Lately I've become something of an expert in waiting. Waiting for deliveries, waiting for answers to queries, waiting for the go-ahead on work projects, waiting in queues at the bank. Yesterday I waited nearly an hour for my optician appointment. “Thank you for being patient” he said when he finally saw to me. Have you noticed that they always say that - “thank you” - but never actually apologise or explain? No matter, there was a copy of Tatler to look through, several times, which I found so appalling that it was entertaining and after perusing its photos of the aristocracy, I'm still smiling at the sight of Countess Spencer's voluminous hair. 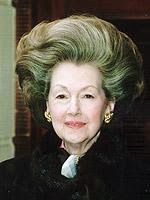 So after the horrible eye test I've been coerced into spending a disproportionate amount of my income on new glasses. Using one of those two-for-one offers which is never really as good value as it sounds, I've a black frame and a turquoise frame on order. I may regret the turquoise... When I got home I couldn't remember what they even looked like so I searched for them online; I found the black ones and then noticed the website's sales blurb that accompanied them:

'Resonant with smouldering embers and charcoal matt black, making this the perfect frame for the unassuming type who is ready to let loose'

I wonder who writes this stuff?  I'm looking forward to letting loose, though!

We couldn't resist playing some Aphrodite's Child on hearing about the death of Demis Roussos.

Dear Demis was undoubtedly groovy at one time although, as a fond friend remarked, in our minds he will always be linked to Abigail's Party. 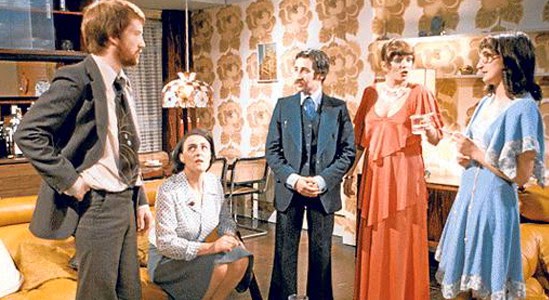 By the way these are not my new glasses... 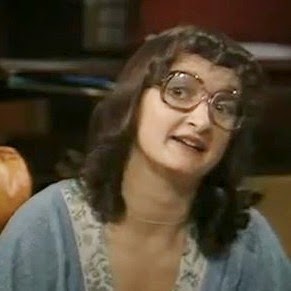 Mike Leigh's play is of course a masterpiece in uncomfortable but compelling viewing. I suppose it taps into the curiosity we generally have about what goes on behind the scenes in relationships and the strange gratification that comes from discovering that things are rarely as straightforward as they might seem.

That was resonant to me last week when I met someone I haven't seen in 8 or 9 years and we were trying to catch up in the time it takes to have a quick coffee. In the course of our general chit-chat she announced that her life had changed, most dramatically, on one particular day in April 2009. “But I won't bore you with all the sordid details...” she said. “No, of course..,” I replied gently, but the voice in my head was going, “Oh do! DO! Tell me everything, the more sordid and detailed the better!” and as I sipped the rest of my coffee I waited for her to drop me some little morsels that I could catch hungrily like a dog jumping at its owner's feet for titbits.  I'm still waiting...

Tomorrow I may have to wait in all day for a courier to collect some artwork, as I'm told he could come any time between 9am and 7pm.  I will not be reading fucking Tatler.
Posted by C at 16:38