Through the past comically

I was given an unexpected early birthday present last week.  It had been tied up in a gold ribbon and tucked away in a corner in the local charity shop.  Honestly, when Mr SDS pulled it out of the tatty recycled Sainsbury’s bag and I laid eyes on its crumpled edges and yellow age spots (it happens to the best of us)… well, the neighbours would have been within their rights to complain about the noise.

That was just at first sight.  Once I’d snipped off the ribbon and excitedly delved into the contents, things just got better and better. 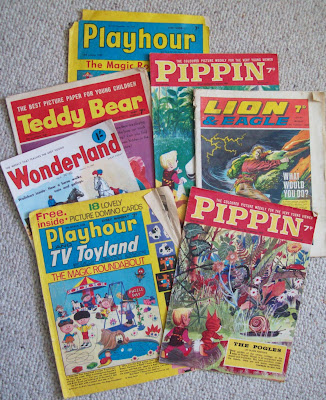 It was a bundle of familiar children's comics from the late '60s.

As if it wasn't about as good as it gets to include my favourite Pogles, there were The Herbs too... 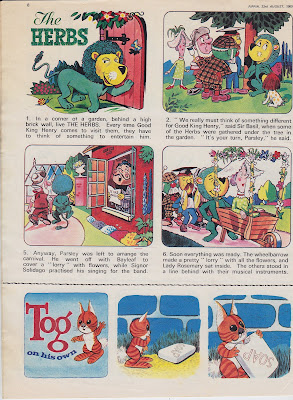 ...and things just carried on getting better with every turn of every page...  Oh Bizzy Lizzy, I wanted to be you. 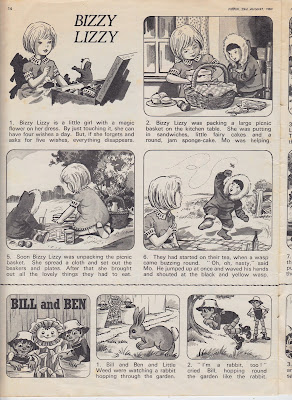 Better and better!  I was in love with Joe.  I've only ever met one other person who remembers him, though.  Fab illustrations.  Ooh! 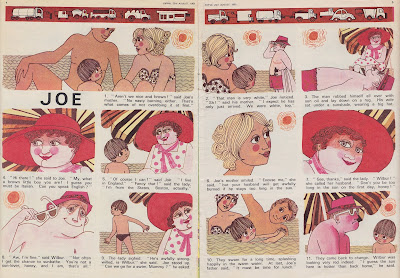 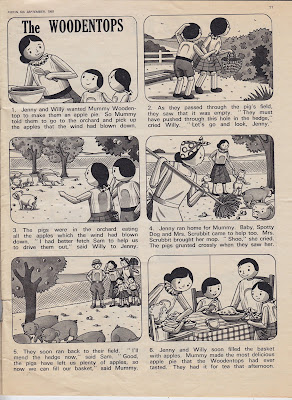 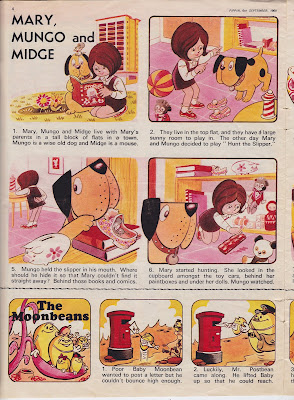 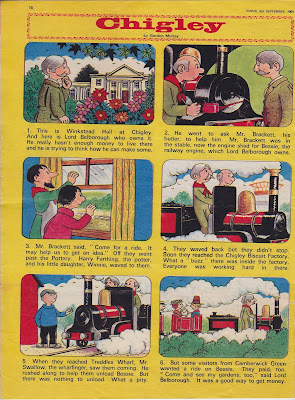 And then there's this...  But, aged six, I liked him so much, he was an artist and an animal lover and he could have taught me to swim, I wanted him to be my Dad.  I know, I know. 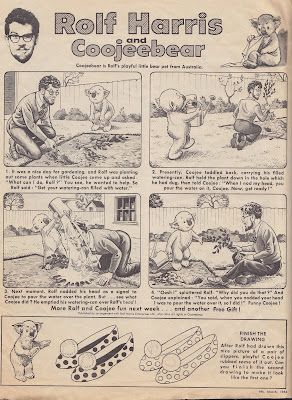 Let's get back to real heroes! 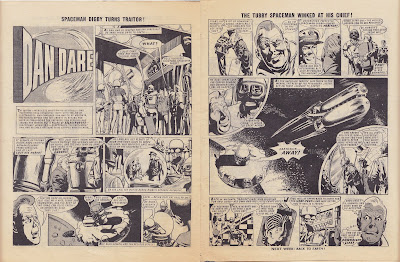 Does that mean I can take the day off to celebrate?  Oh if only!  I won’t be hanging out the bunting and baking a special cake because I’m far too busy freelancing.  But still, time for a quick shout-out to all my fellow freelancers and perhaps we can blow our own trumpets for a brief moment (especially if you're a freelance trumpeter.)

Because freelancing is about so much more than what you actually freelance at.

Me, I’m a full-time freelance illustrator but in order to provide what clients pay me for I also have to be my own unsalaried Bookkeeper / Materials Buyer / Mail Clerk / Credit Controller / IT Manager / Packer / Secretary / Head of PR, Customer Service and Personal Development / Administrator / Building Maintenance Manager, and Office Cleaner.  And Boss.  (I might have to sack the Cleaner...)

There are of course far harder and much more important/responsible jobs but ultimately it's immensely satisfying to know that you've done it all on your own, in spite of the inevitable precariousness of a fluctuating income and those frequent 7-day working weeks.  Plus there's no commuting!  So to my fellow freelancers (6% of UK workers) and your devoted self-reliance, whatever your field:  toot toot! 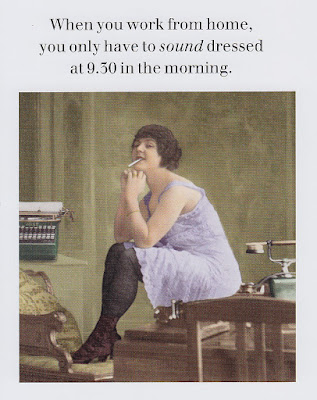 Austin Osman Spare.  What a name!  Sounds like a classic car part.  Is/was he real?  What is/was he famous for?  Hey – STOP what you’re doing– step away from your phone!  Don’t go looking it up on Google or any other search engine.  Because ‘Google’ and ‘search engines’ don’t exist.  The internet does not exist.  Home computers are no more than futuristic fantasies.  You use typewriters and a big plastic phone with a curly lead, that plugs into the wall.  You have no way of finding out anything at all about a character you’ve never heard of before, other than asking around your more cultured friends.

“Ever heard of this guy? He’s featured in this song - Austin Osman Spare.”

Or you could try looking him up in the town library, home to thousands of hardback books with little ticket envelopes stuck to their title pages, but where would you even begin?    All you know is that Austin Osman Spare apparently “painted daydreams”.   He also “painted nightmares” if those lyrics you made a note of are to be believed.  Do you go to the section on Art? - Dewey Decimal classification somewhere round the 700 mark? – peruse the spines of dozens of oversize tomes on the subject in the hope that one might mention him, even if only briefly.   It might at least give you a starting point.  You’ll need your sandwiches with you and a flask of coffee… you’re in for the long haul... running your finger down the tiny index listings in the back pages until your vision blurs into kaleidoscopic patterns.    And even then your search could be utterly fruitless; Austin Osman Spare might not even be real.

We just had to suck it up once upon a time, safe in the knowledge of our lack of knowledge, accepting of the fact that there were some  facts we’d never find, at least not until the internet was invented one day in the future by which time we had probably forgotten what it was we wanted to know anyway.  And of course even that was a fact we couldn’t know.  It was back in the era of typewriters and curly leads when I first heard a song entitled 'Austin Osman Spare' and was intrigued by the person written about in the lyrics, yet unable to discover a single thing about him because of all the above.  We take so much for granted now.

The song was by the Bulldog Breed, a British band who were sort of part psych / part pop / part prog I suppose, and who were around in the late sixties – a musical period I was delving into nearly twenty years after the event, having been too young first time round -  but only much much later was I able to find out that Austin Osman Spare was indeed a real person.  I do like this song with its phased vocals and psychedelic vibe.

As for Austin, he was an artist and occultist, best known for his dark and often sexual imagery and his figurative linework, not dissimilar to the work of Aubrey Beardsley (I really like it).  He was interested in Black Magic and a friend and associate of Aleister Crowley.  Born in the late 1800s, he lived until 1956. Type his name into your favourite search engine and pages and pages about him and his pictures appear. 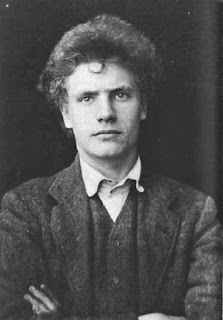 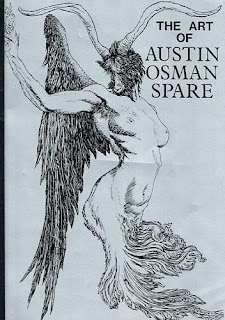 Suddenly I find myself doubting all that I have written above about not knowing who he was for years. How can there ever have been a time when you couldn’t find something out immediately? You hear a name, you don’t know who it is, you look it up online, your question is answered along with dozens of other questions you didn't even ask and you move on, whilst those oversize art books in the town library quietly gather dust.

I guess someone somewhere, who wasn't even born in the '80s when I first came across Mr Spare, might be doing that right now after hearing a Bowie song for the first time.

“Every heard of this guy? He’s featured in this song – Andy Warhol."

"No, sorry. Can't help you there. Have you Googled him?"

Maybe it’s weird, but I’ve developed a bit of a thing for police sirens.  I know it’s not a sound you really want to hear most of the time but I can’t help finding it very exciting.  It must just be tapping into something deep, an  association with danger and illicit thrills. It conjures up flashing lights and cityscapes, neon signs, speed, edginess, exhilaration, a rush of blood and a racing heart.  That must be it….

There are a good few songs with sirens in that I like too.  The Clash’s ‘White Riot’, of course, and the Equals ‘Police On My Back’ spring to mind, but both are from the time before we here in the UK replaced our rather reserved ‘nee naw’ sirens with the far more rousing American style wailing ones.  It’s those wailing sounds that really get me now though, especially when they speed up. Ohh!  This would explain why a song by Jungle has become a bit of a personal indulgence, because whenever I want that little sonic thrill, something to make my eyes flash and my skin tingle, I no longer need to go out and smash the window of the local jewellers.  I can just listen to The Heat and tune my ears into the siren in the background instead.  Ah, if only it was much higher in the mix and went on for longer!