A soul thing for a Sunday morning II

It's a fine, sunny Autumn morning here, and I'm up against a tight deadline with an illustration project, which means I'm off to work in a minute.  But first:


I think this Sunday morning soul thing may become a series of occasional posts...


And here's a sneak preview of the book I'm working on at the moment, just part of an early rough of some polar bears.  A North Pole thing for a Sunday morning? 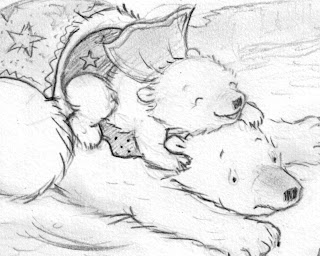 Email ThisBlogThis!Share to TwitterShare to FacebookShare to Pinterest
Labels: a soul thing for a sunday morning, drawing, dusty springfield, spooky

Playing along with the art school boys, part one

When I left school at sixteen I had one ambition - I wanted to design record covers.  It seemed like it would be the perfect job, to create pictures to go with the music I loved.  Going to would be my direct route to this nirvana.  Simple.

Of course the reality was always going to be different.  The Foundation Art course I embarked on at that tender age was perhaps not always as exciting as I’d hoped.  There were definitely some fun moments, but ironically many of these were outside the curriculum – drunken afternoons at the end of term and  adolescent pranks with studio props (a favourite being to wrap up lumps of cow-gum glue in Toffo wrappers and pass them off to a hapless friend as real sweets…)  But a lot of time was spent on  more prosaic practices such as the rules of perspective, drawing from life and understanding the colour spectrum.  I didn’t get to design any record covers at all. 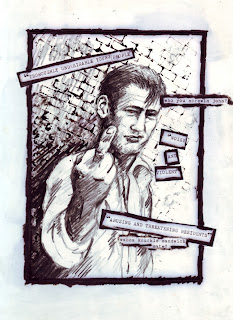 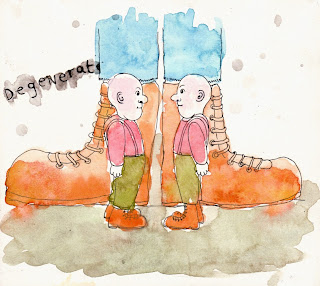 Some rather embarrassing college work from 1980.  Who needs the great masters when you're making pictures like this..?!

With the benefit of hindsight  I think I might have tackled that first year differently.  I might have paid more attention to the technicalities and spent less time pondering on what I was going to wear each day (ooh - Siouxsie T-shirt or holey jumper? Leather jacket or charity shop raincoat?)  Perhaps I would also have taken more of an interest in the Art History lesson which we were obliged to attend once a week.

Sadly, I truly didn’t appreciate the relevance of learning a bit of background to a subject so vast - didn’t realise the benefits of opening up to the bigger picture (excuse the pun).  My world was small and self-obsessed.  So, I’m ashamed to say, the two hours a week watching a film about the Pre-Raphaelites, Surrealism or the Impressionists  became an excuse to do anything but learn or open up to such greatness.  I daydreamed in the soporific half light, and contemplated the latest episode of ‘Monkey’ or the thought of having a Findus crispy pancake for tea.  The most artistic thing I did during Art History was the occasional doodle in my notebook, in which only a few cursory educational notes had been jotted down : “, 1400s, Botticelli.”   120 sleepy minutes would pass in which I barely even noticed his Venus.  And then it was home time (no doubt to watch ‘Monkey’ and have that Findus crispy pancake for tea.)

So I was totally unprepared when it came to sitting the Art History ‘O’ Level exam at the end of the year.  What was worse was that, somehow, I got the day of the exam wrong.  I thought it was on the Thursday, but it was on the Wednesday.  I’d presumed I had Wednesday off and the house to myself - such bliss.  So I stayed in bed for an extra hour.....only to be suddenly and unhappily awoken by a phone call.

It was my Art History teacher. "Where are you??? The exam starts in half an hour...!”
“Oh no…”   It felt like a large stone had been dropped inside my stomach as her words assembled themselves in my brain. “Oh NO! I’ve got to get the bus… I don’t know when the next one is… erm…” The rock in my gut felt even heavier.
“No, you’'ll be too late!  I'll come and pick you up in my car.  Now."
Oh shit.  College was eight miles from my home.  She’d be here in less than half an hour.

Not only did I have to face an exam and the wrath of my tutor, but I had to get ready.  Hair!  Oh no! Would there be time to spike it up? Oh hell, could I go to college with non-spikey hair?  Oh fuck.... could I?  And what about make-up?  And clothes? What was I going to wear?  I quickly rinsed my bed-curled mop, unsuccessfully tried to blow-dry it upright, smudged black kohl around my eyes and pulled a smelly, crumpled mohair jumper out of the linen basket where it had been awaiting a much-needed wash.  No time to even finish my bowl of Ricicles before Miss Art History pulled up outside in her Morris Minor Traveller. 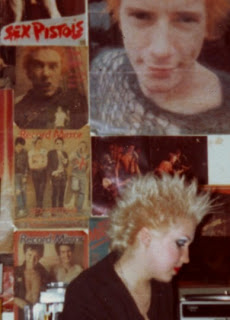 It took a long while, not to mention a lot of egg-white, to get my hair to defy gravity this way...

Anyway I got into the exam late – flustered, embarrassed and, worst of all, with floppy hair - and I was all over the place.  I hadn't a clue.  I tried to recall as much as I could - something about in the 1400s and Botticelli? - but I knew it was doomed.  It was awful.  And when the exam was over all I wanted to do was go home (I had nothing to stay for) but - in the hurry to get out that morning and with not needing to catch the bus -  I only had 12 pence on me. 12 pence was enough to buy a whole packet of Polos, but only a tiny fraction of an eight-mile bus fare. So I decided to walk.

It took me nearly three hours.   I got offers of lifts from a very persistent biker (who kept turning round, coming back and asking again) and a rather pushy lorry driver who scowled nastily at me for rejecting the invitation of a ride in his cab.  I think he had a different kind of ride in mind.  I refused both, and continued on blistered feet – eventually getting home to be greeted by my mum, who was now back from work, with a cheery, “Good day at college, dear?”

An art history film with a difference.  The artist, Guiseppe Ragazzini, uses pieces
of masterpieces by Botticelli, Da Vinci, Giotto, etc. in this collage animation...

The first pet you ever had...?

I know it’s not very rock’n’roll compared to my previous ‘firsts’ posts (first album, first gig, first T-shirt) but it’s just one of those subjects that I’m sure a lot of people can relate to.  I think everyone I know had a pet when they were a child.  And, strangely enough, it seems like certain ‘types’ of pets go in and out of fashion - and may even be linked to certain eras.  So perhaps there are more resonances to albums, gigs and T-shirts than I first thought?

Tortoises, for instance.  Tortoises were very popular pets here in the seventies; unfortunately for them they were being shipped to the UK from more exotic climes in huge numbers, cruelly packed in appalling conditions – a great percentage never made the journey.  But the lucky few that survived were quickly despatched to pet shops around the country and bought by enthusiastic children, many of whom had been watching Blue Peter (the TV programme no doubt responsible for impulse purchases of border collies, tabby cats, parrots and, indeed, these slow-moving, land-dwelling reptiles).  Many of these cold-blooded characters must have been relocated to small British gardens where they somehow coped with our often chilly, damp weather. Many would have had their names (or owners’ names) painted on their shells and occasionally may even have had chains or ropes drilled into them (nobody questioned whether or not this process would have caused them any stress or pain).  So I was not unusual in being the proud owner of a tortoise in the seventies.  Timmy somehow managed to survive a few winter hibernations in a cardboard box in the garage (and his name was never painted on, nor his shell ever drilled into).   He enjoyed a diet of dandelion leaves and bananas and had a remarkably runny nose out of which he could blow the most impressive little bubbles of snot.  I could relate to him rather well at the age of nine.

But Timmy was not my very first personal pet.  My first was a goldfish.  During a trip to the local fair my sister and I each won a goldfish sealed into a tiny polythene bag of water.  I’d probably despair at the number of these ‘prizes’ that were flushed down toilets soon after being won on the coconut shy – but I’m happy to report that ours were relocated into a rather splendid tank with rocks and shells and all sorts of Neptunian items in it to make them feel a bit at home.

As is the way with naming pets, you have to think of something which begins with the same letter as the creature itself.  Yes, we later did it with Timmy the Tortoise (and subsequently Toby and Twinkle).  But ‘G’ for Goldfish is not a particularly inspiring letter.  And our goldfish were definitely girls.  Eventually my sister decided on ‘Geraldine’.  Aged about six at the time, I was inspired by her lead.  But what other girls’ names sound like Geraldine?  Somehow I missed the point, and started looking for names with that soft ‘G’ sound, same as Geraldine.  Ah – got it.  G… G…. Guuuu...?  I proudly named my goldfish ‘Judith’.  (Oh well.  But you can understand my thinking…)

From inauspicious beginnings in a plastic bag at a small-town-England fair with its rock’n’roll soundtrack and dodgy dodgems, Judith and Geraldine went on to live surprisingly long (and hopefully happy) lives in their comfortable tank chez nous.  In summer they got a holiday in the little pond in the garden, where they got to mingle with tadpoles and the occasional newt.  The rest of the year they were safe and warm on a ledge in the bathroom where we watched them, and from which they had a fish-eye lens view of a human family as we took our baths and used the loo.    I think we got the better deal of the two.

A soul thing for a Sunday morning