Don't need anybody to tell me what to do 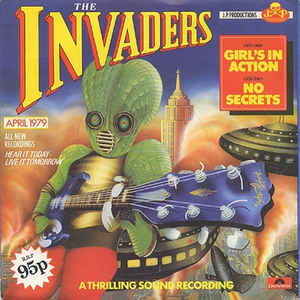 1979!  A favourite year for music for many of us - much discussed and much celebrated for its various genres all of which seemed to rub shoulders quite harmoniously, at least that's how it felt.  For me, 1979 was all local gigs and hormones and 'O' Levels and experimental make-up and, well of course, the one and only John Peel show - which is where I first heard this underrated slice of well-crafted, melodic, post-punky, jangly power pop.  Blimey, what a lot of adjectives.   Although it's resurfaced on a few comps, I don't think I've heard it in all the years since, but the other day it actually came up in conversation and on being reminded I was once more sweetly smitten.   I was also 15 again, knees tucked up on the black corduroy sofa wearing huge hard plastic headphones which made my ears too hot, listening to late night Radio 1 on a school night, distracted from the dread of tomorrow's Maths lesson by the excitement of new bands, new records, new possibilities. I could be your girl in action!

So here I am fully appreciating this 40-year old single in a whole new light, so much so I can forgive them that misplaced apostrophe on the cover.  Hope you do too.


The Invaders: Girls In Action

Email ThisBlogThis!Share to TwitterShare to FacebookShare to Pinterest
Labels: 1979, girls in action, the invaders

Around this time last week I was sitting on a bench at an unfamiliar railway station in Essex, drinking coffee from a paper cup, reflecting on the day I'd just had.   I wasn't supposed to be at this station, and although I convinced myself that an erroneous info board at Liverpool Street was to blame, maybe I was just guilty of being tipsy in charge of a train ticket…

I was sure it had said Platform 18, but I’d been running to catch it, and what with the hurried flurry of girly goodbye kisses with only minutes to go and that extra glass of Chardonnay that the first glass lured me into having – on an empty stomach too – well….

Anyway, no harm done.  I knew where I needed to get to and how, and I’d  had a brilliant day with my old schoolfriends.  We’d just absorbed the vibrancy, the lovely blurry buzz that personifies a central London pub at 6pm on a Friday evening.  It’s infectious and it made me want to stay in the city all night, to stay up all night and breathe it in, diesel fumes and all.  Talk about the bright lights - they have me like a moth.

So, this time last week - a cold station bench, a warm coffee, a mild Autumn night and that wine gradually wearing off as I waited for the (right) train.  I'm always happy in these moments of just observing, just thinking.

I was reminding myself of the small group of heavy metal fans in that pub earlier, how their style had me feeling oddly nostalgic  – all sew-on patches, leather and denim jackets with cut-off sleeves.   Bloody hell, I haven’t seen that look in years, and it suddenly struck me how old-fashioned it is.  I’m quite comforted by that.

My mind travelled through the day again – how my friends and I were dazzled by sapphires bigger than Custard Creams and a frankly excessive amount of gold,  troubled by evidence of archaic torture and equally troubled by prices in the gift shop.  We'd climbed hundreds of stone steps and queued with some bearded American tourists in baseball caps and three-quarter length shorts who looked like they should be in a sort of Blink 182 soundalike band….   And I fell in love with a raven.

You can probably guess where we went... 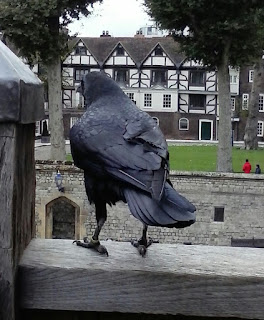 I‘d read about the Tower of London ravens recently and there was a fantastic snippet of info that I intend to commit to memory: ‘Raven George was dismissed for eating television aerials and Raven Grog was last seen outside an East End pub’…  I love that.

Anyway, yes, a little later than this time last week I got home eventually, but still buzzing.  A trip to the city always leaves its mark on me -  a restlessness which follows me around for a few days after I've been there. All sorts of memories, feelings and previous experiences get woven in.  Just like the wine, it takes a little while to wear off.

And, talking of being in the capital, here's a song I keep hearing on 6 Music from Australian band The Rolling Blackouts Coastal Fever, and have rather fallen for too.  I like the distorted, watery guitars, the little signature theme, the slightly melancholy edge and the way it all goes a bit psychy at the end...

The Rolling Blackouts CF: In The Capital