The first T-shirt you ever wore...?

I don’t know about you but I find I just can’t wear band-name T-shirts any more.  I can wear other logos, art and random images across my chest when I’m in the right mood, but band names - no.   The funny thing is that I don’t wear them now for exactly the same reason that I did wear them once: because the name you’re displaying immediately puts you into a very specific box.

The first T-shirt of that ilk that I ever had was one I loved wearing ‘til it was almost threadbare.  I even remember getting it - I had just turned 15 and I’d gone to London on the train (with my mum!) with the sole purpose of coming home with something special for my birthday.  The Clash T-shirt that I found in a little shop in Carnaby Street fitted the bill - as well as me - perfectly. It was special – and, yes, it put me into a very specific box.

It was a tone-reduced black and white photo of the band standing in a street looking seriously cool, all zippy jackets and skinny trousers, with The Clash above (same typeface as on the first album) in a screen printed rainbow of neon colours.  I can remember looking through the rack, and even though there were several of the same main design, the colours were all very slightly different, so I could pick my favourite.  I wore that T-shirt frequently (if only I could have worn it to school…)  and thought it went very well with both leopard-print and paint-splattered trousers or those early straight-legged jeans which I wore over black monkey boots.

So that was my first…. I wish I had a photo with me in (or out of) it, and maybe someone else does somewhere, but sadly I don’t.   No doubt if I had kept it I could sell it on ebay now as a vintage item for an extortionate sum, but instead it went the way of all my subsequent band-name T-shirts, i.e. to one of three places – the charity shop, the rubbish bin, or the cupboard under the sink to fulfil a new role as a cleaning rag…

I have hardly any decent photographic records of other T-shirts either but there have certainly been a few since that one bought in 1978.   Here we have the rather mixed bunch of Crass, Bauhaus and the Dread Broadcasting Corporation (so not strictly a band  but it shouted to the world that you liked a bit of dub…) 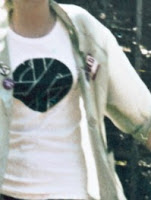 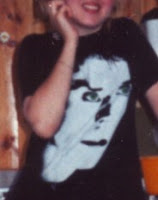 Later I sometimes designed my own one-offs too, using Dylon and a fine paintbrush, or the basic screen-printing kit bought from a craft shop.   But whether bought or studiously painted, they all meant something important for a while.  They told the world who you were into - really into.  I mean, back then, wearing a Ramones T-shirt meant you were into the Ramones. You know what I’m saying…
Posted by C at 20:53 10 comments:

They say love can move a mountain

I looked through some old photos recently and was struck by just how much brown there is in them.  Brown carpets.  Brown sofas.  Brown curtains.  Brown cushions.  Brown wallpaper.  And it started me thinking about…. well, yes: brown.
I’ve a strange relationship with this colour.  So many things that I like in life come in different shades of it… lovely natural things including various birds, Autumn leaves and small mammals.  Some of my favourite foods too… really well-done toast, smooth dark chocolate and a nice oaty Hobnob with a cup of (brown) tea.
I think the early seventies were probably brown’s heyday in interior design and, as these were my formative years, I have strong memories of those burnt sienna, raw umber and oatmeal designs that dominated most households. Rustic-looking coffee sets were all the rage, with strange extended knob things to hold onto instead of traditional curved handles, as if to replicate some kind of ethnic or peasant look – always in natural browns.  Plates and bowls frequently seemed to be decorated in brown squirly and geometric patterns or very stylised flower shapes.  And around this time I also joined the Brownies! So, for me, in spite of all the glitter and colour being worn by the glam brigade, the seventies were brown.
Well, that was OK  until I started secondary school and was expected to wear this colour in its most drab form - day in, day out - for the next five years.  The insipidly beige blouse and conker-brown skirt were compulsory and (for some reason I’ll never understand) so were the dark brown knickers.  (I mean the colour, not just the wearing of them…)  Brown became the colour I associated with the science lessons I couldn’t comprehend and the games sessions I tried to skive off from.  Brown meant getting up early and having to go outside in sub-zero temperatures during winter breaktimes. It represented that feeling of being afraid to cough during morning assembly and the dread of those fuddy-duddy teachers with bad breath.  The day after I left school I threw away my uniform and vowed never to wear this colour again.
Home décor seemed to favour brown for some while after the seventies too.  So in every rented and furnished flat I lived in subsequently there was a predominance of it (all the photos below are from the 1980s, apart from the Brownie one..) and I don’t think I’ll want to see another piece of brown-patterned wallpaper as long as I live.  But I’ve gradually come back around to it for other things. Every so often they say “brown is the new black” and that it’s the more complimentary of the two to the, ahem, mature complexion, so I’ve reintroduced it to my wardrobe over time.  Apart from one thing, that is.  Never again will I be wearing brown knickers. 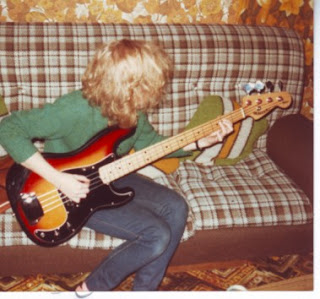 Every shade of brown imaginable in just one small room 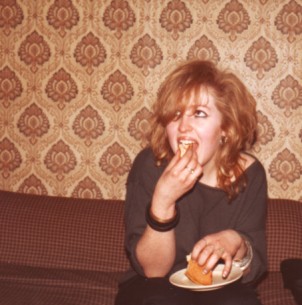 Hmm... chocolate brownie to follow? At least it won't show if I drop crumbs 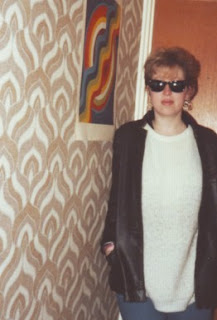 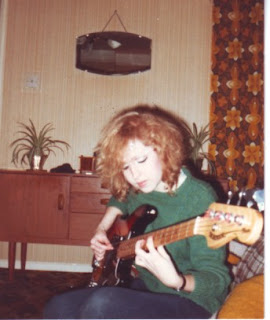 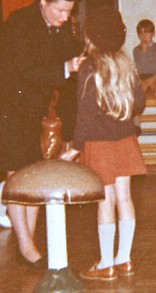 I should never have become a Brownie
And here's a song I loved at the time that mentions school uniform (still sounds good to me﻿...)
Posted by C at 23:42 4 comments:

Stepping out of the Shadows

If I try really, really hard I can just about manage to obliterate all images of Hank Marvin from my mind when I hear this.  No disrespect to him or the other Shadows but, any time I’ve listened to them (not often, I grant you), the vision of that three-step stationary waltz thing they do just makes me want to stop…
But when I get that thought out of my head, I can play this song and imagine something altogether different.  Maybe a dark little sixties club with painted murals of stylized flowers on the walls, some hip young things dancing (not the three-step stationary waltz), plenty of purple and green silk, and pale lipstick?
If you don't already know it, this Shadows instrumental is 'Scotch On The Socks'. the B-side of 'The Dreams I Dream' from 1966.  I think it's great.  And once Hank is out of my mind, listening to it just makes me want to go-go...
Posted by C at 09:30 7 comments:

Email ThisBlogThis!Share to TwitterShare to FacebookShare to Pinterest
Labels: 1966, scotch on the socks, shadows

There is something rather magical about a spiral staircase.  Perhaps it stems from a childhood fairytale memory: steep, enclosed stairs winding round inside an enchanted tower, leading to a high, mysterious room with one small window.  Look out of this and, through wispy clouds, there will be an amazing view of deep woods inhabited by unicorns.  Maybe I’m getting a bit whimsical here…
Dreams of ever fitting one inside my real home are banished by the knowledge that it’d probably be a pain to use on a regular basis.  I imagine the difficulty of carrying anything up or down, or vacuuming those awkward steps.  Mind you, if I ever had to get a stairlift fitted, it could be fun - like a helter skelter in slo-mo, or even reverse  - although perhaps likely to bring on a few dizzy spells.  But, still, every time I see a spiral staircase (which is less frequently than I’d like) I get a tiny flicker of excitement, a kind of internal “oooh!” and a very strong desire to climb it.
One spiral staircase I did indeed ascend, and descend, several times, was this one: 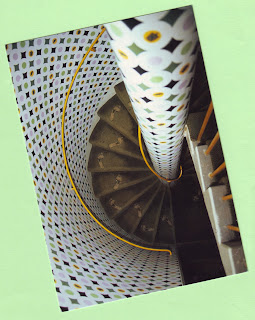 I bought this postcard (of a fabulous photograph by Sharon Kusunoki) in the early ‘90s when I spent a week at in .  West Dean, where you'll find the spiral staircase pictured, is devoted to courses and workshops in the arts and crafts, but it’s not just all the creativity which goes on inside this stately home which is fascinating.  It is a like a mixture of museum, curiosity shop and art gallery inside too - crammed full of unusual artifacts ranging from a stuffed giraffe to one of Dali’s original Mae West lips sofas.  Everywhere you look something catches your eye.  All these weird and wonderful items were collected by West Dean’s previous owner, Edward James.
Edward James was a poet and ardent supporter of Surrealist art.  He was friends with Dali and Magritte, and his vast array included works by Pablo Picasso, Paul Klee, Hieronymus Bosch and Max Ernst.
The thing I love about this spiral staircase though (aside from the Alice In Wonderland feel of the décor on walls and pillar), is the carpet.  Apparently one day Edward’s wife (dancer, actress and painter Tilly Losch) stepped out of the bath and left a trail of wet footprints on the stairs.  Now I do this frequently but as yet nobody has rewarded me with a gesture of undying love for doing so, which is what Edward did for Tilly.  Inspired by those wet footprints, he commissioned their pattern to be woven into the carpet.  It’s just a shame that the marriage didn’t last as long as the flooring…
And it’s also a shame you can’t buy anything quite like this in Allied.
Posted by C at 19:18 4 comments:

But is it art? 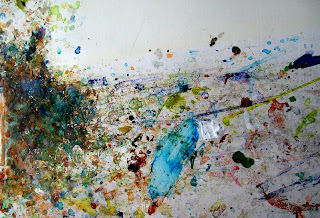 Several months’ worth of accidental paint spills and splatters on the white-glossed bench where I work.  This is how it looks today.  Next week it will be slightly different from this, and last week it was too.  Eventually it may end up as one big mess of brown, just like when you keep rolling varied colours of plasticine together and everything merges.  But today the hues are looking pretty vivid. 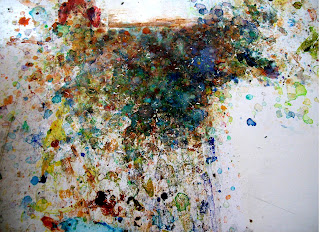 And here is my water pot, with its layers of accidental embellishment from every time I wipe a paint-loaded brush against its edge.  I’m sure if I consciously tried to decorate ceramics like this, I couldn’t achieve this effect.  Next week more trickles and drips in different colours will join these - the look is transient. 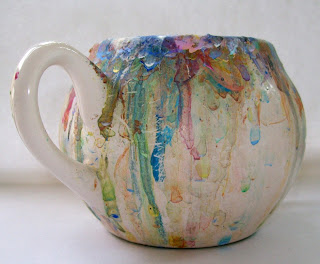 I just think it's all rather beautiful.  It makes me glad I'm so messy...