Abstract moment of the week #9

I think the manufacturers of these protective gloves must be having a bit of a laugh. 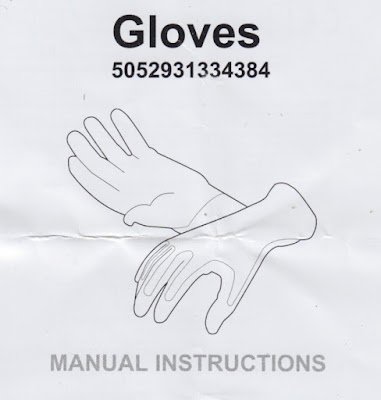 Tribute to a remarkable, much-loved man

If you’ve been following the life and times of Matt Johnson and The The, you probably know that they have just embarked on a really special comeback tour but also that last weekend in the midst of this, Matt’s father died unexpectedly.   I know that he and his brother, and the whole family, are absolutely devastated at this huge loss and my heart goes out to them all; my deepest sympathies.  It is so very sad and perhaps especially poignant at this time.  Eddie was a remarkable, much-loved man and I can say this with conviction because he had also become very dear to me personally.

I am actually still struggling to believe he’s gone.  He was such a big character that I just felt like he'd go on forever.  I was going to pop round this week for our usual cup of tea and a natter (and a big slice of cake or a Belgian bun, he always treated me!) - something I’ve done dozens of times in the last couple of years.  Through the deep sadness following the illness and death of my good friend, his eldest son Andrew, it was something so positive; we had formed a lovely, easy connection of our own.  At first it was really that we had Andy in common and took comfort from that, but it soon became a unique friendship in its own right.  It was perhaps an unlikely bond given our age difference, but Eddie had a presence and timelessness about him which meant you could relate on so many levels and age was no barrier at all.  As I said to a friend the other day, how many octogenarians are likely to talk to you about anything and everything from jellied eels to Johnny Marr?!  I remember coming home from seeing him one day, smiling to myself about the fact that our two hour conversation had just ranged through so many subjects, from Brexit to Auf Wiedersehen Pet to pease pudding to J G Thirlwell!

Just like Andy, he was a fantastic conversationalist with a cheeky sense of humour and I never tired of the tales of the extraordinary life he had led in his eighty-plus years.  This was a man who had mingled with some of the East End’s most notorious characters in his days as landlord of a popular pub, a venue where he’d also had the Small Faces rehearse in an upstairs room.   He had also coped with more than his fair share of tragedy.  And he could tell you fascinating stories about the past, but was not stuck in it.  We frequently talked about politics and current affairs, and he taught me a lot; in return he seemed to enjoy it when I shared some of my knowledge on subjects close to my heart such as birds and nature.

But even more than all the things we enjoyed in conversation, he was caring, warm and generous, a great father to his immensely talented sons, and he allowed me to feel so included, being supportive and interested in what I was doing too, and  I valued that.  I just wish I could pop round for a cup of tea with him now and tell him - but I think, and hope, he knew.

I mentioned in my last post how "it felt like I’d grown up fast" the night I first went to a gig without my friends.   I also mentioned that I had quite liberal parents, who had no issues with me seeing bands and getting into punk in my early teens.  I suspect they also knew that the smell of Polo mints on my breath whenever they picked me up from a night out was only there to hide the whiff of cigarettes and alcohol, but they never said anything.  So it was all pretty good, back in ’78 and ’79, and I have such fond, vivid memories of those exciting and undoubtedly pivotal years.

It had been on its last legs for a long while, to be honest.  I’ve made no secret of it: my mum suffered from clinical depression throughout her adult life and had had some pretty horrendous episodes.  At the same time, she and my dad were becoming increasingly incompatible; the two things were somewhat intertwined.  To cut a long story short, my father left home when I was 17, after a weird and painful break-up.  He's never shown any interest in me or my life in all the years since, which feels more shitty now in retrospect than it did at the start,  but that's another story.  Going back to when they split, I witnessed a lot of shouting, tears, and even some broken crockery.  Oh and mum playing David Bowie’s ‘Aladdin Sane’ album in the early hours (I couldn’t fault her taste there – a great album - but I can’t disassociate it from that period!)

Anyway, when my father finally left, my older sister had just moved out too, and so there was a really odd and uncomfortable period in my life when it was just me and my mum living at home, and my mum was suffering from depression.  She'd been hospitalised for it before so I was familiar with the scenario.  Sometimes she would spend days on end in bed, and I’d have to go and get her prescriptions and take care of her, which - being a snotty, self-obsessed teenager - I resented.  It's kind of what makes you resilient, though - natural teenage selfishness!   At other times she’d be up and about but behaving strangely – her actions could be a bit over-the-top or misjudged.   Not that it was always easy then for me to discern between what was strange and what was normal, because she was my mother – she was all I knew.  However, I realise that this is the reason why I sometimes still feel a certain discomfort if life around me gets a bit chaotic, and why I also feel the need to steer clear of anyone or any situation which might be toxic in some way. Do you know what I mean?  Some people seem to get off on all that in a weird way, but there are so many toxic people - toxic relationships - that can bleed into your psyche if you let them.   I just can’t go there, I need to protect myself .  One whiff of toxicity (it’s just like that smell of Polo mints masking cigarettes and alcohol) and I’m out.

But at the same time, something very positive came out of it, because I learned that I simply couldn’t depend on either parent at that time and thus, ultimately, I only have myself.  It sounds harsh but it was as if there was no role model I could really lean on mentally because one was absent and the other could be a bit doolally.   It felt as if there was no big, strong, 100% reliable, parent figure who could make everything alright.  Whilst leaving me feeling a little cast adrift -  unsafe, even - it also quickly instilled in me a very deep and strong sense of self-reliance, self-sufficiency.   I'm a big believer in the notion that we all need to take responsibility for ourselves and our lives, so much so that it irks me when other people don't.   I read somewhere recently that this often happens when the parents of teenagers divorce (which may be a different effect to that on those who are very young); their children quickly learn to develop their independence.

People have far worse situations to deal with when growing up so I've nothing to complain about, but the way our experiences shape us is something that fascinates me and I'm interested in the psychology of why we develop the way we do, and where some of our attitudes and characteristics come from.  I'm pretty sure the way I feel about self-reliance is as a result of my odd home life in those teenage years, and it developed in me an innate determination to achieve my personal goals and not to expect nor depend on help. Maybe it’s no bad thing sometimes to have to grow up a little fast.