Abstract moment of the week #12 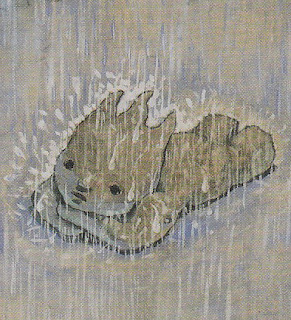 It’s a dark, doomy, gloomy world out there isn’t it, and a little light relief can sometimes come in the most unexpected of forms.  But... in the form of dog shit?!  Surely not, I hear you say.  Then let me introduce you to Puppy Poo.

Some years ago I was lucky enough to visit the Bologna Children’s Book Fair, it’s full of wonderful books and the work of some fabulously talented illustrators from around the world as you might imagine.  A brilliant experience, but overwhelming.  When it comes to artwork, it’s particularly interesting to see what’s being produced in countries with cultures very different to our own – I remember being fascinated by Middle Eastern and Asian approaches to illustration in particular, and the subjects tackled in their children’s stories, so I picked up a load of their publishers’ catalogues to peruse more sedately on my return.

Well, you know, I went through them of course, but then they get put away in the back of a drawer like so many things one collects on one’s travels, and it was only when I started having a good old clearout earlier this week that I decided to take a proper look.  This was when I found the Korean children’s book ‘Puppy Poo’.

Here’s the description, and you’ll notice the delightful illustration of a puppy actually doing its doings on the cover, if you’ll excuse the way I’ve phrased that.  Click to enlarge (if you want, they're fresh from my scanner;  I did wash my hands.) 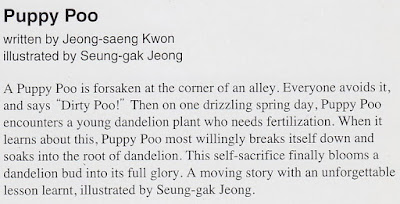 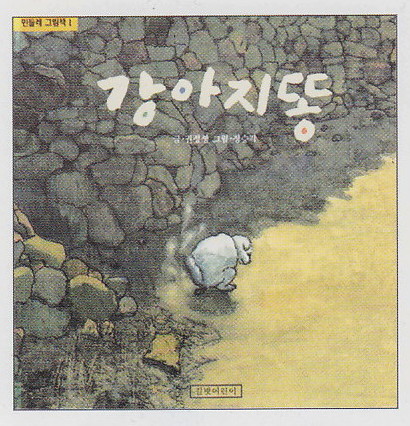 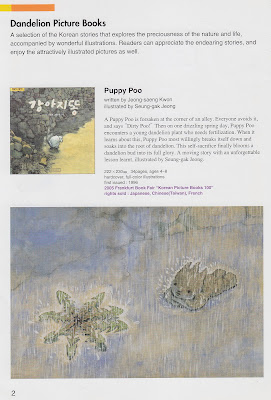 This publisher's catalogue is going back many years so, being curious of mind (that's all...), I wondered if there was anything about this unusual book to be found online.   There is.  In searching for it I discovered that Puppy Poo, or more precisely here, 'Doggy Poo', is actually quite a celebrated character in Korean animation. A role model, one might say, the hero of a fable, an example to all.

So, my treat to you today - the trailer for the absolutely genuine short film for children, ‘Doggy Poo’.

Even turds contemplate the meaning of life...

From Wikipedia:  After being "created" by a dog, Doggy Poo meets various living and inanimate things.  No-one wants to be his friend, and Doggy Poo becomes sad because he believes he is worthless and has no purpose.  Eventually a plant grows out of the ground and tells Doggy Poo that she needs him so she can grow into a flower.  Doggy Poo discovers his life purpose and he becomes absorbed by the flower.  After being absorbed by the flower, Doggy Poo lives "a happy life". 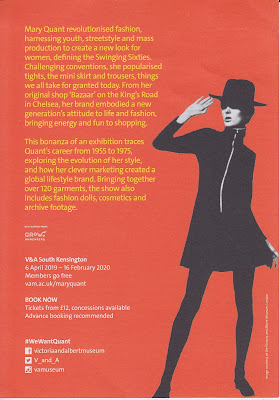 Something that struck me straight away was how few men were there, perhaps not surprisingly.  I only noticed a handful, one of whom was extraordinarily dapper with a liberal sprinkle of quirkiness (I'm sure I spotted sequins); I could just imagine him as an arty fashion designer.  Instead it was mostly women of the more mature variety who were wandering around the Mary Quant exhibition a couple of weeks ago at the lovely V&A Museum in London.  I went along with my sister and cousin (we all fit the above description...) and I loved it.   I also noticed that a number of particularly stylish, elegant ladies, the kind with chic white bobs and good boots, were clearly transported back in time by what they were viewing, chatting enthusiastically to their friends and sharing reminiscences as they lingered over the displays. “Oh, yes, I remember those…!”

Whilst Mary Quant’s fashion designs wouldn’t be considered controversial now,  it was interesting to remind myself that they were really quite anti-establishment at the time.  For a start they broke away from the restrictive corsetry of the previous decades - what a relief that must've been; in doing so they represented a new freedom that was more than just physical.  And they blurred the boundaries of conventional femininity with ensembles inspired by menswear, such as sharply cut suits with waistcoats and ties. Up until this point women simply wearing trousers in public was still quite unusual; embracing an even more androgynous image was sure to raise eyebrows.

“The voices, rules and culture of this generation are as different from those of the past as tea and wine,” Mary Quant wrote in the 1960s.  “And the clothes they choose evoke their lives..” she continued, “…daring, gay, never dull.” 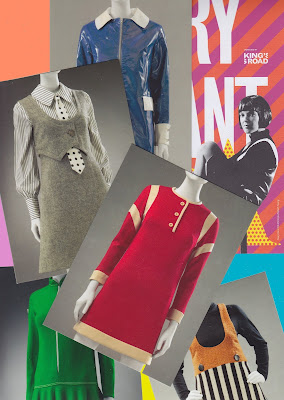 I’m just a little too young to have sported any of the original outfits on show from Mary Quant’s career between 1955 to 1975, but there were a few I honestly wish I could wear now, I must say.  The low-waisted wool jersey dresses, the androgynous trouser-suits, brightly coloured tights and wet-look PVC macs…some fabulous accessories too.   There’s just something about the look (and literally ‘The Look’)  plus the cut of these items that has a timeless appeal, at least to my eyes.  Perhaps it’s ironic that I think that now, being the age I am, when they were really all about youthfulness. 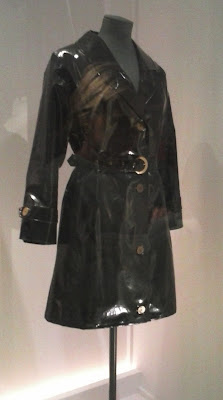 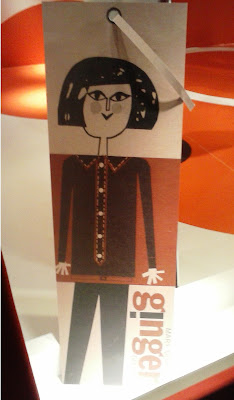 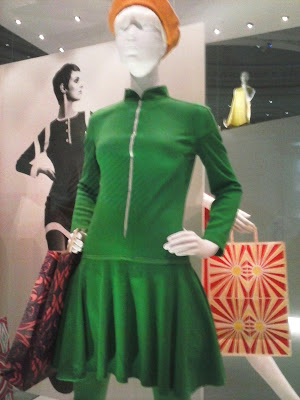 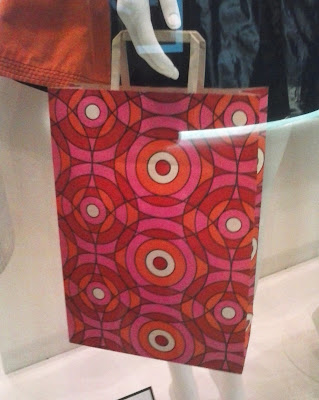 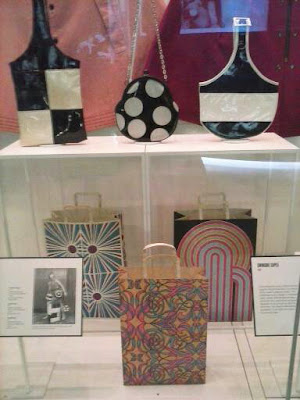 Somewhere deep in the MoD archives, there may well exist a secret file on Mr SDS.  It will contain his personal details from over 35 years ago – his home address, his date of birth, eye colour, even the fact that at the time he had punkily altered his natural hair tint - but most importantly it will have had him classified as a potential threat to… well, what exactly?  The Thatcher Government, I presume.

And all because he played in an anarcho-punk band, one which was closely associated with Crass and who expressed some strong left-wing political views as well as being into pacifism, nuclear disarmament and anti-vivisection, that kind of thing.

I was thinking about this after looking at this rather eye-opening piece in Tuesday’s Guardian (with many thanks to the person who sent it to me!)  It's a fascinating glimpse into something that was really quite sinister.  In East Germany in the ‘80s, being a punk must have required far more bravery and resilience than over here.  Disapproving looks, name-calling and being refused entry to unfamiliar pubs was the norm for many of us who looked a little alternative in our youth, but it’s hard to imagine being automatically pulled in for questioning (or worse) by the authorities, not because you were actively protesting or involved in threatening behaviour at the time but simply because you sported an image that represented your musical taste and possible associated beliefs.  It’s worrying to think that dressing a certain way could be treated almost as a criminal act in itself; I can’t help but admire the young subjects of these old photos.

Things could still happen, however, when you were in a British anarcho-punk band who proclaimed their political opinions during the Thatcher years, and I asked Mr SDS to remind me of one particular incident.

It was 1982, and the band members were going to take some photos for their forthcoming album in a secluded spot in the countryside.  Not just any old place though; this was an area they had specifically chosen for its proximity to the site of a ‘secret’ nuclear bunker, a sophisticated fallout shelter designed to accommodate the Government in the event of such a catastrophic war.  Apparently the shelter itself, which had been paid for with public money, was a deep underground complex with blast-proof doors and was capable of holding up to 600 people. (Oh, imagine – all those politicians and their associates becoming breeding stock for a whole new post-apocalypse world!)

Anyway, maybe choosing somewhere so close to this sensitive location was asking for trouble but still they were surprised when, as soon as they’d started setting up their backdrops and banners to photograph, a man appeared seemingly out of nowhere to confront them.   He was pretty aggressive.  “We don’t need CND yellow-bellies like you around” he told them, amongst other things, and ordered them to pack up their stuff and leave.

After a brief discussion they returned to their car, the man following them for a short distance before turning off.   They thought that was the end of the matter but within minutes, again apparently out of nowhere, a police car had started tailing them.   Mr SDS said it seemed strange how quickly it appeared and they just thought it must be coincidence at first, but no, next thing you know they were being pulled over.  From then they were questioned and their vehicle thoroughly searched.  The officers had them unfurl all their backdrops for examination and even confiscated the photographic film – then took notes on their personal details and physical appearance on the spot.  Indeed Mr SDS was even quizzed about that striking hair: “Is this your natural colour?”

When they were finally allowed to continue on their way with nothing to actually incriminate them,  they were offered a stern warning, or was it more of a threat?

"WATCH OUT IN FUTURE".

It seems no coincidence that shortly after this incident some of the band members' post was delivered to them, already opened...    Who knows what other surveillance was going on?  I have to wonder too what happened to those files! 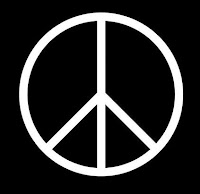 Have you ever had a brush with the law for your political beliefs, or even the way you looked?  I'd love to hear.
Posted by C at 22:35 15 comments: