“… The nearest thing to having wings and flying yourself,” said Joy.  “Gorgeous!” was the word Mary used.  I never thought I’d be writing about it here,  but having found myself unexpectedly drawn in by a BBC Four programme on Monday night, I too found myself  enamoured with a tiny single-seater fighter ‘plane, the wonderfully named Spitfire.  I was also enthralled by its pilots. 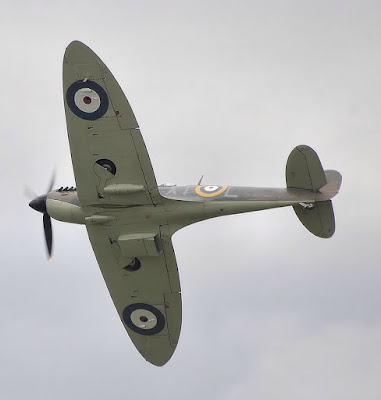 Joy Lofthouse and Mary Ellis, who both died in the last few years aged 94 and 101 respectively, were among a particularly unusual group of women who piloted ‘planes during WWII as part of the 'Air Transport Auxiliary'.   Bearing in mind that this was at a time when it was thought odd that women would even want to fly a ‘plane, you realise just how special a job this must have been and how much it defied convention.  These ‘Attagirls’, as they were known, flew thousands of warplanes, usually delivering them from factories to RAF air bases, solo and without compass or radio help, navigating only with maps and following railway lines or rivers.  Although not involved in combat, they still faced danger daily from enemy attack or collision with the huge barrage balloons that were deployed as anti-aircraft obstacles.

And as for the male fighter pilots – I find it hard to imagine just how they handled it, many of them aged just 18 or 19, cooped up in a cockpit so small that they had to get into it sideways, tasked with intercepting, outwitting and shooting down enemy aircraft.  There they were, alone in a lightweight metal killing machine that could reach a speed of nearly 400mph - feeling the fear, knowing it was “them or us” – as anyone in a direct conflict situation surely must.  Several of these surviving pilots appeared in the programme and, in voices weakened by the intervening decades, solemnly expressed their hatred of war.  But their love of the Spitfire was indisputable.

As with classic cars, especially the small, sleek, sportier ones, I think there's something about the Spitfire which is aesthetically pleasing.  I like its scale and simplicity. Seeing them in flight is like watching swifts; graceful, wheeling, fast, intrepid.  Maybe my love of birds and the excitement I feel when I witness their aerobatic displays is linked, I don’t know.  Whatever, although aeroplanes aren’t exactly my thing, I can absolutely understand the appeal of this diminutive yet high performance model.

Mary Ellis was particularly fond of the Spitfire and one day, on delivering a new one from the factory, she signed her name on it.  The airplane in question was never used in combat and survives today - along with her youthful signature.  On being asked, just before her 100th birthday, why she'd done that, she said with a gleam in her eye that it had really just been a romantic thing; she’d hoped that perhaps a dashing young airman would see it and get in touch.  At that moment I think I knew just how Mary felt.

The BBC Four programme 'Spitfire' is currently available on iPlayer:

I feel I can’t let this weekend slip by without a little acknowledgement of something very special which should have taken place but which has sadly had to go by the wayside for obvious reasons.

A few of us would have been waking up this morning in an Edinburgh hotel room (presumably not the same one…) ready to greet a couple of days full of who-knows-what exactly, but I suspect it would have involved exploring the Old Town and The Royal Mile, diving into coffee shops, smiles and food and laughter, soaking up both culture and wine, and lots and lots of talking.   A lovely 'mini bloggers’ meet-up' was on the calendar;  one that wouldn’t be too overwhelming for those of us who are less comfortable with big groups and new faces, but perhaps a precursor to more.  For me it would have been both a reunion and an introduction, and my first trip over the border into Scotland too, I was looking forward to everything about it.  Huge thanks to John for getting the ball rolling and making it happen at least as far as it did – that is, of course, until this year's unprecedented events overcame us all.  But it’s just postponed, not cancelled, and I hope some time in 2021 we may be talking about it retrospectively.

In the meantime this presents an excuse to indulge in a perfect post-punk single by a great band who take me back to my youth and who hailed from Edinburgh, plus a lovely video, very much of its time, featuring some of the sights from the city (as well as lots of scarves and slippers...)

Email ThisBlogThis!Share to TwitterShare to FacebookShare to Pinterest
Labels: all about you, edinburgh, scars
Newer Posts Older Posts Home
Subscribe to: Posts (Atom)