Eight arms to hold you 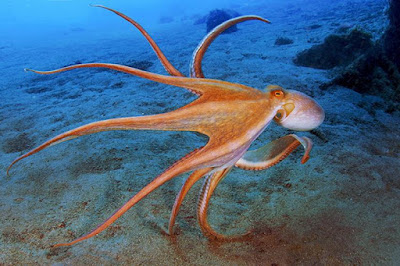 What has three hearts, nine brains, eight legs, blue blood and a beak? I feel sure there’s a joke in there somewhere about the royal family and a pet parrot…. but I think you probably know the answer and it lies, not in the soil, but in the sea.
There is something slightly surreal and beautiful about the octopus and I’ve rather fallen in love with this remarkable creature. Apart from having an overabundance of hearts and brains, octopuses (octopi?) are amongst only 1% of animals which use tools, they are notorious escape artists, they can change colour, texture and shape in an instant, and even regenerate missing arms at will. Once you start reading and learning about them it just gets more and more fantastical.  I've long believed that there's a lot more going on in the animal kingdom than we can even begin to comprehend, no matter how much scientific research takes place.
My affectionate admiration towards them really came to the fore last year after watching, quite by chance, a documentary which focused on the intelligence and behaviour of one particular individual and her extraordinary relationship with humans. In ‘The Octopus In My House’ a professor and his teenage daughter bond with their cephalopod protegée called Heidi. In return, she shows them how she can solve puzzles, distinguish between different people, pass memory tests and use planning strategies. She even watches TV with the family from her huge tank inside the house, moving to the edge to be closer to the screen. I find myself wondering what she’s thinking, but I’m happy just to wonder and not to know.
There is, inevitably, a darker side to their lives too - and they don't live for very long.  Once a female has laid eggs, it effectively spells the beginning of her end. She stops eating, becomes listless and wastes away - the female octopus in captivity even seems to go on an active suicide mission – she's very unlikely to make it through to see her new young emerge.  Nature being what it is, there's no need for her to do so - they'll fend for themselves, and thus it seems octopuses are never going to have a population problem.
But putting that grimness aside, I’ve discovered a whole new form of therapy to help soothe away some of the worries of life in 2020. The other evening I'd been stupid enough to catch up on the news before I was about to go to bed and I needed something to offset all the doom and gloom...  so I tuned into youtube and watched some octopuses.  Octopuses swimming, octopuses playing, octopuses hiding in shells, octopuses interacting gently with the sweeter variety of human, octopuses solving problems, octopuses shape-shifting: job done.  Kittens, watch out.
The obvious choice? Syd Barrett:  Octopus
Posted by C at 17:48 21 comments: