I’ve only got two ‘Observer’ guide books but I treasure them.  I can’t fully explain why – maybe it’s the combination of them being pocket-sized (this always makes things which aren’t normally that small seem extra attractive for some reason) and also that they’re old.  They have an appealing vintage look, feel and scruffiness, like the Penguin paperbacks I’ve written about before on here.  So I’m holding on to my collection of two - well, it’s not as if they take up much room. 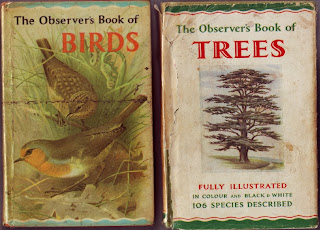 ‘Observer’ books were discontinued in the eighties, after 100 titles had been published in just over fifty years. There is even an ‘Observer’s Book of Observer’s Books’.    I’m not quite sure how they managed to fill two hundred plus pages on some topics: ‘mosses and liverworts’,  ‘sewing’ or ‘glass’,  for instance, but there are others about which I think the opposite, wondering how they managed to condense vast subjects such as ‘modern art’ and ‘wild flowers’ into relatively small volumes.  Birds and trees are just right for these little guides, though.
‘The Observer’s Book of Birds’ was actually the very first in the series.  I’ve plenty of books about birds but I still refer to this one from time to time, it’s simple to use and it doesn’t go out of date.  It also has a notably endearing way of describing bird note/calls phonetically; for example, apparently the bearded tit makes the sound: ‘ “Cht, cht” and a twanging “ping” ’ and the tree pipit’s song is described as having ‘…a sweet rallentando at the end: “tweedle, tweedle, sweet, sweet, sweet.” ’ Well, I’ve never seen a tree pipit nor come across the term, ‘rallentando’ before, but I like the sound of them both already.
I’m somewhat fanatical about birds. It’s just a love thing.  They make my eyes light up and my heart lift.   I’ve tried to analyse many times what exactly it is about birds which makes them special, but I can’t really nail it.  I love the fact that they are the only wild creature we share our lives with so visibly, so obviously, every day.  No matter where you are, whether it’s on a city street or in the middle of a forest, you’re bound to notice a bird at some point.  I love the way they are entirely free-willed but we can still find ways to interact with them – like the blackbird who comes to the back door for sultanas, or the robin who surveys as you do some gardening, almost seeming to urge you to notice him.  You can learn a lot about life just watching and trying to understand birds – recognizing all those behaviour patterns which are not so dissimilar to our own when you consider the basic motivations.  They get on with every aspect of their lives without fuss, clearly aware of us but relatively unperturbed.  The more time you devote to observing ordinary birds going about their business, the more you get out of it, and the more you get out of it the more you will want to share in their lives.
Even when you can’t see them, you invariably hear them and once you’re tuned in it seems you become more aware of birdsong than any other sound.  Earlier today I could hear the jarring metallic clatter of a pneumatic drill somewhere up the road, but the sweet whistling of a territorial robin drew my attention away.  I think there may even have been a rallentando in his song somewhere.
For some reason my love of birds seems to be directly linked to my inability to represent them well on paper.  You’d think it’d make it easier as I spend so much time watching them, but it’s almost as if that’s all I can do: observe.  Observe and enjoy.  My drawings don’t do them justice; maybe I’m inhibited by the challenge of how to capture their spirit and essence, although occasionally I do I try the odd quick sketch… 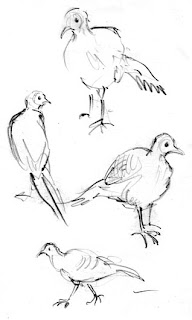 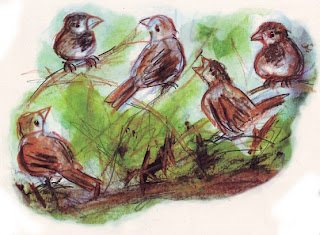 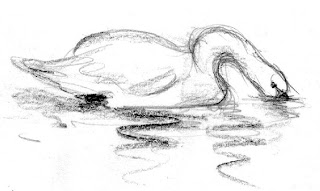 Images copyright C / Sun Dried Sparrows
But I’ll leave the proper pictures to the illustrators of my pocket guide. All I really want to do is see, hear and experience birds for real, and if I’m lucky I may get to hear the ‘ “fullock”…”chirrick” and “quark” ’ of a moorhen or the ‘ “whitz” and an explosive scream or groan’ of the water rail.
A musical tribute - Alan Ross: Blackbird (not the Beatles' song of the same name)﻿ 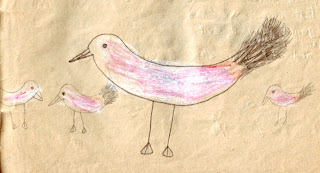 The worst clothes you've ever worn...?

Well, you might look at me now and suggest that the ill-fitting jeans and scruffy black jumper (with holes in the elbows) which I’m currently wearing would be good contenders – and you’d be right – but at least I’m under no illusion that they look any good.  What I’ve been thinking about today, however, is some of those clothes I’ve had and actually believed were decent at the time, but later realised to be the worst things I’ve ever worn. The worst things anyone could have worn.  I know it’s subjective, but I feel sure we can be unanimous about some items.
Maybe the seventies threw up the best (worst?) examples, and I use the phrase ‘threw up’ without irony.  I’m not talking about my punk/DIY clothes – I’ll always look back at them fondly no matter what anyone says.  But there was that time between being a kid and being a punk, and it really was a pubescent fashion wasteland. For instance, I had a pair of white flares.  White.  Flares.  And with my thighs!  I chose to wear these frequently with a fetching, knitted, collared, zip-up cardigan in cream with a black zig-zag pattern.  This woolly monstrosity was loosely based on something I had seen David Starsky wearing in ‘Starsky and Hutch’.  ‘Nuff said.
Then there were those wedgy platform shoes I dared to wear for the walk home from school.  They were too high to be permitted in school (a place where the height of heels was actually measured by a teacher if they looked to be above one and a half inches, and thus a major breach of uniform rules).  So at the 4.15pm bell, I’d change into this pair of brown, lace-up shoes that were attached, somewhat incongruously, to high wedge soles which were covered with some kind of woven, beige, hessian type stuff.  They were like some strange hybrid of footwear and flooring.  The toe area must have been raised off the ground by about two inches and the heel roughly four.  I hobbled and wobbled home in these stupid shoes, and found I had great difficulty getting up hills. This was unfortunate as I lived at the top of quite a steep one.  In order to make it all the way to my front door I had to compensate for the gradient in the shoe with every step, which meant leaning forward from the ankle joint in a most unnatural manner.  Perhaps I should have tried walking backwards?
Some years later I discovered the joy of buying my clothes from charity shops and I got some wondeful items – big old coats, the occasional fifties dress and little suede ankle boots, all of which were a thrill to find and a bargain too.  I couldn’t believe my eyes one day when I saw a pair of black PVC trousers in my size hanging on the rail in Oxfam.  I’d always wanted some PVC or leather trews, but they just weren’t a viable purchase on a student budget.  So, without any hesitation I bought these second-hand ones and started to wear them at the first opportunity. Only problem was, they were a bit, well, cracked, just where the shiny coating had got a little worn away.  It seemed an obvious solution to simply apply a coating of Kiwi shoe polish and give them a bit of a buff with a cloth until they were nice and shiny again.  Easy. It wasn’t until some time later that I realised the black smudgy marks on the furniture (and the bus seat) corresponded exactly with where I’d been sitting earlier….
Talking of charity shops and second-hand trousers, what about these, though…? 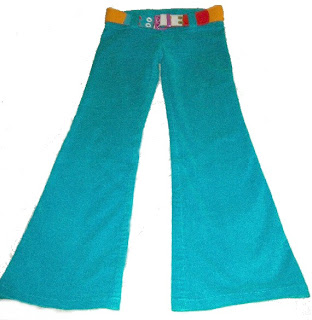 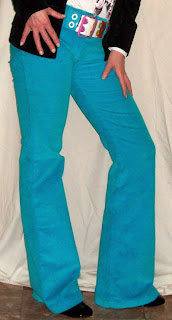 In vivid turquoise cordurouy, complete with a wide plastic multi-coloured belt, these little beauties cost me a mere £2.99 just a few months ago.  How could I possibly resist?  I will admit, though, that I’ve only worn them once, and that was to a fancy dress party.
Posted by C at 21:47 6 comments:

Seems like ages since I last posted.  It’s been - and continues to be - a bit of a busy time for me with work, so here's something brief just to keep things moving. Sandy Sarjeant's frantic leg work seems strangely appropriate to the way I feel right now…
Sandy Sarjeant: Can't Stop The Want
Posted by C at 22:35 2 comments: