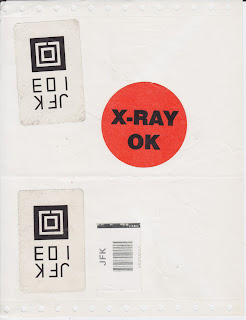 I should’ve posted this a couple of days ago really, but never mind, it’s still a 25th anniversary, give or take a few days!  The anniversary of the very first time I flew.

I had the chance to travel through my work on a complimentary trip.  Free flight, free hotel and free entertainment laid on - I know, pretty good.  Destination New York!  Just for the weekend.  Never been on a ‘plane before and my first flight was to be 3500 miles across the Atlantic – talk about nervous / thrilled / overwhelmed, all at once.

I recorded the experience in real time through a few scribbled notes.   It’s strange when you look back on things like that and try to recapture the memories, not just of where, but also of who, you were at the time.   I loved the feeling of flying,  I remember that.  So enthralled by the beauty and stillness of the world from above that I recall thinking, “if we crash and I die, I don’t care, it’s worth it.”   Must say, I don’t feel the same way now, but it probably wasn’t a bad way to get through my first flight.

So that bit was good before we'd even landed.  Then, the excitement of my first glimpse of America.

I made notes as we came into land:

There are just loads of huge lakes and woodland.   Now more built-up – also lots of boats and light aircraft. Getting ready to land, can see the cars on the roads.

A ride in a fancy stretch limo took us out of JFK and into Manhattan.

Some of it looks like London… until you look upwards!  Impressive NY skyline.  Little old houses in amongst blocks, I scrawled in my small spiral-bound notepad.

I was with a group of strangers, all in similar roles, travelling for their work.  It’s one of those situations where you’re with people, but you feel quite alone really too.  We were taken to a jazz club the first night to eat, the ‘Red Blazer Too’. 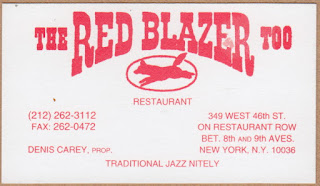 Jazz, sautéed mushrooms was all I had to say about that.

Later, I added briefly and clearly suffering from jetlag: 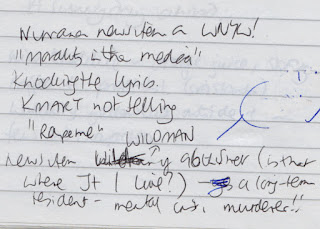 Then dozed off, but not before noticing and being bewildered by there being a phone in the loo.

Next morning, some sight-seeing. 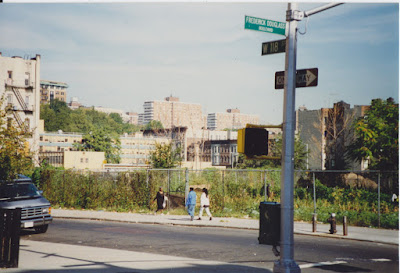 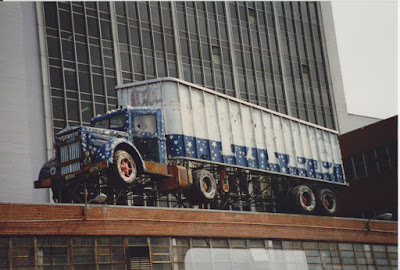 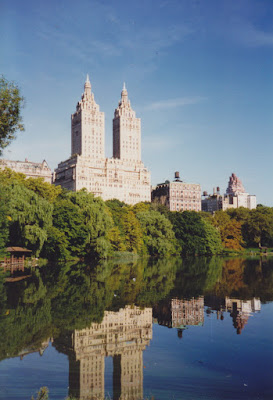 We did a bit of walking about and I quickly jotted down other things of note, as an aide memoire:

So many yellow cabs. Jewellery/watches, bartering. People seem nice – not aggressive. Good atmosphere in Chinatown. Turtles for sale.  “Have a pleasant Sunday”

(I’m not sure who said that and when, it was Saturday.)

I remember it was weird, though, seeing a policeman with a gun.

…Left there gone midnight.  Back to hotel for change of clothes.  Off to ‘China Club’, back 3.50am! Bit of a dive but pics of famous people who’ve been there on walls. Keith Richard, Rod Stewart, etc. and guitars on walls.  Mostly club/soul music. V American in feel. No hassle, no bad atmos, just people enjoying themselves. 2 Buds then cab back and off to bed.

I clearly didn't realise at the time, though, quite how cool that club was according to this feature

Beyond Hip and Unhip, There's the China Club

Back when the China Club started, Reagan was president and Adam Ant was a major musical figure. After fifteen years as one of the hottest rock clubs in history, it's as strong as ever. (Where do you think the Yankees party?) The secret? No attitude.

I suppose I was just not with the people I'd have chosen to go there with!

The following morning, I walked to Tower Records, just round the corner.  Felt I couldn’t go to New York and not buy something in a record shop and I seem to remember that in the UK in 1993, Tower Records seemed a bit of a novelty.

Not much, weird selection, ‘Rock + Soul’ together!

After that it was a boat trip. I found some photos earlier that I’d taken from the deck, shots of the Twin Towers, and it feels a little strange to look at them now.  I didn’t get as far as climbing up the Statue of Liberty, but I bought a mug in Macy’s, with a pictorial map of New York on it (I do like a good map) and some Hershey’s bars in a little deli in a side street where I suddenly felt as if I’d walked into a film set, all those plumes of steam rising from the manhole covers....  it all felt quite surreal.  Actually, the whole place felt like a film set.  What a a brilliant city to visit, though, on my first ever flight. 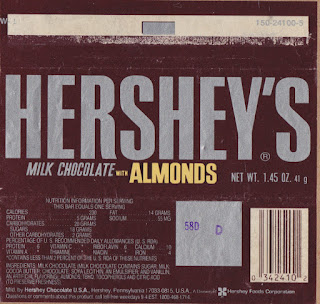 I wonder if the place has changed all that much in 25 years?  Perhaps in some ways yes, but not in others  - much like us.

The box arrived a couple of weeks ago:

I sometimes wonder what couriers make of these packages when they load them onto their vans.  I’d be curious, inclined to press an ear against the taped up cardboard in the hope of hearing something –  a clue - scratching or yawning or purring perhaps.   Checking the corners for a protruding claw or the tip of a scaly tail.   Or smells.  Seepage, even.

Inside this box was a small bag, filled with something soft.  I thought it might wriggle but it didn’t move, and it didn’t make a noise, or smell or seep.  I was very excited….

…My Tigers and European Nightcrawlers had arrived!

I didn’t know before I bought them that worms could have such exotic names.  It’s not just me, is it, for whom  ‘European Nightcrawler’  evokes images of neon cities under black skies, of mysterious women smoking long cigarettes and trains rumbling hypnotically through a dark forest landscape to the soundtrack of Bowie’s  ‘ Low’ album?

So I’m now the proud owner of wonderfully titled wild tigers (Tiger Worms, aka Brandlings and Red Wigglers!) and nightcrawlers, all 500grams of them.  Did you know worms have five hearts? They are also of course eyeless, toothless (ah, imagine a worm with teeth), hermaphrodites, who breed prolifically, and I’ve become the custodian of a small colony making their home inside a special Wormery bin.

I’m already getting disproportionately fond of them, giving them all names – there’s Mavis, and Fluffy, and Tinkerbell….   No,  it’s okay, don’t worry, I’m just sticking to Worm, it’s easier that way…  What I didn’t know before researching the whole Wormery thing, though, was that they’re quite sensitive creatures and do require some care and attention  – they need time to settle in and adjust to their new surroundings (often trying to escape on their first few nights, I eased them in by leaving a solar light on to start with) and it’s important not to overfeed them, let them get too cold or hot, etc.  So you know, I’ve been like a protective parent these last couple of weeks, checking up on them regularly, chopping their food into tiny pieces, making sure they’ve plenty of bedding to snuggle down into, bless ‘em.  They seem to be doing well so far.

And then the point of it all – they get to devour all our kitchen scraps, and turn it into top quality compost.  So basically, in return for decent food and lodgings, they pay us in shit.  Strangely, it sounds like a good deal to me.

"D'ya wanna know something really scary?" I said to Mr SDS as I went up the stairs to bed last night.

"Fucking hell, no! Why would you tell me something scary when I'm going to be trying to sleep soon?"

I think he was imagining the worst, that maybe I was going to tell him that the narrow crack in the bedroom wall had opened up and was letting in giant bloodsucking moths and rabid rats. I wasn't, it hadn't, they weren't.

It was just my slightly horrified realisation that this year it is 40 years since I went to my first ever gig.

1978.  I went with my dear schoolfriends that January, and we got photographed by the local paper before the show, posing defiantly in our home-made punk gear, me with food colouring in my hair, one of us sticking her tongue out, all of us 14 years old (and a half) and a little tipsy on cider and excitement. Siouxsie & the Banshees were fantastic - and they hadn't even been signed up by Polydor yet.

As for the three of us - well, we're still alive, and we're still well, and we're still friends, albeit now divided by a few miles, and it seems fitting that we're going to experience some very special live music again 40 years on, later this week.

D'y wanna know what we're doing?  We're off to Birmingham's heartland - on Friday, this is the day, this is the night! - and we'll head out to the venue at dusk; I know I'll be infected by enthusiasm.  It's no uncertain smile I'm wearing on my face right now.  Enough clues?!
Posted by C at 15:10 17 comments: