He was free to come and go, I didn't want him to feel trapped or unable to wander wherever his natural instincts took him.   So sometimes he slipped through the gate and took a walk down the path behind the cottages to who knows where, and I wondered if I'd ever see him again, but then I'd look out later and, ah - there he was.  He never went for long.

Strikingly pale eyes.  Satin blue black back, smoky grey head.  An adult jackdaw in the garden - nothing that unusual perhaps but, unfortunately, in spite of no signs of injured wings or legs, this one was unable to fly and he'd been quietly taking refuge here for two weeks. 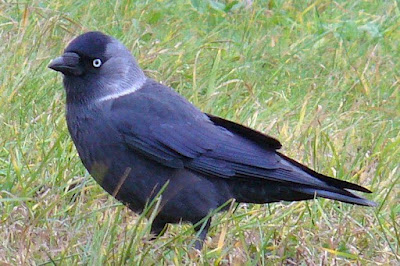 I know I shouldn't let myself become so emotionally invested but I seem to be wired that way... worrying about cats and sparrowhawks and foxes getting to him, worrying that he'd starve, so I did my best to provide food and water and not to spook him when I was outside.  There were places for him to hide and shelter, and he seemed to be doing ok given his fundamental weakness.  He was too shy, and too fast on those two legs, to attempt catching for 'rehab' purposes - besides, I didn't want either of us to go through the trauma of trying.  So my wish was that eventually he'd find the energy to stretch those shiny wings and take off to the treetops and chimney pots, and to be as free as a.... well, of course.   Just as a jackdaw should be.  In the meantime I knew he was vulnerable and prepared myself for a less happy outcome - but at least I'd know I tried my best.

All these thoughts of jackdaws had me searching for an appropriate song...  and I was pleasantly surprised to find one.  It also happens to be from an artist who has been much lauded over at Brian's place and his name is Martin Newell.

Our lovely blogging pal Brian over in Seattle is so much more familiar with Martin Newell's output than I'll ever be, so I really recommend reading up about him and having a listen to some tracks there. But I first came across the man as the vocalist with the band Gypp, a fairly local outfit who used to play various haunts in East Anglia in around '78/'79 including the one I frequented as a young teenager.  I just have a memory of a skinny, very English and rather eccentric wild-haired guy in a hat and I think probably very little has changed in the interim and, although I don't remember much about how Gypp sounded at the time, listening to some of Martin's much later songs I can hear '60s influences, shades of Robyn Hitchcock and The Dukes Of Stratosphear.   I was also interested to read about him and his later band The Cleaners From Venus (what a name) in the wonderful and highly recommended book 'Lost In Music' by Giles Smith (it's about time I read that again I think, and if you haven't, then why not?!)  Blogger won't let me insert a youtube version of the Cleaners From Venus song I have in mind here - 'Jackdaw Days' - but I found it on the Bandcamp page so here's a link:

The Cleaners From Venus: Jackdaw Days 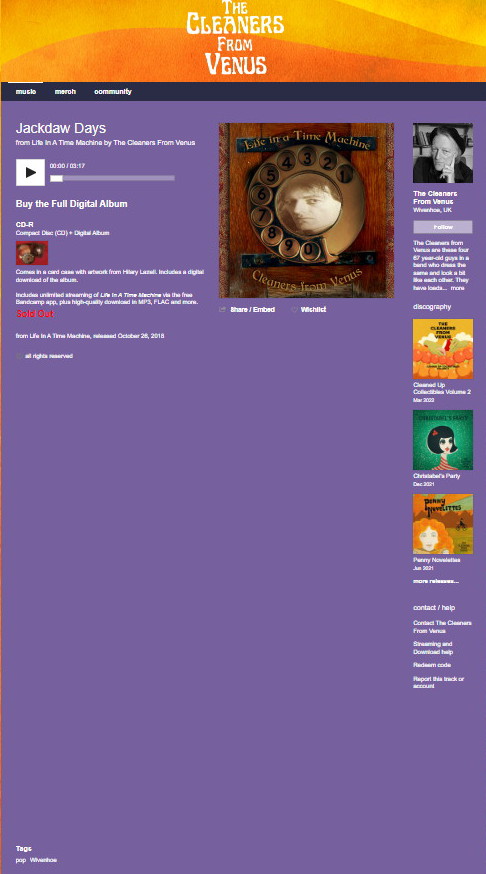 Sadly the jackdaw died this morning, but it was peacefully in the undergrowth, thankfully not savaged by a cat or sparrowhawk or fox.  His last two weeks in the garden were hopefully pretty chilled with food, water, shelter, lots of bird company and this peculiar woman looking out for him.   Inspecting him more closely as I went to put him in the ground today, I started to wonder if he simply died of old age.

I don’t know whether we look more like ageing beatnik chicks or Mafia wives, all of us dressed in black and with chic boots and dark glasses.  One friend wearing a smartly tailored coat, the other with her nails immaculately polished, me with crimson painted lips.  We make our way to an old building at the end of town - coincidentally the same place we’d convened many times long ago - in fact, over forty years back.  It was once the venue where, with wide-eyed adolescent adulation, we'd watched Siouxsie & The Banshees perform before they’d even got a record deal and where we’d seen Adam & The Antz many months prior to the release of ‘Dirk Wears White Sox’ (oh, how to make yourself feel ancient!)  Also where the Newtown Neurotics and Crass became our local heroes.  I could go on.  But it's certainly a building full of ghosts from our past, and I half expect to see a gaggle of punks around each corner and to delve into my handbag for Polos to hide the smell of forbidden cigarettes from my parents.  Ah, there are parts of me which would go back to that time in a heartbeat; I’d skip the teenage angst and the school night curfews, but…yes, the gigs!

Anyway, here we are at our old stomping ground (no longer that music venue and arts centre), three women in our late fifties, about to embark on something completely new.  That’s one of the things about getting older, isn’t it?  That there are fewer and fewer ‘first times’.  But this experience is still uncharted territory; it’s definitely the first time any of us has robbed a bank…

An hour later, as orange lights flash and alarms sound around us, we are sitting in the back of a transit van, leaving behind us a trail of gold bars, magnetic keys, bank cards and a gun.  Oops, did I say gun?  I do of course mean a grabber stick.  We’ve ordered a pizza for a security guard and laced it with laxative so that he’s waylaid in the loo.  We’ve hidden in cupboards, hacked a computer and fiddled with frustrating padlocks.  There was that moment when each of us tried to turn one of those number locks by torchlight, on the underside of a table it was, too - but the glare was too much for our glasses…that’s the problem with varifocals, I find.   I must bear that in mind should I ever want to pull off another heist.  Still, in spite of that somehow we’re not quite yet too old for this malarkey, because it’s undoubtedly one of the daftest, silliest things I’ve done in a long while and the laughter along with our bank-robbing ineptitude will remain with me for some time.

Of course no security guard was harmed in the process and the gold bullion was made of wood, but as far as those ‘first times’ go, my first ‘Escape Room’ experience was a good one...