A matter of death and life (part two - life!)

I must say there is nothing quite like the comfort of a good hotel bed.  (Where do they get their pillows?  So perfectly plump and firm!)  The kind of bed where you should be able to slip under the fresh clean duvet, fall asleep instantly and have glorious dreams for the next eight hours….   But I didn’t.  I lay awake for ages.  So many thoughts, images, feelings were jostling for attention in my brain, refusing to form an orderly queue or to go away and come back in the morning.  And this was only the first night!

Earlier that day I’d boarded a sleek, new (and very exotic sounding) Azuma train and travelled 400 miles northward.  Having not been on a train these last two years the experience felt strangely new again.  I mean, even a visit to the onboard space age circular loo seemed a glamorous excursion.   All silver and symbols and sensory controls, I half expected to see the lovely Lieutenant Uhura waiting outside when I emerged. 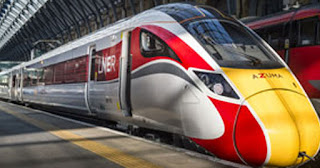 But the views from the train window were most definitely earthly and I loved the way the landscape changed from the flatlands of home to… ooh, hills!  And rocky outcrops!  Towns and cities I’ve never visited teased me with momentary flashes of their most striking assets.  The bridges spanning the Tyne…  Peterborough and Durham Cathedrals piercing the skyline…York Minster too.   Quirkier things as well, the curious ‘Mallard’ sign… 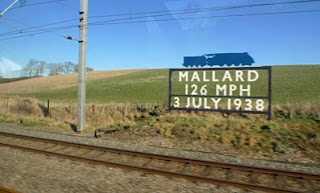 And I’m pretty sure I let out an audible gasp at my first sight of the sea which, in spite of it being named the ‘East Coast Main Line’, still somehow took me by surprise.  It was like that feeling I had as a child en route to a seaside holiday, the excitement at turning a corner and suddenly seeing what seemed like a magical ocean at the edge of the world.  I know, I’m romanticising, it was a rather chilly looking steel-grey North Sea.  But still…

Eight hours after leaving home that morning, I was disembarking at Edinburgh Waverley Station – amazingly my very first trip over the border into Scotland - to be greeted by our lovely blog pal, Alyson.   It was great to see her familiar face; we had met up just once before in London and felt then as if we’d known each other for ages.  And that’s the beautiful thing about blogging, the way strangers can connect, get a sense of understanding and camaraderie, just through what we express, and how…  but more on that later.  As if I hadn’t been excited enough by the journey, there was so much yet to come – a few more people to meet, some for the first time, others to reconnect with, places to see,  music to hear (not just the bagpipes on the Royal Mile which take busking to a whole new level), tales to be shared, drinks to be consumed – naturally - and hugs (hugs at last!)  to be had…  A long-awaited bloggers’ ‘mini-meet’ had finally, appropriately, come together in this beautiful city. No wonder I didn’t sleep very well that night... my senses were most definitely working overtime.

A matter of death and life (part one)

What a week it’s been…

The phone call from the hospital came last Sunday afternoon and we knew that a long and difficult saga was drawing to a close.  My dear old mum-in-law’s health had been deteriorating both mentally and physically for the last couple of years, so it wasn’t unexpected.  We saw her for the final time on Sunday evening, short of breath and unresponsive, but there was a peacefulness about her too and I like to think she was still somehow aware of the familiar voices and comforting touch, and perhaps they helped her to just let go.  Still, feisty to the last, she hung on for one more night and then finally went on Monday afternoon.

Well, my mum-in-law has made an appearance on this blog before and now seems a good time to remind myself of that.  I mean, she was the mother of an anarcho-punk guitarist with an occasional penchant for black nail varnish, whose girlfriend used to turn up at their home from the bus in a pink velvet jacket and leopard spot trousers… she was bound to pick up on some rock’n’roll trivia!  Proof came many years later, when she was in her 80s, and Mr SDS spotted her filling in a crossword puzzle with the letters:  M  O  T  O  R  H  E  A  D .  The clue was simply ‘Lemmy’s rock band’…

We naturally started to harbour secret suspicions that, tucked away amid the kitten ornaments and well-thumbed copies of the TV Times, there might be a copy of ‘No Sleep ‘Til Hammersmith’.  Not only that we thought but, perhaps carefully disguised within a Tom Jones album cover, there would also be an original issue of ‘Piper At The Gates Of Dawn’, after we noticed this completed puzzle page: 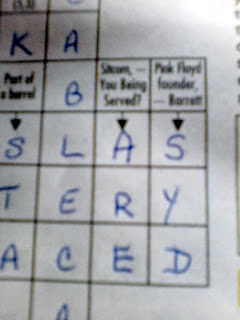 (It's not very clear but the box on the right has the clue ‘Pink Floyd founder, ____ Barrett’)

Anyway, here’s to my mum-in-law Eileen, who lived a long and happy life in the same little village where she’d spent her childhood.  She loved her crosswords and her fish’n’chips, and was so generous with the bulging bags of crisps, chocolates and biscuits that she gave us every Christmas that we probably still have a few packets of Jammy Dodgers and onion rings left in the back of the cupboard from 2006…   I fondly remember the early days of getting to know her when she’d feed us with Findus Crispy Pancakes (the cheesy ones) and the best home-made date cake I’ve ever tasted.  RIP Eileen.

Unfortunately, therefore, it wasn’t the best timing that the morning after she died I was due to be travelling 400 miles and staying away in Edinburgh until the Friday, but it was for a brief yet exciting adventure that had been 2 years in the waiting, and Mr SDS wouldn’t have wanted me to miss it.  It felt strange to leave him home alone at such a time, but at least we could communicate by phone and it was only for a few days.  And what a few days!  From thinking and talking so much about death at that moment, I was lucky enough to go off for a fantastic new experience in the loveliest of company (which you may soon, if not already, be reading about elsewhere) and it was at the opposite end of the spectrum: positively life-affirming.

More on that in part two!

In the meantime, what’s it gonna be?  Motörhead or Tom Jones?  Oh, go on, let’s have a bit of both…

Oh god, I had forgotten how good it could feel.  It’s been a while!

But last night, after a couple of years without any, the visceral and emotional pleasure of experiencing live music again felt even more special than I’d expected.  It was positively life-affirming.  And it was practically in my back garden!

Ah, what a lovely evening.  Against a clear blue sky the sun slowly descended into a horizon studded with ancient trees and an elegant church spire; on the other side of the gently sloping field the turrets of the stately home hosting the event glowed in vivid pink illumination.  It’s an absolutely beautiful setting for a tiny music festival and incredibly for me it’s only a two minute saunter from my front door (a crow could fly there in a few seconds).  I could hear the bands sound-checking through the kitchen window earlier.

But to be there, in amongst it – it’s that thing, isn’t it, of sharing the joy, the atmosphere, the whatever-it-is that live music gives you which is hard to describe – with your fellow human beings, hence my use of the term life-affirming.  With no pressure on us and a couple of tickets bought ages ago, my friend and I wandered down for our prescription of festival elixir just in time to catch the three bands we were most keen to see.  This being a very small, inexpensive event, it tends to host artists who’ve been around a while (or who’ve gone away and come back), you know the kind of thing.  But no prejudice on my part, I’ve been around a while too…

So, all power to Stereo MCs, Electric Six and Ash.  I loved them all.  And I got a strange kind of pride and sense of connection that they were playing in my home village and were so well received – it felt kinda personal.  It was perhaps especially heart-warming too that the festival could go ahead again and had quickly sold out, having been postponed for the last couple of years.  Plus there was no mention of that other thing that's apparently going on this weekend... what a delightful, hedonistic bubble.

All three bands completely delivered – Stereo MCs just made you want to dance and smile and celebrate, the sun warming your face, high on energy and life, timeless.   Electric Six were slightly, wonderfully mad, as you might expect –  especially eccentric frontman Dick Valentine with his introductions (“Song No. 1” , “Song No. 2”, etc.)   And Ash – well, I’ve loved Ash for a long time but had never seen them play – and here they were celebrating 30 years since their first rehearsal in June 1992 when they were 15 years old, and now on stage with a little entourage of young offspring at the side  – that alone is enough to make you smile isn’t it?  They were superb, tight as fuck, with a well-chosen setlist highlighting both characteristic pop melodies and those harder choppy guitars.   I have long wanted to hear Girl From Mars under the stars…   Ohh, at last.

So yeah, I had forgotten how good it could feel; what a difference it makes to your well-being to be entertained by proper talent and immersed in vibrant, live music with your fellow humans, not to take it for granted either.  I’m a little loved-up, to say the least.