Now, you know me, I’m generally quite a happy soul with a habit of looking on the bright side, but I’ve realised that I don't actually like New Year’s Eve very much.

Like most memorable anniversaries it seems to carry with it an underlying mood or association that, even when the events of that day are different every year, still automatically colours the way I view it in my mind, the way I feel it.   New Year’s Eve to me is:

Oh god, that party in December 1977.  I got stuck with a boy I didn’t fancy at all*.  I spent the entire evening trying to put him off, to no avail.  So I tried some kind of blank generation strategy. I told him that I had no name.  I told him I lived nowhere.  I thought you could get away with that sort of thing when you were fourteen and into Johnny Rotten (but it just seemed to add to my apparent allure).  When my dad came to pick me up in his car the illusion of my nameless non-existence may have been somewhat shattered, but it was worth a try.

And what about that party in 2004? The evening was dominated by the local self-styled ‘comic’, who seemed to have a talent for omnipresence - everywhere you turned he was there like a bad smell - but none for making people laugh, although this didn’t stop him from spewing out his ageing jokes and punning (badly) every five minutes.  There are a lot of five minutes in the lead up to midnight….We were ready to spew something ourselves, and not just because we’d eaten too many Pringles.

There have been one or two other uncomfortable New Year's Eve celebrations too, and if you have ever seen the film 'Don's Party', you may understand where I'm coming from.

Happy New Year to all who kindly take the time to pop over here and have a look, listen or read!  Thank you.

(And I really do hope you have a good New Year's Eve, party or no party...) 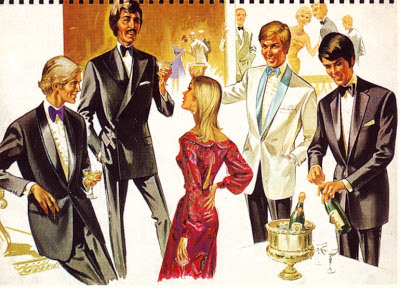 Email ThisBlogThis!Share to TwitterShare to FacebookShare to Pinterest
Labels: ain't nothing but a house party, new year's eve, the show stoppers 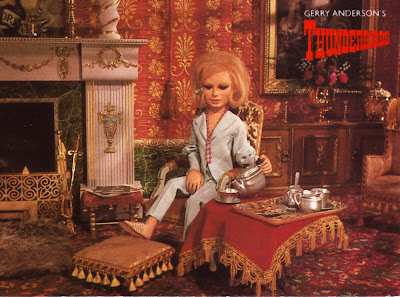 Lady Penelope in her Creighton Ward mansion
﻿
I expect loads will be written about Gerry Anderson this week and deservedly so; therefore I won't say much here.  But, as I was a child in the sixties, I just want to mention that (like many others) I have fond memories of watching 'Captain Scarlet' and 'Thunderbirds' in particular.  They appealed on so many levels - perhaps the main one, for me, was the inclusion of some wonderful female characters.  I loved Lady Penelope (although Parker scared me a little - redeemed only by the fact that he did look a bit like my Granddad) and those feisty Angel Interceptor pilots.  Spin-off merchandise may have been a little less sophisticated back then but I absolutely adored the card 'Cut Out and Dress' dolls I owned for Lady Penelope and Rhapsody Angel.  Lady P came with a picture of her wardrobe with doors that opened out, and some very classy paper trouser suits to dress her in.  Rhapsody Angel (and my sister's Harmony Angel) were accompanied by big fold-out scenery backgrounds - imaginary worlds I frequently got lost in, even though they were only one dimensional.  Rhapsody was gorgeous, wasn't she?!  But then, all the Angels were.  I read a while back that their facial features (all apart from Symphony's apparently*) were based on real people - e.g. Destiny was inspired by Ursula Andress, Rhapsody was taken from Jean Shrimpton and Melody was modelled on Eartha Kitt (that one surprised me a little!)

Then there was the music...   I know we've heard it a million times before but it still sounds good to me.

* but she looks a bit like Britt Ekland, don't you think? 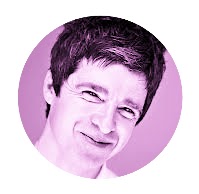 Just to say...   Many thanks for being there and for coming here; I hope you have a really good one, whatever, and however, you're doing.

Down at the Doctors...

No time to post more at the moment but the lovely folks over at the excellent music blog, Tune Doctor, recently asked if I'd contribute a little guest piece for their 'Tracks of the Year' series.   I was honoured (thank you!) - although I confess my listening choices have been rather behind the times these last twelve months.  It made me realise just how bad I've been at keeping up and how hard I am to impress these days!

Anyway, if you're interested please pop over there and have a listen.  Any thoughts you may have of me snarling along to the Pistols this year may be dashed, though...

ThE ghoSt of chRiStMaS pAst

It was Christmas 1977 - I was fourteen and there was only one thing I really wanted for my present that year (apart from being asked out by a gorgeous boy): Never Mind The Bollocks...  And, sweetly, my parents bought it for me – well, I think they probably persuaded my twenty-year-old sister to go into the little local record shop, Startime, to actually get it, but it makes me smile to think of my mum looking at it later while she wrapped it up in sparkly snowman paper.

I loved that album and it had seemed a long wait since its release that October so I was incredibly excited to have it at last.  I listened to it on Christmas morning as I lounged about in my pyjamas playing with the cats and poring over a Cadbury’s Selection Box. And then I put it on again on Boxing Day, when the cousins were over, but after a soporfic lunch and everybody was too drowsy and tipsy to notice the lyrics to ‘Bodies’.  Or if they did, they never said anything…

No, this is nothing to do with the echidnas in my last post!  Instead here’s what we affectionately call Mr Spiky, a sculpture (?) that hangs on the living room wall. 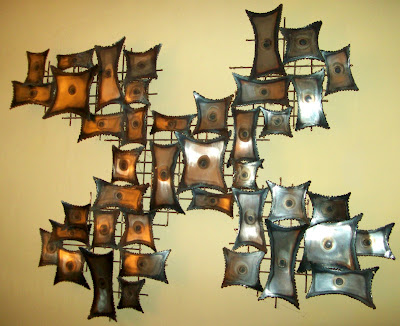 It’s about three feet wide by two and half feet high and is made of 41 thin metal pieces that look as if they're floating (but are attached to a supporting framework).  I have absolutely no idea whose creation it is.  I know my mum bought it at least twenty years ago but I can’t remember exactly when, that it represents sails (shimmering on a sea in the sunlight I presume) and that she was very excited about getting it.  When she died I kept a few bits and pieces of artistic interest from her house; this was one.  I packed some boxes of pottery and books and the 1970s bamboo lobster pot stool into the back of my little Peugeot 106, and laid Mr Spiky on top of them to take home.  Each of those 41 metal quadrangles is so sharp-edged I had visions of doing an emergency stop and it coming flying at my neck from the back seat, resulting in some gory Jayne Mansfield-style decapitation. 'Woman Killed By Dead Mother's Sculpture', the headline in the local paper would read.  With this lethal weapon behind me I don’t think I’ve ever driven so cautiously, nor been quite so prepared to actually run over a hapless rabbit should it have crossed my path, rather than have to brake suddenly. 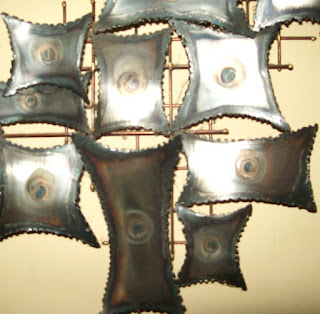 Mr Spiky still causes injuries now and then - it’s hard to keep free from dust and cobwebs without getting scratched in the process (me, I mean) - but generally it remains untouched.  I’m so used to it now that I don’t really see it, and forget that it’s there, with a pile of CDs and a guitar below it, just part of the furniture.

We’ve talked about getting rid of it, to make room for shelves or a bookcase or something more functional, but I’ve still got a soft spot for this piece of metallic art.  I like the way the light catches the ‘sails’ differently at various times of day, and I like the fact that somebody took great care over it - albeit in a rugged, metalworking kinda way, and made something quite beautiful from a basic element.  I wish I knew who that person was, though, and I don’t know how to find out.

Just please don't say it looks like a swastika!

I’ve been taking some virtual trips to Australia this week to research animals for a potential book job and in so doing I’ve fallen in love with the echidna.

Sixteen years ago I took a real trip down under but I never got to see one of these spiny little sweethearts in the flesh.  I wish I had.  From looking at photos of them they seem such characterful creatures, and I’m having fun trying to draw their ridiculously long snouts and their somewhat comical little faces.

What is it about Australian animals, though? – they’re just so weird.  Echidnas are mammals, but they lay eggs, with leathery shells like lizards’ eggs.  They carry these in a pouch.   The mother echidna then oozes milk from her belly – she doesn’t have teats – and the newly hatched baby sucks this from her skin.  The baby echidna is endearingly called a ‘puggle’ – which sounds  like something out of a children’s TV programme by Oliver Postgate to me (yes I know, I’m probably thinking of the Pogles…)  Or maybe there’s a band name there? Yay! - the Puggles are playing Glastonbury!  Then again, maybe not.

So… I’m now sketching echidnas and have the difficult task of trying to show one cuddling a baby kangaroo; my imagination is really being put to work.  But, I hope I get the job.

Anyway here are some echidnas.  In doing my research I also came across a youtube video featuring them, titled, ‘The World’s Most Terrifying Penises’.  I’ve yet to watch it….and decided not to post it here although I admit it was tempting.  Instead let’s have some Australian music… I bought a tape of the Someloves’ album* when I was in Sydney and they still sound like perfect Antipodean pop to me.

* Thanks to a friend who'd introduced me to them a few years beforehand...