Something dawned on me recently; it’s probably blindingly obvious to most people but for some reason it hadn’t been to me until that moment.   I was taking a short cut through the churchyard and casually observing the gravestones standing there, like a small crowd of quiet, still people, when it suddenly struck me that that's exactly what they are.

A small crowd of quiet, still people:  neighbours, friends, strangers;  old, young and in-between; shopkeepers and factory workers; families grouped together  - like a gathering at a village fête.    Although I’m not religious, the significance of headstones suddenly registered in a whole new way, and I found it kind of comforting.  I saw the graveyard in a different light, like a place full of life rather than death. 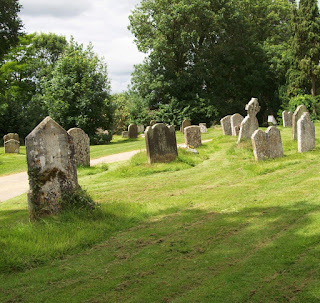 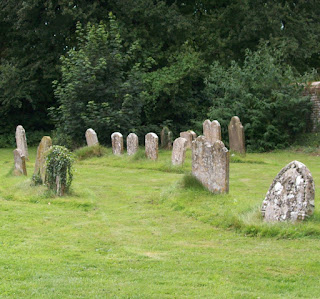 Then last month I was down at the City of London Cemetery again and the analogy really hit home.  It’s huge.  The 'population' of headstones is more like a large town than a gathering at a village fête - there are 150,000 graves there.

It’s the biggest of its kind in the UK – set in 200 acres of grounds (I can never picture quite what an acre actually is, but someone told me it’s roughly the size of a football pitch).  It also has 7 miles of roadway intersecting its vast parks and gardens, and 5 chapels.  You might imagine there are quite a few notable characters buried there but a little research didn’t produce many names – although I did find two of Jack the Ripper’s victims and Bobby Moore’s ashes.  The enormous variety of the memorials – the humble, weathered stones alongside some contrastingly new and really quite blingy structures, the assortment  of different traits, cultures, tastes and religions of the people beneath expressed in their monuments – well, they looked just the same to me as the shoppers I’d walked amid earlier on an East London street and the passengers on the platform at Liverpool St. Station.  I suppose it’s obvious when I put it like that.  Anyway, there’s definitely something about this correlation that I find uplifting: the inanimate representations of all those diverse human beings now mingling so peacefully in the cemetery.  If only we could always be so peaceful in life.

I had to take a taxi to the station on the way to help clear my aunt and uncle’s house (both now buried in the above mentioned City of London Cemetery, in a serene, woodland area, unmarked by memorials but represented fittingly by the wildness of nature) and was chatting to the cab driver about the task ahead.  He’d had to do the same thing himself with an aunt’s belongings not long beforehand.  “She’d never married nor lived with anyone and had no other family,” he explained, “but she kept a lot of stuff!”

It’s strange when you sift through someone’s most personal and intimate possessions, isn’t it?  In some ways you can feel like a voyeur, an imposter.  So Cab Driver and I talked about that, and how a lot is changing now, as so much of what we'll leave behind in the future – photos, music collections, documents, even contact details for friends - may only be accessible via our hard drives and phones… passwords permitting.  There's something to bear in mind!  Anyway, up in the attic amid his aunt’s general paraphernalia, he'd found an old suitcase.  It was closed tight, and for extra security bound crossways with thick string like a parcel.  Attached to it was a hand-written note:

‘Please destroy after my death.  Not to be opened’

“Ooh!  I wonder what was in it… did you ever find out?” I asked.  But Cab Driver was an honourable  man and had followed his aunt's instructions without even taking a sneaky peek.

So, what could have been in there?  Secret letters from a forbidden lover, perhaps?  That was my first and favourite thought.  Or perhaps documents relating to an illegitimate child?  Or even evidence from an unsolved crime?  Or maybe just a private collection of….. well…  what?!

I'm tempted to do the same myself, just to bring some old-fashioned mystique to the proceedings when the time comes.
Posted by C at 21:15 6 comments: