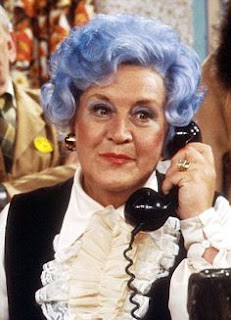 A friend of mine went to her school reunion recently.  “You know it was so funny to see that all the men with hair there had gone grey,” she said, “...but none of the women had!”

They say that grey hair adds six years to a woman’s age. Gee, thanks for that, just what we need for our confidence when we're already going through you know what.

Of course that's perpetuated when so many use artificial hair colour.  Imagine if everyone who covers up their grey hair stopped doing so, then this ‘six years older’ thing would be meaningless.  It’d be no big deal as, by the time we reach our mid-fifties, most people have gone at least 50% grey anyway.

However, as every modern woman knows, it’s against the rules to show your age.

For example, you rarely see a middle-aged female TV presenter with grey/white hair, compared to their many male counterparts for whom it doesn't seem to be a problem.  (Gets me all feminist, this...)  The pressure on women in the media to stay looking younger is colossal and, ridiculously, it seems their jobs can depend on it  - but that's a whole topic for another time and place.

Although, seeing as I've brought it up... 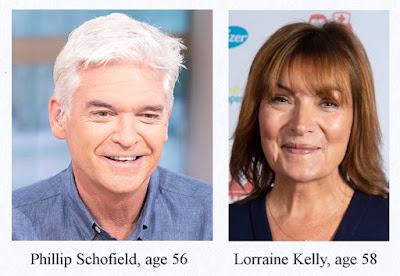 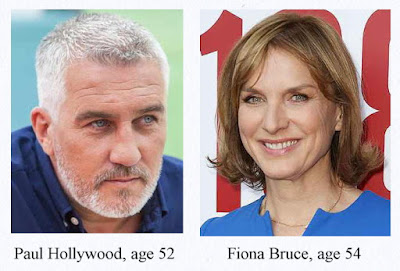 See what I mean?

Anyway, in the meantime, I'm taking a stand.

White hair is nothing new to me; since late childhood I’ve had one small patch of it – a ‘Mallen Streak'.* 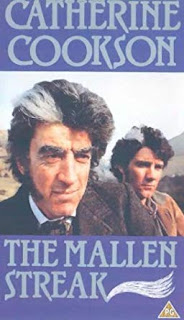 The 'Mallen' Streak, as later sported by Dave Vanian 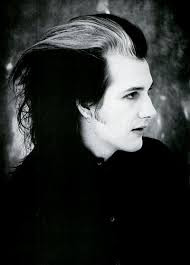 and more naturally by the Millibands 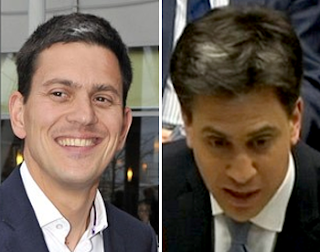 It's not that much but I hated it.  I remember the time a couple of mean girls at school shouted, “Ugh! You’re going grey!”  and, as a sensitive 13-year old, this felt mortifying. So bleaching the whole of my hair and adding unrealistic colours through the punk/post-punk era conveniently disguised it as well and I loved what I could do with all those nasty smelling chemicals.  It's ages since I've used peroxide or Crazy Colour  – but still I've spent years tinting that stubborn white stripe (I should call it Jack) to blend in with the rest.

This year the long, sunny Summer bleached my dishwater blonde and the freaky white bit didn’t show up as much so I left it.  But now, as my Winter coat grows, it's more obvious, and suddenly so are plenty of other new white hairs joining it.  I'm going grey.  Just as you'd expect at my age.

So I could reach for some Nice'n'Easy now and be ruled by an endless regime of dyeing and touching up roots.  Or I could just think, you know what, fuck it.   Doesn’t mean I've given up caring about appearance - just that I’m still me, whatever.  If it's against the rules to show your age, what are rules for if not to be challenged and rebelled against?  Why should visible signs of maturity be so negative for women?  (I think men still look great with grey hair... or no hair... and all stages between!)

I may cave in, especially if I get talked down to like a little old lady, whereupon I'll be tempted to do all manner of unspeakable things with the pointy end of an umbrella, and then reach for the bottle (of 103A Medium Blonde).

For now, though, I'm finding it oddly liberating and have decided, in defiance of both sexism and ageism, to embrace it.  So there! 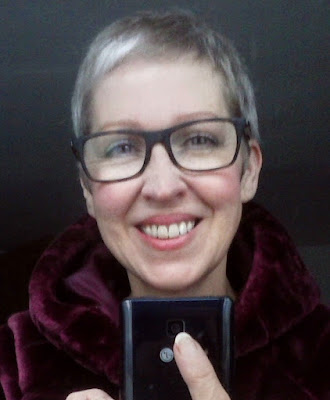 * Apparently it's 'Poliosis', a genetic condition where there is an absence of melanin in head hair, eyebrows or eyelashes.
Posted by C at 09:56 29 comments:

"Keep that one; mark it fab" 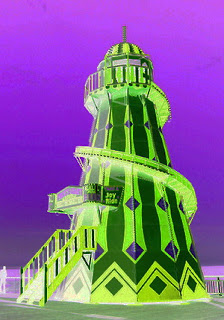 You like your music edgy, raucous, fast and pounding, verging on the anarchic?  With crashing percussion, some reverb, overloaded and slightly off-key guitars?  A freshness and rawness to it with a screaming vocal that stretches almost to ripping point at times, the music’s driving, chaotic energy taking you with it before ending in the glorious sound of feedback?

You know the official version of ‘Helter Skelter’ from the White album; it’s already considered a bit wild - the Beatles’ ‘heavy metal’ moment - but if you like it even wilder (as I do) please take three and a half minutes to listen to this previously unreleased session rendition, which is more visceral than ever and about as punk/grunge as a 50-year old recording gets.

But is it art? VI


The sunlight was so bright yesterday morning that I had to pull the blind down to be able to work.  But I was unexpectedly distracted and mesmerised by the scene it created - the flying and flitting silhouettes of sparrows (there's a birdfeeder on the other side of the window.)  It's often the simplest things that I find the most charming  - couldn't resist a clumsy attempt to capture their movements in a video.

Email ThisBlogThis!Share to TwitterShare to FacebookShare to Pinterest
Labels: birds, but is it art, nature

I took myself off to a very rainy London the other week to meet a friend at the British Library, where we wandered around an eerily lit gallery to view some beautiful art, literature and treasures from 1300 years ago.

There in the semi-darkness I half expected to bump into Lance and Andy from ‘Detectorists’, for there was indeed Anglo-Saxon gold on display... 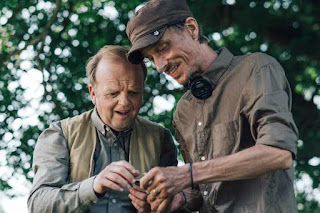 Exquisitely shiny, tiny coins, brooches and intricate heavy-looking belt buckles almost glowed from behind their glass cases.  The exhibition was well-attended – with white hair and glasses the look of the day - but no-one spoke, or if they did it seemed only in hushed, reverential tones.   It felt terribly straight and subdued in there, but I was excited by what I saw to a degree I hadn’t expected, and found myself having to stifle little gasps of inappropriate enthusiasm.

What always gets me about the sort of artifacts on show here is when I can make that human connection.  When I think about the real person who wore that buckle and the fingers that looped the belt through its clasp – that kind of thing.  And, as an illustrator, I wanted to see the marks of the artist’s hand on the manuscripts, the strokes of ink and the characterful features, and imagine the creator’s mind at work,  just like mine.  I was more than rewarded by what I saw – astounded at the brightness of the inks in particular – I had no idea that the vivid oranges and greens so frequently used in the illuminations would shout out so much, not unlike the shades and strength of the felt tip pens I used as a kid.  Almost garish.  I’m convinced too that people had better eyesight 1000 years ago than we do now, and nimbler fingers too, for the minute scale of the details in the decorations was quite mind-blowing.

In the dumbed-down world we live in I’d come to hate the way labels on products often refer to them in the first person.  I’m usually irked by a pack of carrots and its patronizing instruction to “keep me in the fridge!”, etc.  But after this exhibition I realised this is nothing new and it’s softened my attitude. The anthropomorphism of inanimate objects was very evident in Anglo-Saxon times – the books that introduced themselves:  “(Name) wrote me”, and the brooch which threatens any thief with an inscription: “May the Lord curse him who takes me from (owner)”, etc.  Books of riddles too, a huge literary genre 1000 years ago - more proof that really we’re still the same people at our core, and that’s what I want to believe.

Even an early version of a word search, with a palindrome... 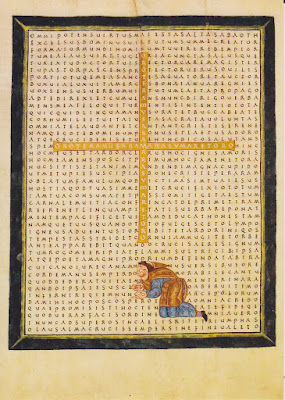 I love the figure at the base.  (British Library postcard)

Plus, I love books.  I love the physicality of books, the feel and look of them as objects, their construction and their role.  Huge books of manuscripts with metalwork bindings reflected their importance and I was amazed by the sheer outrageous size of a giant bible (the ‘Codex Amiatinus’), measuring 2ft long by 1ft wide and an incredible 1ft thick, weighing in at 75lb (over 5 stone for those like me who still think in Imperial).

With my desire to relate to the illustrators involved in particular, I was really gratified to see a lovely 11th Century book called ‘Marvels of The East’.  Written in Old English, it’s like a mythological travel guide, describing the weird and wonderful creatures that can be found in some faraway Eastern place, such as the “men who are born fifteen feet tall and ten feet broad.  They have big heads and ears like fans”.  I'm thinking Martin Clunes.  Nooo!

Or how about this: 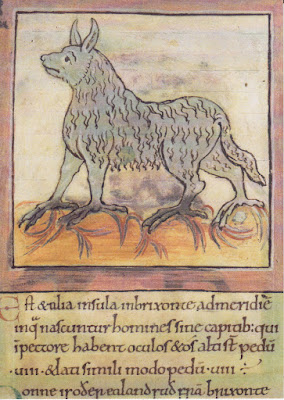 "Lertices, a small creature with donkey’s ears, sheep’s wool and the feet of a bird."
(British Library postcard) 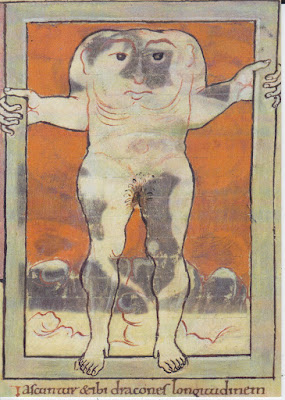 "The Blemmya, a man 8 feet tall and 8 feet wide with his head in his chest."
(British Library postcard)

I lingered long over this image, studying those fingers wrapped around the frame in an imaginative graphic touch, the benign expression on that face and that lovely inky outline and, never mind those hundreds of years that have passed, at that moment I’m inside the artist’s head.  What a great commission that must have been!