Unaccustomed as I am...

I don’t know why I did, but I said “Yes”.  In fact I said “Yes, that’s fine, no problem, I look forward to it”.  That was six months ago and it didn’t seem like a problem then, it was fine and it was a long long way ahead to look forward to.  But now there’s only a month to go and I’m wondering why I agreed….to give a public talk.  An hour-long one at that!  I know this is no big deal to a lot of people; giving speeches, lectures or presentations is just part of daily work.  But it is a big deal to me.  Over the last ten years, working freelance from home and burying my nose in paper and paints most of the day, talking usually involves no more than two people at a time.  And that’s just me and my husband.  No shyness, no inhibitions, no requirement to please...  Oh, and no payment either.   Now I’ve agreed to talk to a group of people I don’t know and of an unspecified quantity – although I’m told it could be near the hundred mark – and I have a small remuneration to justify.  The pressure is on.
The first time I stood in front of a really large group of people and opened my mouth to speak was when I was seven.  My best friend at school had persuaded me to join her in reading something for morning assembly.  The butterflies appeared in my stomach from the moment I awoke that day, and throughout breakfast and the short walk to school they turned into monstrous pterodactyls on speed, crashing against my rib cage from the inside.  By the time Ruth and I stepped into the hall, with its freshly polished parqué flooring and the smell of its junior gym equipment suddenly becoming more nauseating than ever before, I was a quivering mess of blushing self-consciousness.  In front of us was the school’s entire population of teachers and pupils:  around 8 grown-up, big people and nearly 200 fidgety, farting, nose-picking little people.   It came to my crucial moment  – I opened my mouth – something came out – but not the words on the page in front of me.  It was some stumbling, stilted, stuttering version of what it was supposed to be.  Finally, in what seemed like a lifetime later, it was over.  I turned to Ruth, mortified.  “It was my teeth” I said, “there’s something wrong with my teeth.”   Of course there was nothing wrong with my juvenile molars. The sad truth is that, at the tender age of seven, I already realised that it was too embarrassing to even admit to being embarrassed.
Well that was long ago and I’m a little more confident now - Ruth would be proud - but nevertheless it feels like a daunting task.  I’ll be talking about my work and experiences to a group of fellow artists/enthusiasts so I know it’s  a safe subject and a relatively non-hostile environment.  With several props and quite a few ideas floating around my head, I need to put it all together and come up with something that will keep the audience interested – lots of planning and practice runs might help.  Strangely, in spite of my nerves and fears I can’t help feeling quite enthused at the challenge; as a kind friend said, I’ll probably feel exhilarated too once it’s done.  Right now, though, it’s still a big deal and I know I’ll be embarrassed.  I can admit that now.  I'm filled with dread.  I’d better book myself in at the dentists before the big day.
How NOT to trip over your words....
Posted by C at 11:50 12 comments:

It was during midwinter a couple of years ago that I had the ‘bizarre bluetit experience’.  If you’re into birds – I don’t mean in a twitching, tracking-down-the-elusive-red-throated-marshmallow-hawk-warbler type of way – but just into enjoying your regular avian visitors, you’ll hopefully understand why it was special.
Anyone who feeds their garden birds will probably know how you can get quite used to having one or two ‘tame’ ones; blackbirds and robins seem to be the most receptive.  It just takes a combination of time, trust-building and food to get the occasional brave feathered character to come to your door or window and wait for edible treats, or even to take them from your hand.  I’ve got to know several blackbirds over the years who develop certain habits that ensure they’ll get some juicy sultanas: one used to jump on the back-door handle and perch there, tapping on the window glass.  I became well-acquainted with a robin who followed me around the garden and became trusting enough to land on my fingers and take a snack from my open palm.  You can almost see them calculating the odds – weighing up hunger versus danger and deciding that some degree of human interaction is a safe enough bet.  They let you get close – but only on their terms.
The weird thing about the bluetit who appeared one winter’s day was that there was no time, no trust-building nor enticement of food involved.  I first spotted this individual from my window and noticed that when other birds flew away this one didn’t.  This often happens when a bird is a bit poorly and its usual defensive reflexes are not kicking in.  So it immediately caught my attention as I watched its behaviour during the day.  Next morning I saw it again and, curious as to what it would do in response, I went outside – the other birds flew off, but bluetit stayed where it was.  I don’t know why I did it, but I’m a bit soppy like this, and I remained still, about eight feet away, and called over to it.  Yes, I know, soppy. I think I probably said “hello sweetie” in the kind of voice you use for cats and babies….  And the bluetit looked up, uttered a little call, then flew in a direct line towards me and landed on my arm.
I couldn’t believe it.  This tiny bird then hopped along my sleeve and onto my shoulder and sat there right next to my face.  I could actually smell it – a slightly musty aroma – and as I turned my head towards it I could feel the faintest touch of its feathers near my chin.  It seemed to want to snuggle in to me.  I was delighted – but really quite shocked, and absolutely baffled.
Once I’d got over the surprise (and desperately wishing my husband was around so he could take a photo) I was able to manoevre the bird by letting it perch on my fingers.  It seemed perfectly happy to stay with me but also wanted to climb up my back which was getting a bit awkward.  I took it to a branch and encouraged it to move onto it so I could go back indoors.
For the next few days bluetit and I got to know eachother.  I would notice it in the morning, go outside, attract its attention with a “hello sweetie” and have it fly to me from wherever it was to simply sit on my shoulder, often trying to nestle into my jumper or push up close to my face.  It didn’t even take any food on offer – it was as if it just wanted to be with me. I don’t know why it was so immediately tame and unafraid, but I can only guess that it may have been fostered by someone and had become ‘imprinted’ – when a wild bird or animal thinks of a human as its parent, or own kind.  This means the creature is rarely able to survive in the wild, as it doesn’t relate to the usual behaviour of its own species and is unlikely to know how to search efficiently for food.  Even then, this bird would have hatched in the Spring, so had it been kept in captivity all those months in between and then set free in the winter?  It does seem strange.
Sadly, though, I can only think that must have been the case.  After several days of being totally enraptured by this delicate, almost weightless bird’s trusting, willing and very close company, I was walking back from the village and got caught in the snow.  It came down thick and hard and settled.  I feared for my tiny friend’s ability to protect itself and stay warm and well-fed in the harsh conditions.  I didn’t see it for the rest of that day.  Next morning the snow was even deeper and the heavy white of the sky suggested there was more to come.  Other birds swooped down and fed frantically from the seed-feeder, knowing they were in for a hard, cold spell.  I kept calling for it.  “Hello sweetie..?”
But  I never saw that little sweetie again.
Posted by C at 17:58 9 comments:

A soul thing for a Sunday morning III

Email ThisBlogThis!Share to TwitterShare to FacebookShare to Pinterest
Labels: a soul thing for a sunday morning, big bird, eddie floyd

I just learned that the great illustrator Ronald Searle died a few days ago.
The very first time I saw his illustrations was when I was about ten and had been given a second-hand copy of ‘The Terror Of St Trinian’s’. 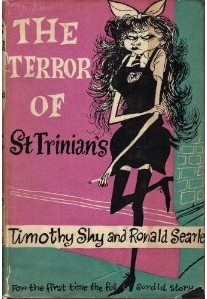 I was so captivated by his lively, scratchy pen and ink drawings.  What was particularly special was the way he imbued each character with so much personality that I really felt I had met each and every one of them.  There was such power in every tiny detail.  No other book had ever had quite the same effect before - in fact I’m not sure any other illustrator has ever had quite that same effect since.   Later, when I went to secondary school (my own version of St Trinian’s), I could have sworn that some of my teachers – and fellow pupils - had walked straight out of the pages of that book.
Much has been written about Searle’s long and productive life elsewhere (and there is so much more to his work than just children’s book illustration) so I won’t cover it here. However I am at least quite chuffed that I studied illustration at the same establishment as he did, at what is now known  as Anglia Ruskin University in Cambridge.  They’re very proud of their connection with him there.
Hearing of his death also prompted me to rummage through some of my old books and dig out my tatty paperback of the two stories: ‘The 13 Clocks’ and ‘The Wonderful O’ by James Thurber, which contains some classic Searle illustrations.  Here are just a few for your viewing delight. 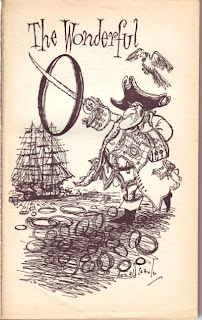 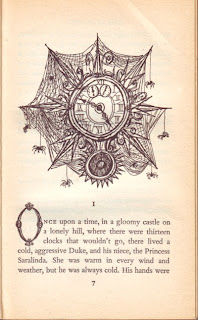 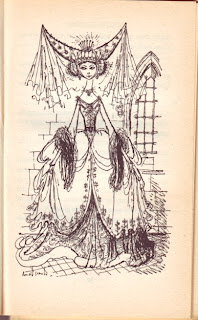 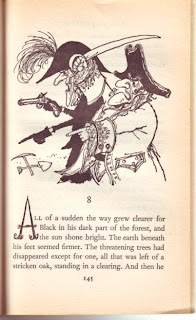 And for anyone who remembers the Molesworth books, here is a lovely little animation that someone has put together, which perfectly showcases Searle’s fantastic character portrayals.
Ronald Searle
3rd March 1920 – 30th December 2011
Posted by C at 16:39 7 comments: