Breasts!  Now I have your attention, I'm going to write about… well, yes...breasts!  Indeed, those delightful squidgy orbs possessed by a significant proportion of the population; what lovely things they are.

I’m on the subject because the other day I nearly found myself lying unconscious in a crumpled heap on the floor and, erm, naked from the waist up – apart, that is, from a facemask and a pair of earrings - with a woman I’d never met before, all because of breasts.  Not that I'm trying to be deliberately titillating (or maybe I am, just a bit; life can be rather dull at times…)

Ah, those soft, sweet mounds!  They embarrass the hell out of us when they start to appear, arriving at a time when we’d probably really rather be without them.  Then there’s the dreaded first bra conversation, followed by a host of other potential humiliations until, hopefully, we learn to love and cherish them whatever their natural size, shape, or wobbliness quotient.

Assuming all is well (which I hope it is for anyone reading this) - they accompany us through various stages of life and then we hit a certain age when along comes the first routine mammogram.  I know medical procedures and the reasons behind them are not subjects to be taken lightly, but hope you'll let me off for expressing some stuff...

I mean, breasts are quite delicate really, aren't they? - and yet having a mammogram requires them being slowly squeezed (but not in a nice, warm, comfy way) and then squeezed some more, and then squeezed some more, into what feels like the impossibly tight aperture between two flat, unyielding plates.   Aargh!  If you're never likely to have one, please do have a little wince.   It’s like putting them in a vice.

So last week I braced myself for my third routine breast scan and thought I knew what to expect.  It’s an odd experience anyway, standing there topless with a kindly nurse trying to manipulate your torso into exactly the right position which is not one that comes naturally at all.  Hold your left arm up here, bend forward a little, place the side of your face against the glass, step back slightly, now step to the right, keep your waist front-facing, drop your shoulders down – it sounds like some kind of soft porn photoshoot.  At last you’re in the required pose (which is most awkward) and she’s able to place the relevant bit of you onto the platen and skip away to operate the machinery.  The squeeze begins - suddenly  I have visions of a car going into a crusher (sorry) - it is a little painful but nothing I can’t handle. 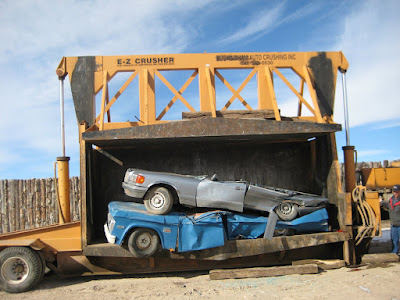 This time, though, I was warned that the compression would be a bit stronger in order to reduce the amount of radiation you’re exposed to.  I’m grateful for the second part of that phrase, if not the first.  And I don’t know what happened but, just as we’d got the right one out of the way and I was being positioned in the machine ready for the left one, I started to feel strangely whoozy.

Whoozy, dizzy, weak, giddy… suddenly I thought I was about to pass out…

Oh god, what a stupid, inconvenient, ridiculous time to faint.

Just as I believed I really was about to lose consciousness, thankfully my brain engaged enough to operate my mouth and tell the nurse.  She quickly rescued me and sat me down with my head between my knees until the room stopped spinning.  I was so embarrassed.  Indeed, I realised I was far, far more embarrassed about my peculiar attack of the vapours than at my state of undress.

Anyway, thanks to all the good people at our invaluable NHS, we get access to the incredibly sophisticated technology that scans and checks our body parts at no cost to us and I'm so grateful for that.  It's absolutely worth the relatively brief discomfort I describe above, I know - please don't be put off.  The nurse suggested that it was quite common to come over a bit faint, not just through anxiety at the procedure itself and all the connected worries, but that wearing a face mask during it can affect the way you feel and, perhaps most significantly, how you breathe too.  I feel sure that explains it.  So, next time I can only hope that, as I take off my top, my mouth and nose will also be as free as my wobbly bits.  If they could eventually come up with a nice, warm, comfy scanning machine as well one day, that would be even better.

Walk with me (to the caravan park from hell)

Not far from me, if you go up to where the witchfinders once roamed, where jackdaws chuckle from the treetops and devil's coach-horse beetles scuttle across your path, cursing you with their scorpionesque tails, this is where you'll find...

... the caravan park from hell!

Oh, what horrors lie in wait behind those mildewed panels? 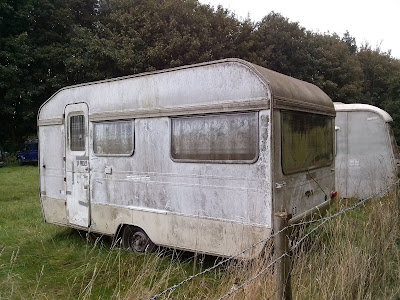 A broken door, a broken window... there's something sinister about the way that curtain hangs half in, half out, as if trapped whilst trying to make its desperate escape... 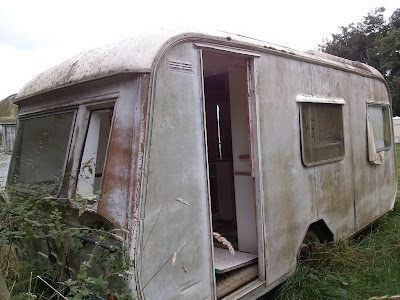 ...as barbed wire spikes and stinging nettles conspire outside 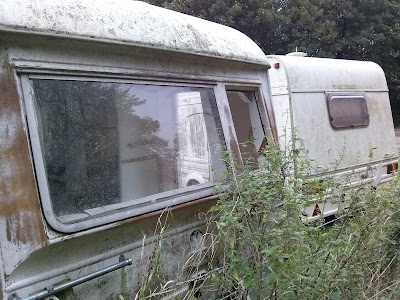 Wait - is that a shadow I see moving behind the grubby nets? 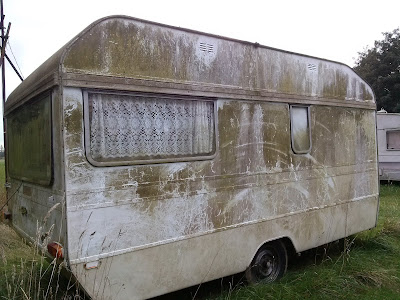 (But I do love the way the patterns in the mould seem to perfectly mimic the intricacy of the lace...) 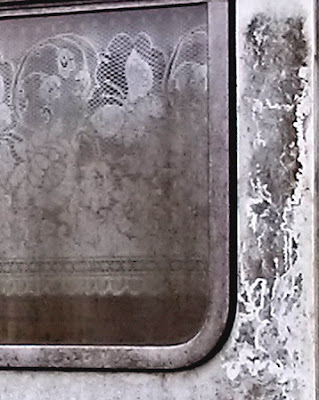 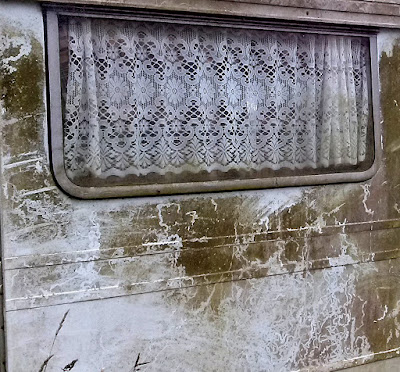 I'm glad to say there really is an innocent explanation for these creepy caravans - but why spoil a dark flight of fancy?!

I’m standing in the drawing room of a grand 17th century mansion, where the glassy eyes set in porcelain-white skin of the many portrait subjects seem to gaze over my head from every wall.  Henry VIII is tucked up there in the corner, an 18th century general takes up more space by the window.  A slim young man with fabulous long wavy locks reminiscent of Charles II is in front of me – and if it were not for his facemask and an English Heritage lanyard I could have believed he’d stepped straight out of one of those paintings.  But no, he’s very real, and also extremely engaging, recounting the history of this 100-room country pile and its occupants with such meaning, enthusiasm and a charming dash of dry humour that I’m captivated - if only he’d been my History teacher at school! (He also looks as if he should be in a band, which is rather appealing...)

Is it a "thing", I wonder, that history becomes more intriguing as we get older?  It's a subject which failed to engage me in my youth, yet now I find myself increasingly fascinated.  And that never happened in the school lessons delivered by Miss Jones!  She was quiet and timid – inoffensive enough but without any spark.  In soft monotone she’d read out long paragraphs for us to write in our exercise books, about Parliamentary Acts and… and… and what?   Proof of my lack of attention is that I honestly can’t remember.  Where was the human interest angle?  I’m sure my adolescent ears would have pricked up if only she’d thrown in a few gory executions, egregious betrayals and definitely a dose of syphilis or two.

So at school I responded to the tedium of writing out these passages, parrot-fashion, by trying out different ink tints in my fountain pen (remember Quink?) 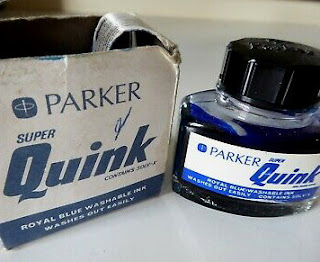 There was black, blue and blue-black, and my favourite was a fancy turquoise.  Ooh, the satisfying thrill of filling a real pen, squeezing the sides of the squidgy ink barrel, watching it suck up the kingfisher-coloured liquid.  Then I experimented with different handwriting styles - a lean to the right, a lean to the left.  Curly loops on my f’s, g’s and j’s one day, vertical mouse-tails the next.  Scratchy italics versus smooth cursives.  My History exercise book became a gallery of calligraphy and colour, and each lesson a place to drift into daydreams as Miss Jones droned on about whatever she droned on about - it’s just a shame I don’t remember a thing about the actual words with which I decorated the pages.

I did shockingly badly in my Fourth Year History exam but it probably looked pretty...

Anyway, later on at the grand mansion last Monday, there were Capability Brown gardens to enjoy, a Victorian nursery and dolls house, one of the country's first 18th century flushing toilets to peer into (I said peer...) a painting of George II which led to a conversation about Elvis (seems they died in similar circumstances), huge glass cabinets of stuffed birds and mammals which sort of horrified and enthralled in equal measure, and a café which served wine and gin (yes, of course I did) - but best of all was the much appreciated companionship of two long-standing pals whom I’ve known since school, since Miss Jones' dictation and turquoise Quink.  God, I needed to get out, I've really been missing seeing my mates and in this instance it certainly is a lengthy friendship - we go back to 1974.  There’s a lot of history there too.