Did you see butterflies?

So excited to get the new Jane Weaver album 'Modern Kosmology' last week - I'm indebted to a couple of fellow bloggers for pointing me in her direction (so a BIG thank you, I think you know who you are!)

It's great (sorry for such an unimaginative adjective) - one of those that just gets better the more you hear it, the more you tune into the detail, the mood, the femininity.

Whilst I'm not a music blogger as such, I don't have a lot to say on other subjects right now, so will just keep to the song and keep it brief today.  'Did You See Butterflies?' is the new single; it's gorgeous (shades of Lush and Stereolab, as mentioned by others before) and I know that because I'm in love with it, I just want you to be as well!  Funny how music has that effect, but it's a good thing.

I did see a butterfly yesterday too.... not many around here just yet.

Email ThisBlogThis!Share to TwitterShare to FacebookShare to Pinterest
Labels: did you see butterflies, jane weaver

Long-time friends of this blog will know that I lost a very dear friend, who also happened to be a close neighbour, last year.

Whilst personal memories live on in our own minds, when someone is as creative and special as he was, it's really meaningful for those who knew them to see their talents continue to be celebrated and shared in their absence with a wider audience

So I just wanted to spread the word, as I'm aware many of you may already know his sleeve artwork from your own record collections, that there is a lovely feature about him/interview with brother Matt in the new edition of Classic Pop (issue 29) - available from all good newsagents from today. 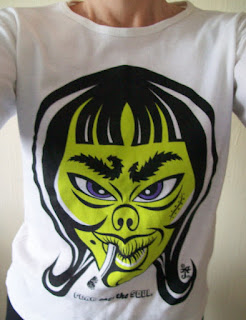 As I'm drifting off to sleep Monday night, Mr SDS joins me having stayed up a little later, and tells me the breaking news he’s just read online.  Details are still sketchy, but it’s bad.

Oh no.  Your heart sinks, just sinks.  The world is a flawed, fractured place, full of twisted, tortured souls.  You shield yourself from it as much as you can, you try at least to be kind, caring, in everyday life.   It’s not hard to be those things, not really - is it?  To just get on with your own life and let others get on with theirs, peacefully?  We're lucky here, imagine life elsewhere... but still.  I slip back into a restless slumber, these thoughts swirling around, wondering what nightmare reality I’ll be reading about on Tuesday, things most of us will never be able to understand.

I’m due to go into central London in the morning too.  “Don’t go”, Mr SDS pleads.  “Don’t go if you don’t have to”.  But I do have to.  I’m very aware that I live much of my life – out here in the quiet countryside - inside a cosy bubble.  There’s the irony:  probably the biggest danger I face on a daily basis is that of an insidious, creeping paranoia about the world outside it.   I must defy that paranoia as much as anything else, I must go because I want to go.

So I get on the train to London, and on the tube, mingle with travellers in crowded carriages; there are extra police around, there are serious faces, I don’t think that Manchester is far from anyone’s mind this morning.  But there are smiley faces too - cities are gutsy places and they remind you: most people are alright, most people want the same basic, harmless things.  In the city of strangers I’m one of them, not going to give in to fear.

I have such a good day, meeting with lovely friends I haven’t seen in years – catching up over tea and cake and paintings.   I’d have missed all this had I let stupid paranoia win.  It's over too soon, and I walk back to catch my train through the metropolis, lapping up its sharp contrast to my usual habitat, here where the sirens are my screaming swifts and starlings, and office blocks and cranes pierce the sky instead of oak and poplar.

“This train does stop at Colchester, doesn’t it?”   My solitary daze is broken as the woman with two huge pieces of luggage, almost as big as her, asks me this.  I've just boarded too.  Yes, it’s the right train, so she sits across the aisle from me and continues to talk.

I’m drawn to her face, and in a split second of silence I’m reading her expression.  I need to talk, it says.  I need to talk about something. She has the air of someone who’s been awake all night, with a body tired but brain still buzzing.  Her bright blue eyes are a little watery.  Then she starts to tell me that she’s in the army, and she’d been called on duty in connection with the Manchester Arena incident.

As other people start to board the train, filling up the seats around me, I could just withdraw from the conversation with the woman across the aisle.  But instead  I find myself moving seats, to be with her.  She needs to talk.  She needs to talk about something.

And so I spend the next hour in unbroken conversation with a complete stranger, who’s been awake for 37 hours and who, in spite of having been stationed in Afghanistan and served as a medic, tells me how intensely affected she feels by the night’s events.  By what she’d seen and heard, what she knew so far, what lies ahead too.  I let her talk.  My eyes are a little watery.

But we speak about other stuff too, and some stuff I never knew, because I’ve never chatted to someone who’s in the army, it’s a world away from mine - a world away from my cosy bubble.  I’m so glad I stepped out of it today; I learned so much more than I ever bargained for.

There’s no punchline to this, no big revelation… I just want to express it.  My train companion is going to stay in my mind for a very long while.  She needed to talk, and I’m so glad I could listen. 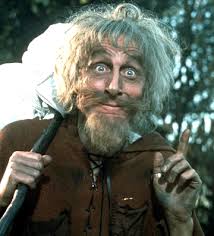 Just heard news of the death of Geoffrey Bayldon yesterday, at the age of 93.  One of my favourite actors, he was best known, I'm sure, for his fantastically animated and utterly convincing portrayal of Catweazle, the eponymous time-travelling character in what has to be one of the best children's TV programmes ever made.  Who could forget electrickery, the telling bone, Castle Saburac and Touchwood the toad?  And "Nothing works"! I'm sure its magic rubbed off on many of us of a certain vintage and may explain a lot...

He was known for many other parts too, not least the Crowman in Worzel Gummidge as well as a teacher in the superb film To Sir With Love; he even played the role of a butler in the tea party scene in Marc Bolan's Born to Boogie.

The power of pop

Just a quickie today, but had one of those moments yesterday hearing something on the car radio and I'm sure you'll know the kind I mean:  Mr SDS was driving and we were nattering away, but when the intro to this song started up I had to tell him to "Shhh!"   "It's almost a bit like power pop!" I said, "...'78/'79 jangly power pop! I need to know who it is..."

Tuning myself in, what I heard was actually sweet, shameless, modern pop.  The kind that just makes you want to smile because it's simply pure and real and catchy.

We then got stuck behind a maintenance lorry at some roadworks  'cause Anglian Water were digging up the pavement and I was so pleased because it meant I could hear the rest of the song without it having to battle against the engine noise (the joy of a start-stop system!) It will now forever be associated in my mind with that little section of the A131.

Anyway.... it was Declan McKenna with 'Brazil'.  He was just 16 when he wrote and recorded this. He looks so young in this original video, aww!  (It's since been updated - I much prefer this earlier one posted below).   But reading up about him reveals a maturity beyond his years; he self-released this as his first single in August 2015 and, in spite of his lightness of touch musically, his lyrical content is darker and political - a criticism of FIFA awarding the World Cup to Brazil in 2014 without addressing the effect of the huge degree of poverty on its people.

He's touring this month and has an album out in July.  At the risk of sounding like an old fart, he helps restore my faith in....oh dear, do I really have to say it like this?!.... the 'youth of today'...