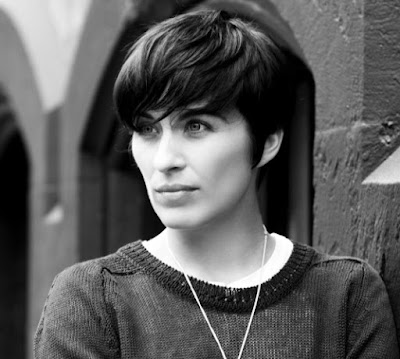 Oh, DC Kate Fleming, please save the day and tell me you haven't fallen for Dot's manipulative lies!

I've been literally on the edge of my seat at times during 'Line Of Duty' - and I do mean 'literally' in the literal (!) sense and not in the way it's so often misused (like "I'd literally cut off my right arm to see him again" or "I was so embarrassed, I literally died"...).  It happened last week when Steve was suspended...  the frustration and the anguish on his face..!  And  at the tension when Dot and Lindsay Denton were in the car.  How is it all going to get wrapped up in the final episode?  Who is pulling the strings?

I can hardly wait 'til Thursday.... not just because of my girl crush on lovely Vicky.

Weirdness on an English walk

Not quite the follow-up to my last post that I was intending, but I'm still on the subject of fear in the fields of England....

‘Would it kill you to say hello on a country walk?’ is the question asked in this article today and I found it quite apt.

What do you do?  Generally I say a quiet “hello” or at least smile.  Seems  to me that if you’re on an empty path with no-one around apart from one other person heading your way, who then passes within touching distance,  it’d actually be quite odd not to openly acknowledge their existence.   Even if only with a cursory nod of the head – it doesn’t have to be some big, bold fanfare of a greeting, just a subtle signal that communicates, ”I’m human and so are you”.  At the same time, I know that when walking alone it’s often to be exactly that – alone - so a lengthy chat about the weather isn’t on everyone’s agenda.    But a smile will do.  A smile and a “hello” if it feels right, and then on your way.

Yesterday I went out for some fresh air and took a familiar route, part of which is up the long drive to a manor house, open to the public.  You can park along it too;  people often leave their cars on the verge and then walk their dogs across the adjacent fields.

As I made my way down it I passed a lone parked car and was faintly aware of a grey-haired woman behind its open boot –  some yards away to my right.  Bearing in mind what I said above, I turned my head briefly in her direction and smiled.  It was one of those vague expressions you cast out when you’re not really sure… not close enough to speak but not far enough away to pretend you can’t see the other person.   It was little more than a glance really.  I couldn’t even see her response as she was obscured by the raised boot of her hatchback but I wasn’t bothered, the point was I’d just acknowledged her presence with a quick friendly gesture as I went by.

I was still walking away when I became aware of her voice.  I thought she must have had a child in the car, or perhaps a dog – I couldn’t tell.  She sounded cross, though.  Oh dear, maybe it was a hen-pecked husband?!  But she was also getting louder, as if to compensate for the increasing distance between us – as if for some reason she wanted to keep me within earshot.  Then I started to tune in to what she was actually saying…

She got louder….. this was sounding very aggressive now…  really shouting.  As I got further away it was developing into quite an indecipherable tirade and all I could make out was

“(something or other) you”

and it suddenly dawned on me who this “you” was:

I know, I know, I should have just kept walking away but two things were bugging me – one was that  I still couldn’t really understand if she was talking to me and if so I wanted to know - why? what?  The other thought flashing through my brain was that, while I’d walked merrily past, was she actually struggling with her car and thus perceiving my benign smile as rude (in the way that you would if you dropped your bag of shopping all over the street and someone went by with a grin without stopping to help you pick it up)?  I know, I over-think these things.   But perhaps I could make up for this misunderstanding by helping her now; maybe she was in trouble, and frustrated?   So, anyway, I stopped.  I walked slowly back towards her and I said – very gently – “I’m sorry, but were you speaking to me…?”

Studiously avoiding looking in my direction, she yelled angrily, “NOT PARTICULARLY!”  (Weird).  She was short and stout, probably in her early‘70s, apparently sober, very well-spoken, neatly dressed and unbelievably stressed.  By now I could see there was definitely no-one else in the car (no hen-pecked husband.  At least not here).

I  wanted to be conciliatory, calming.  “I'd only smiled to say hello,” I ventured, not moving any closer “I didn’t know if you wanted some help…”  but she drowned me out, almost hysterically  –

I don’t know if I can impart here quite how weird it was.  I'm sure it just sounds daft, but it was so bizarre.  I think it felt particularly surreal because I was simply taking a tranquil country walk in a public place, minding my own business, at peace with the world and with myself, when I suddenly found myself on the receiving end of this abuse and misplaced aggression, and from someone whose external appearance seemed at odds with her behaviour, if you know what I mean.   She spoke to (I mean, shouted at) me as if I was somebody else, someone who wasn’t me.  I’m a fairly small, non-threatening, middle-aged female… and here’s an older woman bawling at me to “Go away!”  like I was some kind of thug.  That’s what got to me, I suppose.

I muttered “Okay, bye” (no idea why!)  turned back around and walked briskly home, but was surprised to find after a few minutes my legs started to feel wobbly and my eyes began watering.  Silly, I know, but I guess it was just a bit of a shock.

I also wondered what was behind it all, what else she may do or had already done, and if she will get the psychiatric help she needs.  Something's clearly wrong.

Plus I’ll be more careful about smiling at people in the future.  And I've kind of gone off the idea of walking up that route again.  Shame.
Posted by C at 23:16 18 comments: