I hope you’re all well!   My apologies to those whose  blogs I usually visit regularly and have neglected  but life has pulled me in other directions lately and I’m appreciating a little break from the online life.   Real life is quite enough, sometimes.

I never wanted this blog to be a place for too much sorrow or self-pity, so it’s with some reluctance that I mention today something that is undoubtedly sad (sorry).  At the same time I just need to put it out there.  I can’t quite believe it; less than five months after the distressing loss of my dear friend Andy, I’m trying to process the recent news about the death of another, Dale - one which came as a complete shock and has now left me feeling a little numb.  Oddly enough, both these lovely men were born in the same month of the same year, and were both artists, their work exciting, individual, often controversial, full of energy and spark.  Whilst very different characters, with each of them I had a quite extraordinary, low-maintenance, one-to-one connection and understanding,  never searched for but instead stumbled upon serendipitously, the kind which is really quite rare and therefore precious.    I even introduced them to each other once - isn't life strange?!  But I’ve never been one for lots of friends – having always favoured quality over quantity (!) - and I am so sad to have lost two such loved ones in so short a space of time.

That said, both inspired me with their optimism and selflessness – both of them clearly wished to spare their friends the worry and pain of what they were going through - and it feels wrong to write here in anything other than a humbled tone.  The last email I had from Dale, just weeks before his death, was full of positive thoughts about the future and made no mention of the cancer which had already taken hold.  I was oblivious.

By way of lifting this a little, let me revisit something I wrote about Dale on this blog some while ago, although I never mentioned his name at the time.....  I'm sure he wouldn't mind.

My dear friend has a memorable way of describing himself, which is: “great at art, shit at life”. He can drink three bottles of Cabernet Sauvignon and still walk in a straight line, plus he has the energy of someone half his age, but he's the kind who forgets he's left a bath running and, on discovering the flood, decides to let it soak into the floor because he's “going out”. Somehow he gets through life relatively unscathed, surviving on creativity, charisma and an occasionally misplaced degree of optimism; I think he may also have superpowers.  I've never known anyone like him and his chaotic life has left me breathless at times.

Before he moved away to another town, we used to meet quite often for a natter about art.  Well: art, people, life, the universe and all its contents. I sat on his sagging sofa, surrounded by dozens of pieces of his striking (and frequently controversial) work, which filled every available space in his living-room-cum-studio. We drank wine in the afternoon out of chipped mugs, and I kept my coat on in Winter when he couldn't afford to feed the electricity meter for heating. I listened to tales of his latest unrequited love and money woes, stories you wouldn't believe... or wouldn't want to... yet he always rode through his problems with admirable positivity.  The wine (for there was always enough money for that kind of juice, if not the other) was often, almost ritualistically, accompanied by Maltesers, served in a ceramic dish. When the dodgy cassette player was actually working, he'd play secondhand tapes found in charity shops; it could be Henry Mancini one day and Happy Mondays the next.  Sometimes we went out - one time I took him to an exhibition of Syd Barrett's paintings at my old college (which was also Syd's); he was perfect company.  He's also the only person I've known who's left the house in odd shoes; perhaps the same could have been said of Syd...?!


Here is a tiny piece of collage art (only a few inches square) that he gave me several years ago: 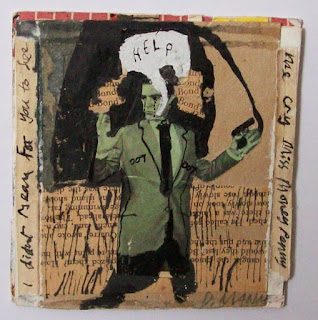 I Didn't Mean For You To See Me Cry Miss Moneypenny 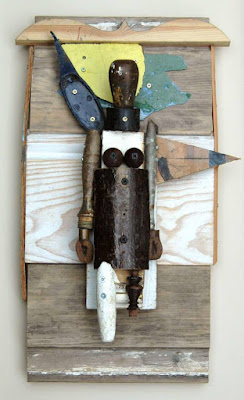 (See some more of his work in this post too: Travels in East Anglia )

Gallic-sounding dreamy bossa nova ye-ye pop electro psych by Beyond The Wizard's Sleeve (terrible name!) - from Richard Norris and Erol Alkan, with Jane Weaver and Hannah Peel on vocals - and a video that makes you feel like you've just stumbled into an episode of The Avengers.  I thought you might like it!

Beyond The Wizard's Sleeve: Creation
Posted by C at 11:41 3 comments: