The Summer of 1978 seemed a strange, transitional time, musically as well as personally.  I’d just turned 15 and punk was rapidly becoming my main thing, but there was so much still at odds with it.   For instance, I was never going to hear it down the little fortnightly disco at the cricket pavilion (unless you counted the Boomtown Rats), yet I still went that Summer, and I still danced.  My friends and I went to see 'Grease'; we wore our Jam badges, we giggled at John Travolta.  It shouldn’t have been our kind of film but there’s no denying, we enjoyed it.  The boys we fancied rode Yamaha FS1Es and only the most daring of them had an ear pierced.   I’d ventured into what seemed like the dark, adult realm of Sex Pistols and safety pins,  but the residue of the pre-punk, blue eye-shadow, strawberry lipgloss, Starsky & Hutch fan still lingered in me and my world.  I owned a plastic belt with the Coca-Cola logo all over it and a razorblade necklace.

Anyway, there was this song.  I really liked it, but the thing was - it wasn’t punk, it was disco.   Disco seemed to be at the opposite end of the spectrum to punk then.  Discos - proper big discos in town, I mean, not our cut price cricket pavilion ones - were full of cliques of mean girls and the sort of blokes who'd beat up anyone in straight trousers.  But still I liked this song - it had a relentless bass-line and a nagging chorus with a lyric that was so not my thing;  we’re gonna boogie oogie oogie ‘til we just can’t boogie no more.

Haha, do you remember it too?!

Well I’d forgotten all about it until I came across a UK singles chart list from July 1978 the other day and then got mildly obsessed with it and the memories it evoked: Boogie Oogie Oogie (the clue was in the lyric) by A Taste Of Honey.    That week in the charts, You’re the One That I Want was No 1,  and the Smurf Song was No. 2.    A few places down there was quite a diverse mix of artists, in fact it seems weird to think of it now as I wouldn't have remembered them being in the same timeframe: James Galway, Showaddywaddy, Lindisfarne, Boney M, Renaissance, ELO.   Then further down – in the 30s -  it got really quite cool and definitely up my street with Buzzcocks, Sham 69, Xray Spex and Steel Pulse.  With all that going on, Boogie Oogie Oogie was not a song I “should” have favoured at all.

But memories of it, like so many things, are inextricably linked to the personal landscapes they inhabit, and I can’t separate this song from a week in July 1978 spent in Sussex on a Geography field trip with my school year.   Like something from the (wonderful) Please Sir! film, it was that peculiar marriage of school life and away-from-home freedom.  It was a week of giggling fits (those truly painful ones, when your lungs feel as if they're going to burst through your ribcage), of  bags of Chipsticks smuggled in satchels for midnight feasting, of sneaking out of places we should have been and sneaking into places we shouldn’t, the covert smoking of Rothmans in the woods, ghost stories and glow-worms, packed lunches and sunburn, and seeing teachers drinking beer. Well, you know, I’m sure.

Boogie Oogie Oogie always seemed to be playing on the little radio my schoolgirl friends and I took into our accommodation block, a long wooden chalet with greasy windows.  It was next door to one with German students, both male and female, who reportedly wandered around in it with no clothes on and weren’t embarrassed.  Oh, those liberal Europeans! 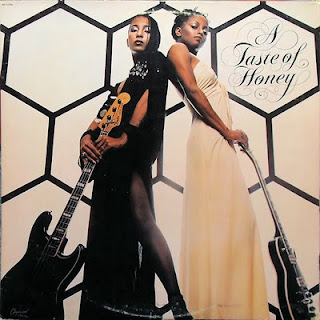 What I didn’t realise at the time, though, was just how cool the two front women from A Taste Of Honey were.  The single peaked at No. 3 in the charts here, and while I remember hearing it all the time I don’t recall ever seeing any footage of them - I'm sure I’d have been so chuffed to see them play their guitars.   So, finding this performance below was quite a treat, even if it is nearly 40 years too late.  That smiling confidence, the fast funky bass, the bendy guitar solos (there’s a kind of Isley Brothers sound coming out of that Stratocaster).  Even if you don’t like the song, I promise you the way they play their instruments is a joy to watch.

Plus they were right, lyrically - weren't they?!

If you're thinkin' you're too cool to boogie
Boy, oh boy, have I got news for you
Everybody here tonight must boogie
Let me tell ya, you are no exception to the rule.