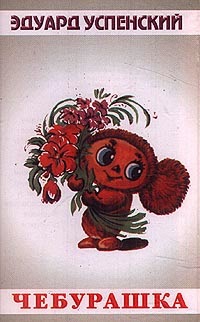 Life is so full-on at the moment I've just had no time nor energy to post or comment much lately (so sorry).  I'm still reading, though, when I have chance, and hoping things will return to a more relaxed pace soon.  Meanwhile, because you mean a lot to me and you know I would never wish to neglect you, here's a little something to make you smile...

I first saw 'Cheburashka', a 30-minute Russian animation from the 1960s, in the support slot to Eels on their With Strings tour when I saw them in Nottingham (several hours away but the tickets were free!).   Oh, it must have been about 8 years ago now... but what a great, different idea for an opening act.  I was somewhat smitten by the furry little big-eared, big-eyed character, just as I now am by the Meerkat idents used in the Corrie advert breaks - baby Oleg reminds me of Cheburashka - brilliant.  (Just a shame that's all linked up to advertising, they're too good).

So here's a poignant little song from the film, sung by Gena the Crocodile, to tide things over for a while in my absence.

Email ThisBlogThis!Share to TwitterShare to FacebookShare to Pinterest
Labels: cheburashka 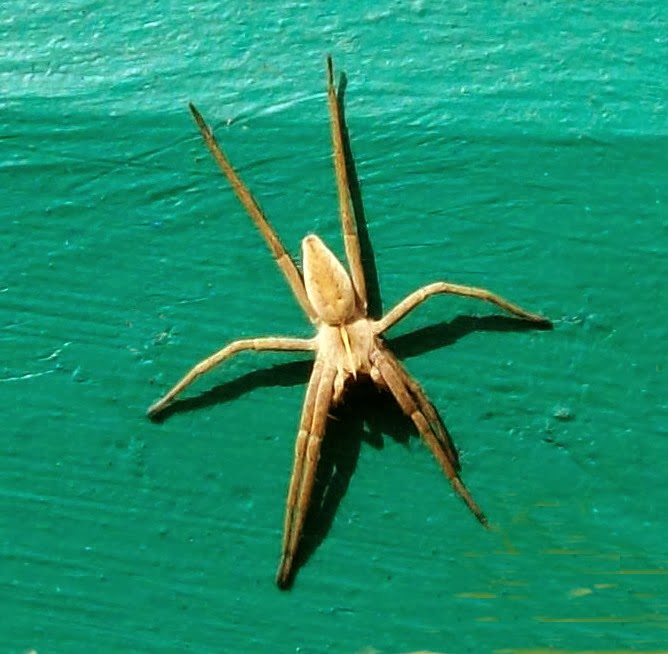 One I photographed earlier

Time to do a bit more PR for my eight-legged friends, you know how much I love them.

I've noticed a lot of wolf spiders about lately, mainly because the sun has finally come out these last few weeks and wolf spiders like it. On any warm sunny day, if you look closely at exposed walls, low lying plants or bare ground, you're bound to notice a few of these creatures, just basking. They come in various sizes and colours but as far as I'm aware they all have the same distinctively pointed abdomen and a blunt sort of head with quite obvious fangs. They also tend to sit around (you know what I mean) for a long time in the same pose - with their rather downy-looking front legs close together pointing forwards.

There are two things I especially like about wolf spiders. Firstly, as part of the mating ritual, the males offer their intended females a gift. It comes in the form of a ready meal – a dead fly (wrapped, of course, in the finest silk). It's not exactly altruistic; not only does he do it to get his legs over, but also because without this dinner it's quite likely he may end up being eaten himself. This way he can just get on with mating with her while she tucks in to her main course. I consider myself very geeky privileged to have watched this courtship behaviour one day last summer (and meanwhile, in an anthropomorphic parallel world, a wolf spider blogs about human voyeurism).

The other thing about wolf spiders concerns the female who takes great care of her egg sac and carries it around with her. A practical reason for this is that wolf spiders don't weave webs, so have nowhere to leave them as they are always on the move, hunting down their prey with stealth (and venom). Anyway, she carefully carries this cumbersome sac beneath her, raised up slightly from the ground so as not to cause damage, and then when the eggs hatch after about 7 to 10 days... oh, this is the bit I love... for the next week or so she carries her tiny babies* around on her back.  Wolf spiders – many species of which are common around the world – are the only ones that do this. Sweet, eh? Well... I'm smitten.  And it's funny how when you're interested in something you can effortlessly store all this useless information, yet still struggle with your nine times table.

Over the years I've fantasised about many things, some of which I really shouldn't go into here, and, in spite of what you may have gathered from one or two previous posts, Ricky Gervais is not one of them. Up until very recently, nor were kitchens. I've just 'accepted' all the kitchens I've ever known: the ones in rented, damp, down-at-heel flats with their oatmeal wallpaper, pockmarked lino floors and brown bead curtains in doorways... I'm a tolerant soul. Our last home was different in that it was a new-build apartment and its kitchen cupboards had doors that actually shut properly, but the ratio of available floor space to size of an average human foot was not great. I mean, we quickly learned that it was easier just to walk backwards than to attempt a full turn, especially when holding a frying pan.

We moved here over a decade ago, to a very different property - a 200-year old cottage with all the nice things that 200-year old cottages have, such as woodworm and an absence of right-angles. 'Charming' in estate agent speak. It is lovely- but tiny; it would be a two-up one-down with an outside loo if it weren't for a more modern extension tacked onto the back to house the kitchen and bathroom. Well, I say modern, but this 1950s addition is where things stop being quite so lovely. Someone – presumably someone with as much knowledge on building kitchens and bathrooms as me (perhaps less so, I was a dab hand with the Airfix Betta Bilda after all) – installed cheap units as wonky as a Rubik's cube in mid-turn and a shit-coloured lino floor (it makes you want to wipe your feet on the way out) complete with mysterious lumps carefully preserved beneath. The concrete step under the back door has cracked so much that when I open it on damp mornings I have to remove small confused slugs and the occasional back end (or is it front end?) of an earthworm from the threshold – I'm not exaggerating.

So it is with some excitement and anticipation that we've decided – and can now just about afford - to do something about it. And I think I must have finally come of age because, for the first time in my life, instead of fantasising about things like curry and kinky boots, I'm actually fantasising about kitchens. (Oh, and bathrooms. That 1970s peach suite has to go.) 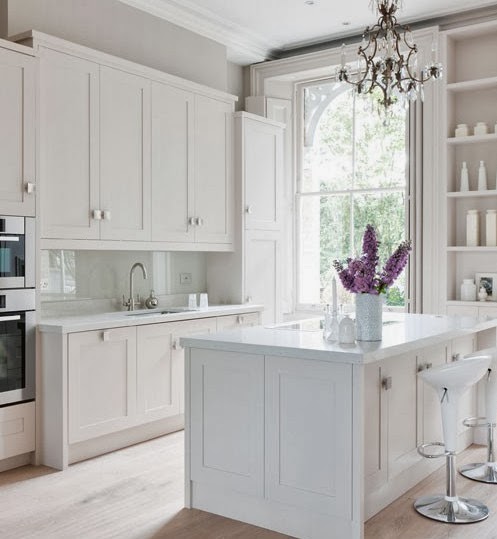 It's June already, I can't believe my 18th birthday is only a month away!

I've spent some time this week rearranging my bedroom and it feels more like a little pad, I pretend it's my flat. Now I just have my mattress on the floor and I saved up and bought a stereo (turntable, tuner and cassette deck).  New albums I've been playing to death lately are the Au Pairs 'Playing With A Different Sex', Psychedelic Furs 'Talk Talk Talk', Kraftwerk 'Computer World' and Positive Noise 'Heart Of Darkness'. I've put this great Nosferatu film poster above the bed. Scared the life out of me when it fell down in the middle of the night and I awoke suddenly to find a vampire on my head (although Klaus Kinski does look rather cute in a bald, pointy-eared, fang-toothed kind of way).  So now it's stuck back with an entire packet of Blutac. 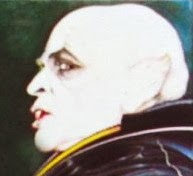 He looks a bit rough in the mornings

College is ok - Jill came in to visit the other day, I miss her from the Foundation Year but she's fine, she's gone very London now and has been hanging out at Le Beat Route - I feel very provincial now by comparison!

Been a strange year without Dad in the house but Mum is a lot better after her breakdown. It was the worst she's had, we're used to her depression when she stays in bed all day but we knew that things had got bad when she started saying/doing really odd things again as well.  She obsessed about painting her bedroom orange and wanted us to do it for her. Orange! Then she suddenly started reading the bible - we have a really old one in the house inherited from Dad's side of the family but nobody ever looks at it.  We're all so non-religious and this just wasn't like Mum at all, the way she was talking about stuff too.  It was a few months ago now but anyway A called Dr Lewis, he came over and arranged an ambulance - they took her to hospital that same afternoon. It was horrible seeing her wrapped in a blanket and wheeled out to it, like she was physically ill even though she wasn't. I actually think she was relieved, though. It was as if she was feeling, “I don't have to try any more. I can just give in to it” - like she'd reached rock bottom but at the same time a turning point, a time to let the doctors step in I s'pose.  A and I both cried after she'd gone but we were relieved too, and then we were fine on our own, in fact it was really nice having the house to ourselves for several weeks. We worked out our menus (macaroni cheese every Saturday) and we kept the place clean, it was like being a true grown-up with a house of my own (but sharing with my big sister). Hospital visits were hard, I hated going.  But anyway she got better, came back home and things have returned to some kind of normality. I haven't seen Dad in ages, don't know what he's going to do about my 18th (maybe he'll visit, that might be a bit strange).

Great news today! P has bought tickets to see Kraftwerk at Hammersmith Odeon so K and I are going with him and L. It's on the day after my birthday and I can't wait! Now I'm just wondering what to wear. 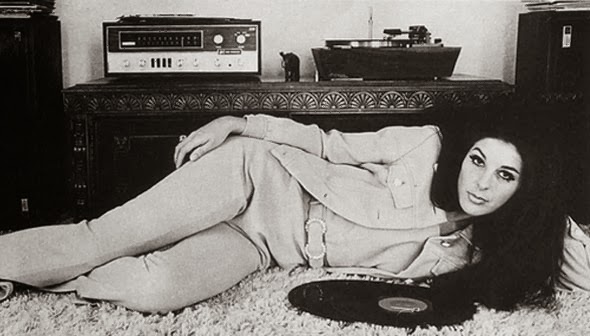 I first saw and heard Bobbie in 1969 when I was six and she was in the UK charts with 'I'll Never Fall In Love Again', making it to No. 1. She was No. 1 to me too;  the crush I had on her was as big - bigger, even - than her hair. Talking of which, her long, dark, bouffant hair was a significant part of her appeal to me then (I hankered for two things as a kid, a head of raven locks and a Tressy doll, and never had either). When the song came on Top Of The Pops or Radio 1 I would abandon my Fuzzy Felt and be captivated by this American singer with her sultry Southern vocals and her flared trouser suits. But there was more to it: a warmth in her face and her voice, something special that drew me in. Whilst that still remains to my adult eyes and ears, I can see and hear so much more than that too now.

Here's a great track, with an interesting subject matter, which is little less well-known here as it didn't make the UK charts.

(Hat tip to Singing Bear over at Grown Up Backwards who included this on a recent playlist)
Posted by C at 11:16 15 comments: