“I had one of those dreams last night,” I said to Mr SDS this morning. Yes, one of those dreams - you know the kind I mean. “It was with, oh, Bruce whatsisname,” I explained. We then went through a number of Bruces with whom I'm very glad I didn't do unspeakable things in my slumber:

Ugh no, not him with that histrionic voice!  That would have made me run to the hills.

Cue countless catchphrases leading to innuendo overload:
Nice to see you, to see you...
Give us a twirl!
You get nothing for a pair!
Higher... Lower...

But no, it was none of the above, thankfully. It was, you know, the one who made 'Withnail & I'... Bruce Robinson. I've no idea why he turned up in my dream but I don't mind admitting that I'm glad he did - far better than Ricky Gervais, whom I've had twice, for some bizarre reason.  But Bruce Robinson - such a talented, witty, edgy and really rather gorgeous man, I'm sure you'd agree. Apart from being a fan of his first film - who isn't?! -  I also enjoyed his cameo role in 'Still Crazy' about the fictional band Strange Fruit, and his biography 'Smoking in Bed' (thanks, A!).  I warmed to him even more when I read that he checks his kindling for spiders before lighting a fire so as not to inadvertently incinerate the little creatures, and that he's written some books for children which are illustrated by his artist wife. And last night he... well, I won't say... but it was all very strange and fruity and crazy indeed, as well as being in a public place in broad daylight (blush).  It was as if I'd "gone on holiday by mistake".

Email ThisBlogThis!Share to TwitterShare to FacebookShare to Pinterest
Labels: bruce robinson, dreams, i don't like iron maiden, we've gone on holiday by mistake, withnail & i

Work's a bit on the heavy ticket at the mo; nine and ten-hour days, seven days a week (with occasional blog activity sponsored by Nescafe Fine Blend).  All the book illustrators I know frequently have similar experiences: long hours, tight deadlines and low pay, so we must be doing it for love.  Besides, in how many other jobs do you get to think about what a young badger might look like blowing up a balloon?! 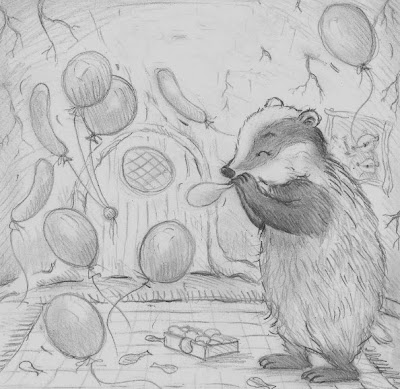 Email ThisBlogThis!Share to TwitterShare to FacebookShare to Pinterest
Labels: all work and no play, children's books, illustration

Hello
My name is Vladimir Kupriyanchuk
I developed an interest in you.
If you have the opportunity then please send me information materials and souvenirs (stickers, pen, t-shirt, notepad, poster or other.)
I would be very grateful.

This charming fellow contacted me the other day and I was terribly tempted to send him a little goody bag in the post.  He sent me his address and everything!  I could give him one of my pencils with a personally chewed end, several notebooks with my very own handwriting in and there's an unwashed T-shirt in the laundry basket that he might like.

It was so much nicer to read his message than some of the others, though, particularly as I'm not actually 'seeking sluts to fuck' at the moment.  (But apparently there are plenty in my local town and all you have to do is 'click here to enter'.  Good to know.) 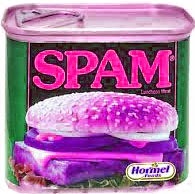 Email ThisBlogThis!Share to TwitterShare to FacebookShare to Pinterest
Labels: spam

But is it art? III

The small slab of wood that I just use as a coaster for my water pot when I'm working has evolved into a kind of 'paint stain palimpsest' (and try saying that whilst eating a Strawberry Chewit): 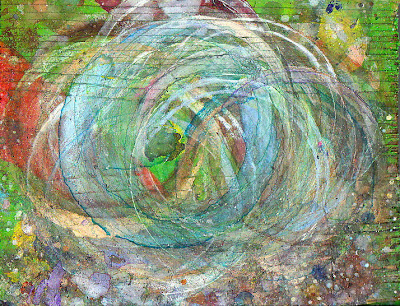 I'm so tempted to hang it on the wall!

Email ThisBlogThis!Share to TwitterShare to FacebookShare to Pinterest
Labels: art, but is it art

Look for me walkin' just any ol' way

Like the chubby girl who buys dresses three sizes too small as an incentive to lose weight, I bought myself some new Winter boots the other day in hope that I might actually go somewhere in them. A sort of 'have boots, will travel' thing:

...Well I might take a boat, or I'll take a plane
Might hitchhike, or jump a railroad train
Your kind of lovin' drives a man insane
So look for me walkin' just any ol' way...

Would these boots be imbued with magic powers that would remove me from my current life of virtual hermitude and transport me to new, exciting, vibrant places? Well, not exactly, but coincidentally not long after buying them (online, of course, seeing as I don't get out much) I did have to make several trips by foot. To the Co-op, the Post Office, the doctors, the hairdresser, that kind of thing. The irony was that I didn't even wear my new footwear for any of those; however, I did wear them when I was unexpectedly invited out for a drink the other evening. 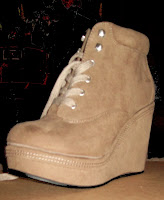 I tottered and teetered my way down the road in them, unused to wearing such high wedges because you don't really need high wedges when you sit in a shed all day long.  I met my friend, who's so tall she doesn't need heels but wears them anyway. She has legs as long as a Barbie doll's – not literally, obviously, as that would actually make her very short and somewhat deformed – but you know what I mean. Luckily she was able to help me across the road as I tried not to wobble nor break an ankle in the path of an oncoming pantechnicon, and we managed to get from one side to the other side in just under five minutes.  Plus she was able to forewarn me about low beams in the pub, herself being skilled at ducking under them whilst carrying a pint of Guinness and a scampi dinner without losing any peas. Actually I'm such a short-arse compared to her that I still didn't have to duck, although I did so anyway as a gesture of solidarity and it probably looked rather sweet.  It also reminded me of one of the first visual jokes I ever saw, which I replicate quickly for you here: 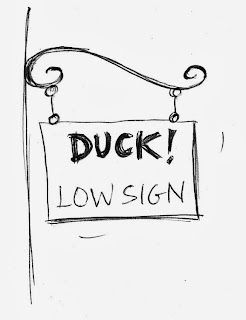 So I came home unscathed, and in fact so used to being elevated on these heels as the evening wore on that when I finally took them off it felt so different that I fell over, and that's the story I'm sticking to.

I'm looking forward to making more exciting trips now that the magic boots seem to be working, so in a few weeks I'm going down to London for this.  Assuming I don't fall over in the path of a No. 44 or get hit by low flying signs (or ducks?!), then hopefully I'll be able to report back.

Email ThisBlogThis!Share to TwitterShare to FacebookShare to Pinterest
Labels: boots, have love will travel, in these shoes, kirsty maccoll, shoes

What's in a name?

As anyone who ever fantasised in their teens about forming a band knows, one of the most important things to decide on was the name.  For my friends and me, it was the most important, and came way ahead of actually buying an instrument, let alone learning to play one.  Researching names wasn't too difficult in our punky heyday (and I've talked about this once before here ) - simply a matter of looking up suitably grungey words in a Thesaurus as a starting point.  Hence the 14-year-old Arseknickers never actually did learn to play anything, but the name of the band still adorned many a school exercise book.

Now, though, surely the pool of potentially catchy band names must be running a bit dry? We've had colours, regal monikers, numbers, Black this's and White that's, a short-lived phase of changing 'The' to 'Thee', countries, cities, trends for suffixing names with '-beats', '-men', '-girls' and '-cats' etc, cars, animals, weather conditions and foodstuffs, as well as a whole load of combinations of the above.

I suppose all the more obvious, short, sharp names already being allocated has given rise to more unexpected combinations of words; unrelated adjectives, nouns and phrases.  I think you can go to sites which generate these names, although that seems like a cop-out to me. But I guess anything is possible if it has a certain ring to it (and some readers may already know that I'm married to a man who was in a group with a particularly ridiculous name.  Which also includes a colour.)  It's no wonder then that the sentence, "sounds like the name of a band!" is frequently heard in this house when, for whatever reason, some random words get strung together in haste and sound, unwittingly, rather weirdly good.  Ok, not necessarily 'good' but certainly weird.  At SDS Towers, in the last week alone, we've had 'clubfoot chaffinch' and also 'liquid biscuit', both of which were uttered by me in a genuine attempt to describe something real (in the first case it was a deformed bird, and in the second a very tasty Vanilla Chai tea).   I'm rather partial now to taking it one step further and putting those two together to form the (multi-instrumental seven-piece fusion) combo: Liquid Biscuit & the Clubfoot Chaffinches...  Look out for them gigging in a town near you some time soon.  Well, possibly.  They'd probably be shit but I'd love to see their logo.

Email ThisBlogThis!Share to TwitterShare to FacebookShare to Pinterest
Labels: band names, half man half biscuit, trumpton riots, you heard it here first

Not so pretty in pink

Auntie Betty (who was not a real aunt but one of several neighbours always referred to as 'auntie' or 'uncle') used to call me 'little princess'. I didn't mind. It made me feel special and a little bit mystical. Pink was a colour I rarely wore, I couldn't stand frills and ribbons, and I preferred to play with my clockwork (clockwork!) train set than with baby dolls, but princesses were different in those days, I'm sure. Princesses were strange!

I don't know quite when the whole Disneyfied pretty in pink princess obsession of today started, but the regal fantasies of my girlhood were mostly scratchily drawn in monochrome and created by authors of a stature that I didn't know about at the time, such as Eleanor Farjeon and Rudyard Kipling. As with all the best fairy tales, there were often dark undercurrents.  They included handsome princes, fairies and witches but, thank god, no overpowering pressure to be pretty or pink.

This was one of my favourite books: 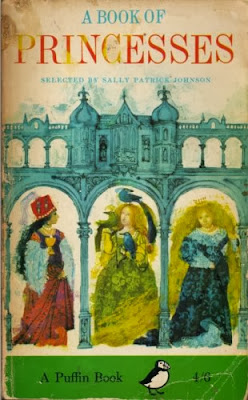 It included the 'The Birthday of the Infanta' by Oscar Wilde, 'Princess September' by W. Somerset Maugham, and my favourite tale by E. Nesbit, 'Melisande'. The writing was, and not surprisingly, fantastic, and my sister and I were both enchanted. I was recently given a 1962 American copy of the book and it was an unexpected delight to revisit the worlds of a princess whose hair grew an inch every night, a princess who had no gravity and a princess who had the longest nose on earth. Here are some of the lovely inky images from it, by Beni Montresor, who not only illustrated and wrote children's books but was also a set designer as well as opera and film director. There's nothing pink nor frilly about these... 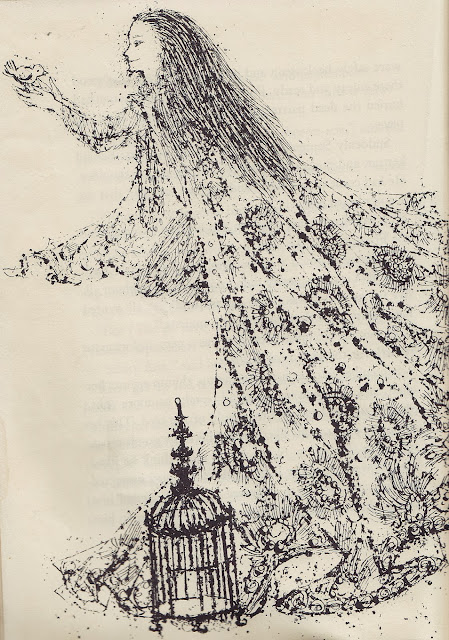 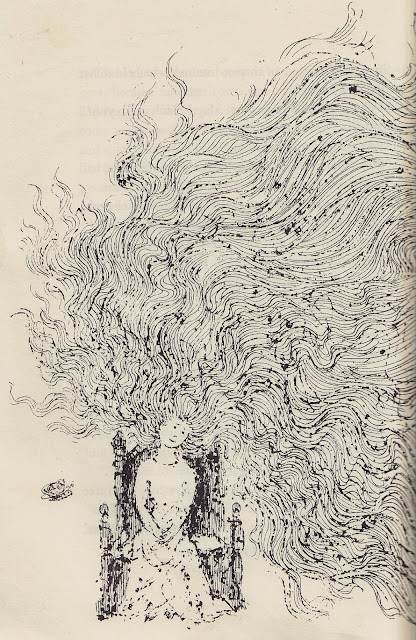 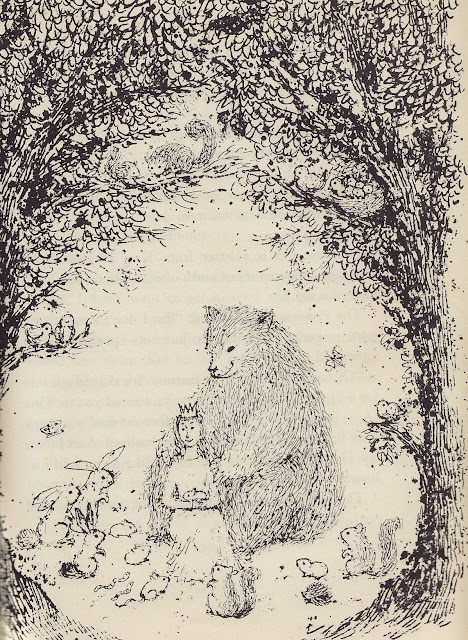 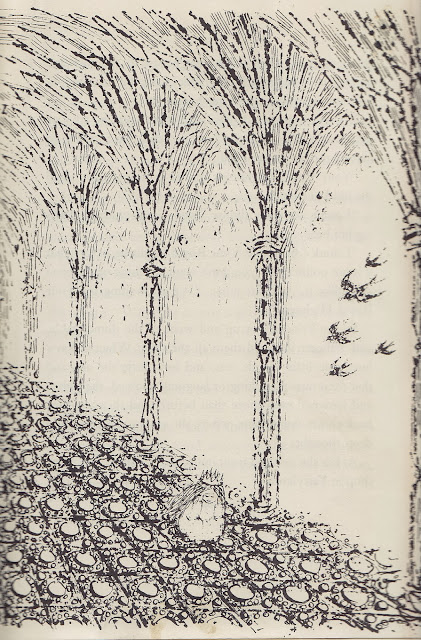