Not just a load of old shed

I thought I would give you a little peek into my shud. Or should I say: my “hovel, swyne kote or howse…to kepe yn beestys”…?
I know that looks like some strange text message (u just have 2 read it phonetically) but it’s the Medieval definition of the word ‘shud’, from which it’s thought our modern term ‘shed’ developed.  My shed (which, being my place of artistic pursuit and thus my studio, has developed one stage further into a ‘shedio’), is indeed a hovel and a house in which to keep beasts.  There are a few real ones in there, usually of the eight-legged variety, but thankfully most of the beestys in my shud exist only as one-dimensional characters: bears, rabbits and the like, in paint on paper. 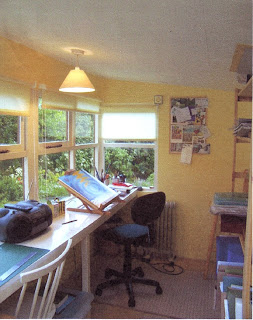 A very old picture of my (then) very new shedio﻿.  It's changed...
I love my shedio and sheds in general and I’m not alone; apparently there are whole legions of ‘sheddies’ out there.  There is a ‘Shed Of The Year’ competition in this country,  a national ‘Shed Week’ and a popular website devoted to all manner of wooden hut type constructions for fans.  The traditional idea of it being the haven to which the man of the house retreats to smoke his pipe and practise reeling his fishing rod (nudge nudge wink wink) now seems dated, as sheds become offices, studios, worskhops and so much more.  You’d be surprised (or maybe not) at how many Dr Who ‘Tardis’ sheds can be found in back gardens here and one ‘Shed Of The Year’ winner went for a Roman temple theme. A shed can be just about anything you want it to be.
If there was a Roman god of untidiness mine could be a temple to such a deity, but otherwise it wins no prizes.  I’ve just finished a long project and I haven’t sorted or cleaned it since the final brushstroke left the paper, so I took these photos to remind me just how bad things can get.  There is an almost Mary Celeste feel to it right now -everything is just where I last used it, pencils are scattered in disarray like jackstraws, screwed up bits of paint-soiled kitchen roll remain where I threw them. Stacks of sketches are piled up in the corner and the waste bin is full of the ones that went wrong; I shall just have to get in there next week and give it a good tidy-up so it looks more like a studio and less like a swyne kote.  After that the only place here resembling a hovel to “kepe yn beestys” is the howse.
Some very new pictures of my not-so-new shedio﻿ 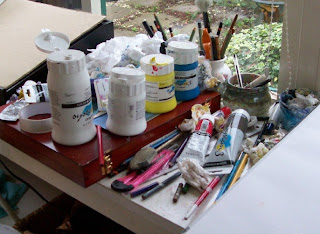 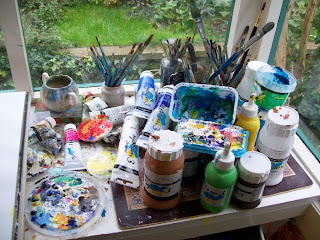 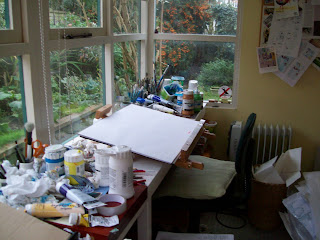 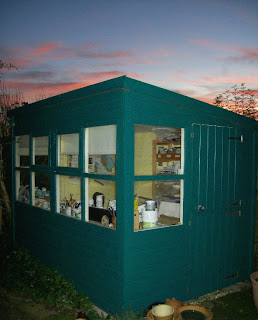 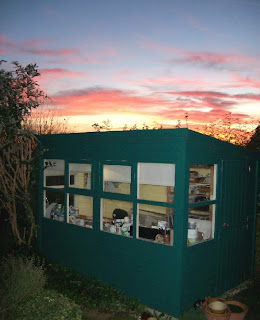 Email ThisBlogThis!Share to TwitterShare to FacebookShare to Pinterest
Labels: sheds, working from home

I know lots of people do it every day but, for me, travelling on public transport is a bit of a rarity.  Working from home requires no commuting and living in a rural area means that when I do occasionally go out I use the car.
I had a trip to yesterday though, so I went by train.  I like train journeys.  I love to absorb the gradually changing landscape as the flat fields we travel past become replaced by suburban back gardens and then industrial estates, and just before we are swallowed up by Liverpool Street Station’s gaping mouth we witness the rapidly developing Olympics 2012 site.  I used to like looking out at the old wasteland that preceded it, an unintentional wildlife haven on the edge of the urban chaos, but that’s another story.
I love observing my fellow travellers too.  I find myself wondering what their stories are, and creating some for them myself.
Yesterday a woman got on at my station and she was very, very drunk.  It was 2 in the afternoon.  She had an air of tragedy about her.  With a slur and an apologetic smile she paid for her ticket with pocketfuls of small change all spread out on the counter; it was as if she’d just raided a parking meter.
She had one of those faces that was probably once very attractive but was now worn-looking beyond her years.  The deep tan (with a reddish tinge) that looked out of place in an English winter had given her skin a leathery finish.  She got on the train and poured a drink from an ordinary vacuum flask, but I could smell spirit rather than coffee.  Then she produced an aerosol fragrance and sprayed herself all over, for what seemed like several minutes.  Her jacket, jeans and trainers all got liberal soakings in something rather floral.  If I’d been sitting any closer I would have too.  When we got to our destination I wasn’t surprised when she got up and left her large bag behind her, realising a few moments later and having to squeeze past everyone else going in the opposite direction, wafting gin and lilies with a hint of stale tobacco over us, her eyes a little glazed and her gait unsteady.
Her story?  I decided she was a prostitute down on her luck, maybe she’d got all that loose change from begging, or maybe she’d done a few very cheap, ahem, 'jobs' for some quick cash…  But I hope I haven’t done her a disservice and I do hope she was ok.
Halfway through the journey we go through some typical towns.  I can’t quite figure out how ’s much-parodied stereotypes became real and why they are so prevalent.  Is it just that fashions and tastes catch on quickly in some communities and then nobody wants to be seen as the odd one out? Or is it that, if you like those particular stereotypical things you naturally gravitate there and that vision of Estuary Englishness is perpetuated? Anyway, if I had needed proof that the only way in is the way, I simply had to notice the passengers that got on at Romford.  Every female seemed to be bottle-blonde.  (This is not meant to be a put-down, just one of those observations that jumps out at you.)  One in her twenties sat near me and was talking on her mobile phone. “No way!  I can’t believe it!” she exclaimed to her friend on the other end.  “Kelly’s had botox?  OMG!  I can’t believe Kel’s had botox… “  I felt slightly reassured by her reaction to the botox revelation.  But then came the unexpected punchline: “But she’s a dying woman…”   There was clearly a story there too, but I didn’t really want to make it up.
I was cheered up soon after by the sight of five young Elvises.  Well, I mean five lads dressed in full Elvis attire with big black wigs and mirror Aviator shades. Just one would have been eye-catching - five was surreal. I started to wonder what the collective noun for a group of Elvises might be.  When I put this to the friend I met with later, explaining that they’d all gone for the white-jumpsuit-and-rhinestone-belt look, the perfect answer came back:  why, a Vegas of Elvises.  Of  course!  I trust they enjoyed the Elvis themed party they must have been going to; it didn’t take much imagination to work out that story.
Posted by C at 22:04 4 comments:

I am a cliché

A lovely friend sent me a surprise in the post the other day.  I opened the package, pulled it out, and found myself grinning broadly just at the sight of this… 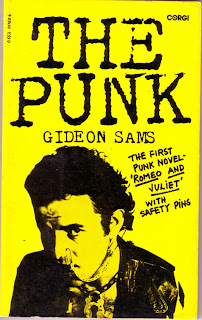 It was one of those books I had forgotten even existed until I saw its anachronistic cover again and then it suddenly seemed incredibly familiar.  I couldn’t even remember if I had owned it or borrowed it many years ago, but whatever the case it hadn’t been in my possession for that long.  Yet seeing it once more I just felt so well-acquainted with it.
I haven’t re-read it yet - I will do soon, just for the hell of it, and doubt it will take me more than an hour - but simply flicking through its pages, all 62 of them, is so evocative.  Everything about this book is a cliché (even its manual typewriter style typeface) and yet somehow that is exactly what confirms its authenticity.  You could say it looks crap now and it looked crap then, but I think it could only have been taken the slightest bit seriously at the time it was created, in 1977.  If it had been written in 1987, you’d notice the detailed fashion descriptions, the daft names (and dropped names) and you’d imagine it had been concocted by someone who’d pulled out all the most obvious references from some kind of ‘Punk Rock For Dummies’ type tome.  You’d laugh slightly disbelievingly and file it away under ‘punk parodies’ along with Kenny Everett’s ‘Sid Snot’ TV slot.
The  narrator of this self-proclaimed ‘first punk novel’  is ‘Adolph Sphitz’.  He goes down the Kings Road.  He sees the Sex Pistols, the Damned and the Clash at the Roxy.  He knows someone called Captain Vicious.  He shares his small, chaotic teenage world with other punks and…. Teds.  Teddy-boys – remember them?!  Who knows where they are now, but my recollections of a suburban punk youth are full of them.  In the England smalltown where I pushed a few boundaries as far as I dare (which admittedly wasn’t that far but back then it was easier to shock), Teds were ever-present.  Teds were the punk nemesis.  They were always a bit older and I have this image of them burnt into my memory, where they hung around chain-smoking on street-corners, their thin-ness emphasised by chunky brothel-creeper footwear, drainpipe trousers and big quiffy, brylcreemed hair.
Gideon Sams was only 14 when he wrote this book – originally a school project - and it shows.  I was around the same age as him at the time and if you had asked me to write my own version it would not have been that different in content.  I’d have done everything I could to make sure anyone reading it knew where my loyalties lay and how much I was influenced by a certain scene, as he clearly did too.  When you read his descriptions you’re reminded of the importance of detail to a young mind when it comes to identity – and the importance of that identity and sense of belonging to your chosen youth-tribe.  For instance, I love this description of one character’s clothing: ‘She was dressed in a pair of black cotton dungarees, and a blue, yellow and red pinstripe blazer. She was wearing pale blue lurex socks and black plastic sandals…’
This book is little more than a series of stereotypical freeze-frames of a time long gone but in some bizarre way, given a thirty-four year gap since last seeing it, that is enough to make me want to hang onto it now.  It takes me back to schooldays, buying that first Clash album, putting egg-white in my hair, listening to John Peel, hoarding safety-pins and skulking past those Teds on the street corner.  I was a cliché too.
As the person who sent it to me said, “it’s more a case of the existence of it that’s fun rather than any merit whatsoever in what is between the covers”.  (Thank you.)
Posted by C at 17:42 7 comments: