In the house where I grew up my dad spent most of his free time in a room we called ‘The Study’.  If that sounds terribly middle-class, it must be because it was.  It was a spare bedroom really, but it had the airing cupboard in it -  and the central heating pipes and pumps  held noisy parties inside it every night, so you wouldn’t want to sleep there.

I’m wondering now if the room ever got vacuumed or dusted; it wasn’t easy to navigate. It was shelved from floor to ceiling on two sides and in the middle there was a 1950s kitchen table, with blue formica top and metal legs, not that you could tell.  Just like the other makeshift cupboards around the room, its surface was buried under ‘stuff’.

By stuff I mean….well, for example, every single periodical that my dad had ever bought since 1959.  I can’t be certain but they had names like Practical Oscillator and Illustrated Semiconductor.  The sort with pictures of nude wires and semi-clad magnetic tape on their covers.

bent coathangers (could come in handy one day)

dismantled plugs (could come in…. etc. etc. - I’m boring myself)

Empty chocolate boxes, the inner workings of old biros, a kettle without a lid.

Shall I carry on?

A home-made – home-made!  by my dad! -  ‘tumbler’ device for polishing pebbles  - which was endlessly whirring, rotating and clattering like a washing machine full of stones (which it basically was)  yet not one pebble came out shiny, ever.   Why did people want shiny pebbles in the ‘70s anyway?  Just to be displayed in saucers on windowsills?

The irony is that I don’t think anything in that room ever actually came in useful apart from the noisy airing cupboard, and my lasting memory of its true worth was that it was where my mum once put a very weak newborn guinea pig  to keep it warm, wrapped in a towel in a box.  I came home from school to find this, much to my delight.  She (the baby guinea pig) happily survived and went on to live with us for several years, in a hutch in the shed.  Which is really where all the other above stuff should have been kept all along. 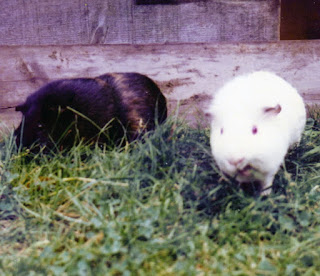 Email ThisBlogThis!Share to TwitterShare to FacebookShare to Pinterest
Labels: childhood

I think I’m about to find a time machine in my garden.  I’ve uncovered two things that lead me to believe this.  Digging down in the sandy soil beneath the prickly hedge a few years ago, amid the calcified skulls of poorly sparrows who perished in the cold and fragments of clay pipe that look just like their bones, I came upon an escutcheon. I even just love that word ‘escutcheon’.  It sounds so archaic. That little piece of metal which once decorated and protected a keyhole, a keyhole in a door to who knows where, from who knows when.

This little plot of land has been used by people for hundreds of years.  So I love it when I find the evidence of those who’ve left it behind, and long for the day when I might find an ancient coin perhaps, or a shard of pottery that dates back even further.  I love the way the worms, the moles, the ever churning, moving soil, turn up these random things.

Then, just a short while ago, amongst unidentified pieces of rubble and slivers of willow pattern crockery in the earth not too far below the surface, I came across this. 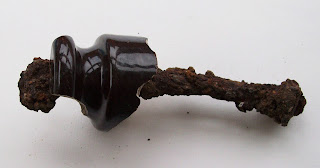 It seems to be a door handle.   A broken porcelain knob,  and all that can be seen of a number, perhaps a date - 67 - stamped into the unglazed surface. 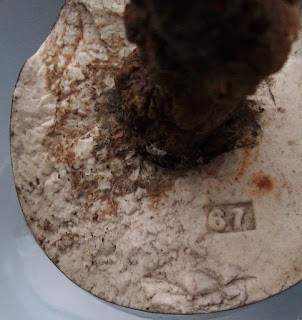 The handle bar now so bent, twisted, the rust growing around it like a living, organic thing. 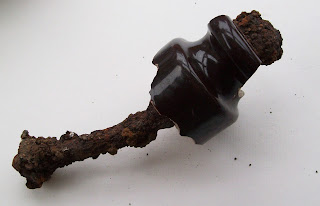 A keyhole, then a doorhandle. More thoughts inevitably follow.  Thoughts of locks and passageways and portals.    And if you were to tell me that there was a strange and spine-tingling story behind these finds, I would love to believe you.  What tale might there be?  The time machine beckons,  it’s out there somewhere, I just need to find the key, literally.    I'll keep digging.

Where would you have it take you?