Been a while since I last posted one of these 'But is it art?' numbers.  Just looked it up, nearly four years  - proof that I really am crap at keeping series ideas going.

Then I found something in the garden and I thought... yes... "But is it art?"

So here it is. 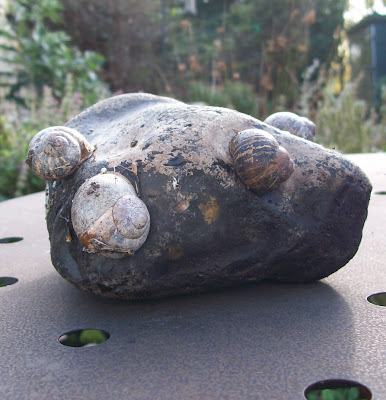 Just a lovely big old stone with some lovely big old snails stuck to it, bedded down for the Winter.  I'm just in awe of how particularly beautifully and perfectly they blend into one - it's as if they're part of it, growing out from it. 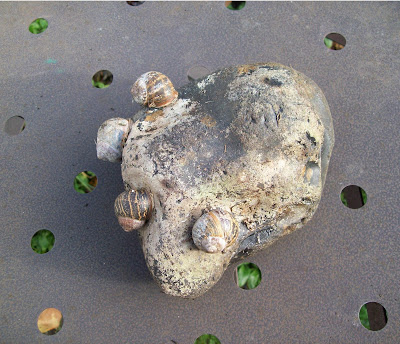 I took all these photos at the same time but love the way the different angles bring out completely different colours and shades in both the stone and the snails. 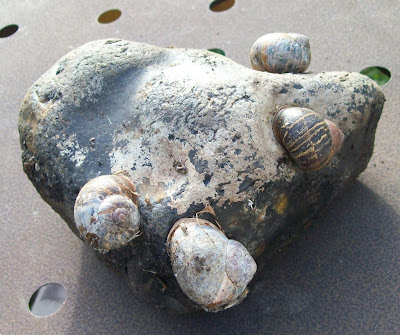 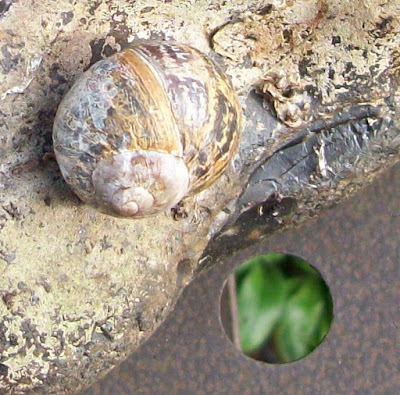 The stone is now safely tucked away again with the snails still intact in the hope that they'll survive the cold, as I am stupidly fond of snails - and stones.

It is art, don't you think?

Email ThisBlogThis!Share to TwitterShare to FacebookShare to Pinterest
Labels: but is it art, nature, snails

That’s the word.   That’s the feeling I had as the music and the cheers and whistles filled my head (and the delightful venue that is Brixton Academy) on Thursday night.  The love in the air was palpable.  As my gig buddy suggested at the end, it felt like the place was flooded with collective endorphins.

Throughout the evening I couldn’t help wondering as I watched her: what must it be like to be that woman on the stage, singing songs from across four decades, there with her ex-partner Chris Stein and fellow long-time band-member Clem Burke, performing to people she’s never met but many of whom have grown up with her?  What must it be like to BE Debbie Harry? And I think I was wondering that in a way I’ve never done before because, for me, it was her (and all of them - their)  real ‘human-ness’ that came across.  All the pictures I’ve looked at, all the magazine spreads, TV appearances and record covers, etc. became secondary because here, in the same room, were the real  thing.  In the flesh.   I felt honoured to share their space. 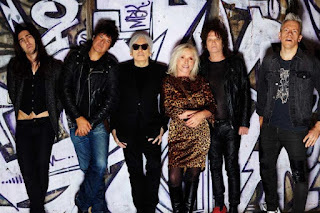 Thursday was quite a big deal for me, to be honest, for several reasons.  Firstly it feels like I haven’t been to a gig in about 100 years; also I’d never been to Brixton Academy before (I loved it).  And Blondie must be the most ‘legendary’ band I’ve ever seen.  I apply that description because it’s at this stage of their career and although I’ve seen one or two other acts who are equally well-known now, I only saw those before they reached that status, with no idea then how the future would unfold for them.  So seeing Blondie on Thursday was the opposite – a band whom I first read about and heard early on in punk days but have only finally got to see all these years on, their fame now long-established.

Debbie Harry is, of course, truly inspiring.  It’s hard to believe she’s 72.  I was worried at one time about seeing her perform for fear of her not living up to what I wanted her to be - it happens.  But there was no need.  She looks, and sounds, as if she could go on doing this for another ten years at least, but the speed with which time passes plus the reminder that we’re all getting on a bit is another reason why I was really pleased to take this opportunity. 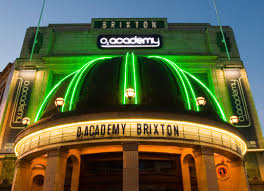 I’m not sure I can write a gig review as such, I don't really know how to and I would have had to jot down notes…. well, I was far too occupied being in the moment, happy just to be there and in such good company.   But I'll try and get some things down before it all becomes a bit of a blur...

There were certainly some stand-out points that spring to mind first – like the inclusion of ‘You Gotta Fight For Your Right (To Party!)’  in the middle of ‘Rapture’, and similarly the way ‘I Feel Love’was sigued into ‘Heart Of Glass’ to great effect.  I loved the impressive wigging out and guitar hero antics from the newer band members...


(Matt Katz-Bohen had one of these!) 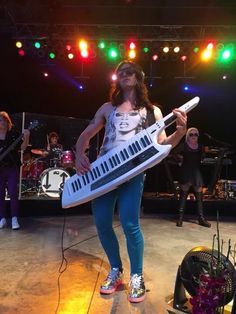 ...and some heartwarming spotlight moments on Chris (much respect to him.)  They were all excellent, though admittedly it was hard to take my eyes off Debbie.  I missed some of the detail in her banter and chat;  I’d read that the sound at the Brixton Academy can be a bit muddy due to the high ceiling, and it did affect the clarity.  Added to that was the odd tall person occasionally obscuring my view, so I think I missed one or two focal points as well, although the sloping floor really helped.  But none of that mattered too much, the connection and the presence were real, the adoration flowing both ways.

So all the songs you’d expect and perhaps hope for were played.  ‘One Way Or Another’ was the perfect opener as anticipation of their entrance reached its highest peak, followed by other hits  ('Hanging On The Telephone', 'Call Me', 'Picture This'....)  which were mingled with tracks less familiar to me from the 'Pollinator' album that was released earlier this year.  Everything just flowed... the jubilant energy just carried them, and us too.  'Atomic' really sticks in my mind still, all these hours later.  Then the inevitable encore started with an evocative mood shift via ‘Fade Away And Radiate’, before the uplifting ‘Union City Blue’, finally closing with ‘Dreaming’ - leaving electronic clicks and feedback etc. buzzing through the room while they said their goodbyes.  Glorious.  In between the main set and encore we were also treated to a screening of a collaboration with Joan Jett on ‘Doom and Destiny’.  The whole night was just the right blend of old and new material, all enhanced by the light show and huge video backdrop (special mention must go to the balletic film of a man who gave a whole new twist to the theme of pole-dancing, very homo-erotic!)  And Clem’s stamina was truly outstanding – sure, some might say he’s a bit flashy but, well - we want a show, don't we?  What a relentless, incredible powerhouse of a drummer.  I wonder who walked away with his discarded drumsticks at the end.

It was all being filmed for Sky Arts, but my memories of the gig will be different to seeing it replayed if I ever do, I've no doubt.  This time, at last, my associations with Blondie are characterised by the sensuality of it all, of physically being there, not just seeing them on film, or paper, or hearing them on record.  It's those other random extras that flesh out our memories too - like the two loved-up young men in front of us dancing together and embracing, and that long-forgotten feeling of my feet sticking to the floor as we shuffled out at the end of the night.   The sense of elation that you can only feel, not see.  And will Sky televise her wearing (and twirling) her 'Stop Fucking The Planet' cloak?  I hope so.

I know it sounds corny, but just being there returned me to a state of slightly childlike wonder. It was like being 14 again, even though it's forty years since I was, the same amount of time since Blondie first entered my consciousness.  Perhaps it would be apt to say: it's been a long time.


A warm shout-out to my charming gig buddy too for making it possible and being perfect company - these events are too special not to share, aren't they?

Quick mention re. the support act, as I was wondering who they'd be: a sharp-suited quiff-haired  three-piece from France called Mustang, who gave us an energetic blend of Gallic pop/rock’n’roll/rockabilly in their native language, but were kind enough to translate their song titles for us (and 'Le Pantalon’ sounds so much better than ‘Trousers’).  Good fun plus they showed great humility and were clearly honoured at being able to open for Blondie, and in return were well-received by a supportive audience.  The whole feel-good factor of the night started with these guys, so all credit to them.
Posted by C at 18:34 28 comments:

Well, can't keep it to myself, I'm so excited because I'm going to a very special gig next week.   Not only is it far, far too long since I've seen any live band, it's also one I really ought to have seen decades ago.  But now, thanks to some lovely serendipitous circumstances, it's not too late, and from the sound of things they've also really got their act together again in recent months.

If the title of the post wasn't enough of a clue, here's another...

...a great early live performance of a favourite song

Over the years I’ve had long drinks, long hair, long weekends, long waits and Long Ryders records but one thing I’ve sadly never had, nor am I ever likely to have, is

That’s why it surprised me the other day when I tried on some new jeans I’d bought mail order, 'Regular' in length, which is normally plenty, to then find they barely reach my ankles.   I think it’s a thing now - having trousers a bit on the short side.  I mean I reckon they're making them shorter deliberately to suit a fashion trend as, if anything, I'm shrinking too.   I once heard that 'sock porn' is a thing as well, where you expose the naughtiest glimpse of sock – a flash, if you like - as a tantalising interface between shoe cuff and trouser hem.

But showing just the right amount of sock is an art, apparently.  Your socks should be cheekily  revealed when you walk and sit down, but not when you’re standing.   I know.  Who makes this stuff up?! 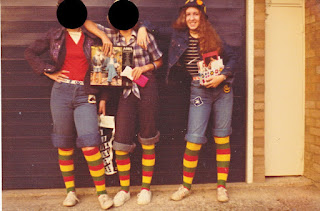 The art of showing your socks in 1976.
Can you tell what the album is?