Yes, I know, if you are at all freaked out by spiders you’re not going to want to read this post, let alone look at the picture… I do understand, they’re not everybody’s cup of tea.  But if you can bear it, I’d like to give these ones a bit of positive PR.
On Christmas Day I happened to be looking upwards and spotted something that warmed my heart – not Santa on his sleigh nor a shining star of wonder, but certainly there was a birth of sorts to be celebrated. Or rather, about twenty births (or should that be hatchings?)  Behold the spider babies, hanging from the ceiling! 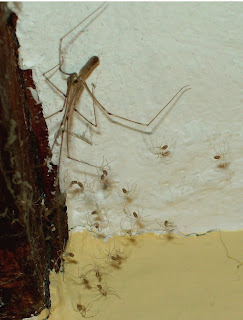 Mother and babies doing well...
Baby spiders are called ‘spiderlings’ and these particular ones are from the species ‘pholcus phalangioides’, more commonly known as ‘cellar’, ‘skull’ or ‘daddy longlegs’ spiders.  Here at Sun Dried Sparrows Towers we call them ‘spindlies’.  We’re pretty tolerant of them.  They don’t move around very much, instead preferring to just hang about really – usually from ceiling corners where they’re quite hard to see anyway.  I often wonder how on earth they survive; you don’t notice them catching a lot in their fine webs but, contrary to their somewhat delicate and fragile appearance, they are effective predators.  Other spiders, flies or bugs that inadvertently venture near them are easily killed and eaten, even if they seem much bigger or more robust than their captors. For that reason some people accept them as miniature pest controllers.
Spindlies are fragile in another way though in that they can’t take the cold - it literally kills them.  The species originated from warmer climes but have spread to cooler countries purely through being able to find heat and shelter in our buildings.  I suppose I should evict this family when the spiderlings are a bit bigger as there comes a point when you really don’t want to live in a house so full of eight-legged beasties and cobwebs that it resembles Miss Havisham’s room in Great Expectations.  However, I can’t help but have a strange fondness for these particular ones.  Spindly mum has carried the eggs with her in their sac and kept them safe since she laid them and now she’s staying with the littl’uns until they go off to corners new.  Apparently she’ll even feed them while they’re small, not a behaviour generally associated with creepy crawly life where parental care is rarely a characteristic.
When you think about it, they’d make the perfect pets.  No vet’s bills, no feeding required, no litter trays to empty nor walks to take on during cold winter mornings.  All you’ve got to do is make sure they don’t get too cold.  So… anyone fancy a spiderling?  I’ll do a twenty-for-one offer on them if you like.  Just as long as you remember: spiders are for life and not just for Christmas.
Maybe I’ll just have to take them to Fun Land?
Posted by C at 19:48 6 comments:

My two longest-standing friends and I try to meet up a couple of times a year and last week was one of those occasions.  We’ve known each other since the age of eleven, when we started at the same school, our home town’s equivalent of a 1970s St Trinian’s – all hockey sticks and Latin lessons.  We went through the same humiliation of wearing the awful brown uniform (which, for the first two years was a shapeless tunic because, the school’s Ministry of Uniform dictated, “we don’t offer the option of a skirt to the younger years because they haven’t yet developed waists”.)  Our bond of friendship helped to get us through all those awkward moments of adolescence, comparing notes on buying our first bra and fancying boys.  And developing waists, amongst other things.
We pooled our pocket money to buy Cadbury’s chunky chocolate bars from the tuck shop to share at break times and some years later upgraded this to the occasional Benson & Hedges, ten in a pack from a slot machine in town, having meticulously planned our movements well in advance to avoid being seen by grown-ups.  We’d sneak them into school and find a quiet corner of the playing field to try a furtive puff or two.  I’m pretty sure no actual inhalation ever took place.
By the age of 14 we were also into punk together.  We’d invade the local record shop on a Saturday afternoon and pore over the album covers, longing for the day when we’d saved up enough to buy one.  (see 'The first album you ever bought...?') We also made forays into the local hardware stores – rummaging through trays of bulldog clips and sink chains and any other strange looking metal fasteners or hooks we could find with which to accessorise our DIY clothes.  On the last day of term in 1978 when the school finally allowed a ‘no uniform’ day, we all got into trouble together.  It was our one chance to ditch the brown uniform and proudly wear our bulldog clips and Sex Pistols badges on our DIY clothes into school.  That afternoon we were called in by a teacher and given a stern talking-to; there had been complaints at our apparent lack of respect.  We could not have been awarded a better compliment.
We left school and went to different colleges, got jobs, got married, moved house a few times, but always kept in touch.  Now in our late forties, we meet when we can for lunch in our old home-town, our old stomping-ground, where none of us live any more.  And now our bond of friendship helps to get us through all these awkward moments of middle-age – comparing notes on a whole new set of life experiences.
As I sat there with my two lovely friends last Friday, and we reminisced about the time we had tried to write dirty stories in the school lunch-hour, only to be so mortified at the thought of them being found by a teacher that we tried, unsuccessfully, to flush the offending pages of our exercise books down the toilets, it seemed impossible that 37 years have passed since we first met.
Posted by C at 13:38 13 comments:

Forties ephemera and a missing mojo 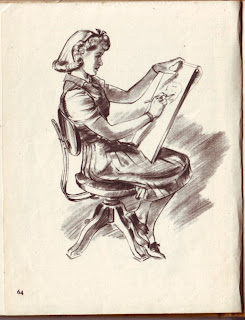 As people who know me are no doubt bored of hearing recently, I’ve mislaid my mojo (my creative one! It inspires and helps me draw…).  I last saw it when I finished the book I was working on, but now that job is complete and it’s nowhere to be found.  At others’ suggestions I’ve tried looking down the back of the sofa (where I discovered 33 pence, a furry peanut and one of those long bits out of a packet of Bombay Mix), and almost accused a friend of slipping it into their pocket when I wasn’t looking.  However, I’ve been here before, and I know it’ll turn up again some time, probably when I least expect it.  Until then I just have to find some substitutes.  These include, but are not limited to: music, wine, savoury snacks and one particular ‘how to draw’ book. 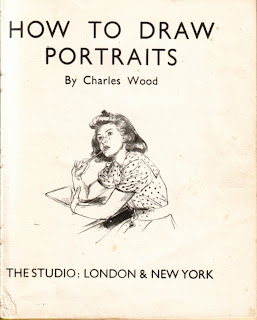 I love this little book.  It belonged to my mum when she was a teenager; this edition was published in 1944 when she was fifteen.
The beauty of it, for me, is that essentially nothing has changed – all the ‘how to draw’ principles are completely unaltered by the passing decades.  But the fashions are so of the time; the men are moustachioed and suave, the women look pristine, the families seem wholesome.  Knowing it was first published in wartime and, who knows, perhaps my teenage mum even took it down into the air–raid shelter with her, imbues it with an even greater historical - and personal - significance.  And it’s still the best ‘how to draw’ book I’ve ever seen.  Maybe my mojo will turn up somewhere amongst its warmly yellowed pages some day soon.

Until then, this book, some music and a glass of red will have to do. I really wish I hadn’t eaten that bit of Bombay Mix just now, though. 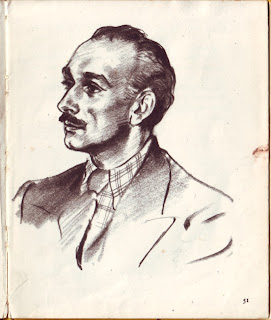 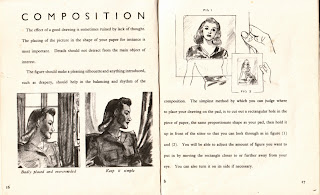 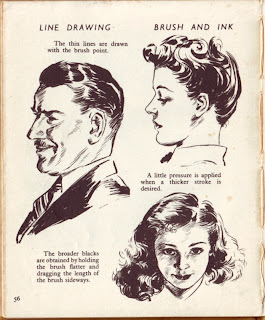 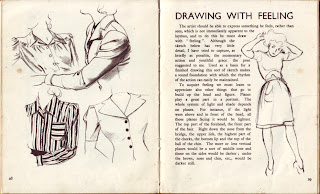 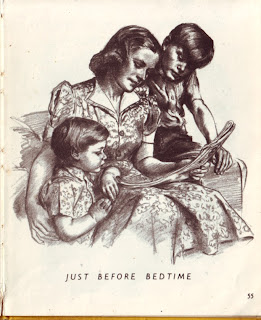 All images from 'How To Draw Portraits' by Charles Wood
first printed in June 1943
Posted by C at 22:00 5 comments:

There’s a chill in the air now in these English flatlands and a sense that Winter has finally arrived, albeit belatedly.
Much as I hate the shortness of the days, the frequent lack of light and all the practical inconveniences like scraping ice off the car windscreen and having to dry the washing indoors (freshly laundered socks and knickers are draped over the radiators as I type this) it is at least compensated by certain sights, sounds, smells, etc. which have an idiosyncratic charm.   I find it in stark skies and crunchy leaves underfoot, welcoming lights behind window panes, a waft of woodsmoke and wrapping myself up in a thick woolly scarf: the responses to Winter which have remained unchanged since my childhood, when I didn’t have to worry about de-icing the car and drying the laundry.
I think music can also be seasonal.  Some songs just sound better at certain times of year.  My favourite Winter (and Autumn) tracks tend to be a bit on the wistful side, maybe a little melancholy.  Thanks to the good man over at Anorak Thing blog I’ve just been introduced to one which captures the ambience perfectly and I can't seem to get enough of it at the moment.  It’s like tired daylight fading behind skeletal trees, sharp air seizing your breath.  And a north wind blowing south….
Philamore Lincoln: The North Wind Blew South
Posted by C at 17:02 5 comments: