My bestest most favouritest songs ever ever - part 2

When I first started seriously getting into music, it was all about the present.   I was in the moment, living it - why even consider the past?!  There seemed such a lot to be excited about in the late '70s and very early '80s that it simply didn't occur to me to investigate much else.  Other than one or two rare exceptions (e.g. Bowie, whose back catalogue seemed timeless enough to sit alongside the contemporary) I was only interested in what had just been released or was yet to be.  Truth is I was pretty dismissive of anything from the '60s, because it just sounded too 'old'...

And then something changed in the early to mid '80s, and 'old' became new - at least new to my ears.  A chance encounter with a various artists cassette, 'My Generation' introduced me to an alternative way of hearing things. 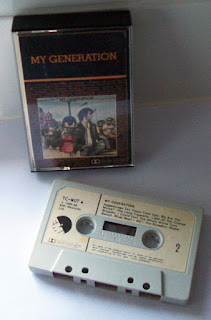 Tracks by the Yardbirds, Action and Tomorrow, for example, songs which wouldn't have registered with me before, started to sound exciting and different.  At the same time it seemed as if a new level (depth?) of bland had come to mainstream music - e.g in 1984 I was working in a record shop and the chart albums we had to play each Saturday were just getting more and more insipid (Paul Young: No Parlez / Lionel Richie: Can't Slow Down...ugh!); even the sharp edges of a lot of indie seemed softened compared to the punk and post-punk that I'd been so immersed in previously.  Yet now music from 15, maybe even 20, years earlier stood up well in the wake of such mediocrity.  Old was the new new - especially if it was relatively obscure.  There was a whole world of lesser known '60s psych, garage, beat and inventive pop being unearthed and it was so interesting and imaginative that it was as if a new scene was actually developing in real time (in a way it was, and had been for a couple of years, but that's for others to write about!)

Even better, working in the shop meant I was able to order, from the comfort of its back-room, albums full of  '60s underground gems being put out by labels such as Psycho, See For Miles and Bam Caruso, as well as imports of the US Pebbles and Nuggets series.  These compilations included so many songs that were unlike anything I'd heard before and I was utterly captivated.  One of the earliest of my new purchases at the time of its release in 1984 was 'The Psychedelic Snarl', a compilation from Bam Caruso.  Hearing the tracks on this for the first time was just completely enthralling, everything sounded so good.  Oh I could go on but I'll stop now - this long ramble is really just to explain a little background to the discovery of one of my all-time favourite tracks, as I first heard it on that album: the Open Mind's 'Magic Potion'.   It's the b-side to their second single 'Cast A Spell' (also included on 'The Psychedelic Snarl'), originally released in 1969.  It licks along right from the off...  I love that guitar, those drums... here it is: 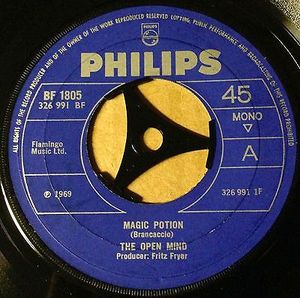 By the way, according to Discogs, a copy of this single sold last November for £850.  I do not own a copy!

Email ThisBlogThis!Share to TwitterShare to FacebookShare to Pinterest
Labels: 1969, magic potion, my bestest most favouritest songs ever ever, open mind, psychedelic snarl

To love a dove 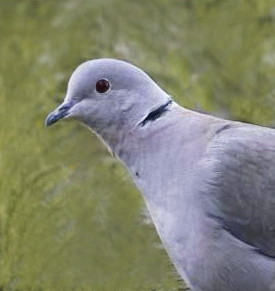 The collared dove that perches outside the kitchen window waiting for me to feed it every morning has become my latest bird 'friend'.  We've been getting to know each other for a couple of years now and whilst I'm used to the tameness of several blackbirds and robins (and even, briefly, as told here, a bluetit), this is the first time a collared dove has shown such trust.

In Greek mythology, a poorly paid, mistreated servant girl prayed to the gods for help and was transformed by them into a collared dove so that she could fly away and escape her misery.  The dove's mournful-sounding cry,  - heard so often as it takes off and lands - is said to recall her former wretched life.  The bird's species name reflects this too: decaocto, meaning eighteen, supposedly comes from the number of coins the maid received each year for her hard work.

In keeping with the myth, they seem such nervous, skittish birds, taking flight at the slightest movement and rarely hanging about near humans, but this one's different.  It knows how to attract my attention and stays around once it has it, often just a few inches away.  Our connection is almost palpable.  It watches me with dark red eyes; I can sense it weighing things up - the way its natural caution is overridden, just enough, by its confidence in getting a prompt handful of food.   It has a mate - they pair for life - but I don't know which one is male and which female.  The mate is more shy, preferring to watch from a safe distance, only coming down to join its partner once I'm far enough away not to pose a threat.  Proof, I believe, that every creature, wild or not, has its own distinct identity; it must be character rather than just instinct alone which dictates some of the decisions it makes.

I even dreamed about my dove the other night!  I found it nestling in the large bin where I keep a sack of sunflower hearts.  I reached down and picked it up, held it in my arms and felt its soft, warm body - it didn't struggle or flap, just stayed snug in my embrace like a kitten.  It was such a vivid dream that the the next morning when it came to me in real life and those dark red eyes met mine, I felt as if we'd shared a secret tryst.

My friend's funeral was held on Thursday.  It was actually a rather wonderful and strangely uplifting event, in the way that these things can sometimes be.  So many people... so much love.  The prevailing conviviality helped a great deal to offset some of the sadness.  As everyone gathered in the bright winter sunshine just before the ceremony, two crows flew up into an adjacent tree and cawed loudly.  Knowing his admiration for these birds, that just seemed perfect.

If there's one regret I have, it's that I didn't spend more time with him when he was well.  We take each other so much for granted, don't we, and it seems there's always a tomorrow.  Still, I must console myself with the thought that whilst I can't help but wish there'd been more of them, at least every single minute that I was lucky enough to have in his company was a joy. 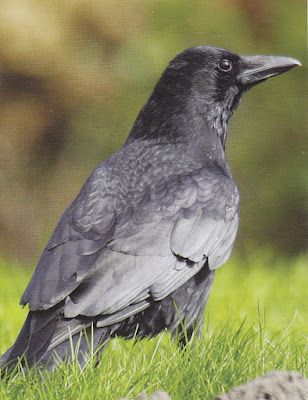 My bestest most favouritest songs ever ever - part 1

I can't do lists... certainly not hierarchical ones, I don't have Top Tens, etc. in anything.  But when it comes to music there are some songs which just endure - which always make me smile and still give me that special feeling.  It's hard to analyse exactly why, isn't it?  - maybe it's about the context as much as anything? - what it aroused in me on hearing for the very first time, where I was, what I was doing, thinking, etc.  Sometimes it's as simple as just having a particular penchant for a heavy bass-line or a hooky chorus, one common element in different and often disparate tracks which always satisfies something inside.  I've been through many phases and into several genres in over 40 years of listening to music (oh jeez) and as with most things in life I don't think you want the same again and again or forever, not the same food nor the same clothes, etc. so that also applies to this  - but there will always be the special examples which just never lose their original appeal.

I'm going to pick out a few here from time to time - expect a very varied selection!

To kick off, it's Modern Politics by The Panik from November 1977 (the first track on their  'It Won't Sell!' EP).   When I first heard this at the time of its release I just couldn't believe the sound of that bass rumbling its way through and I loved its stop-start punctuation, plus the (slightly over-ambitious) guitar solo...  it sounded so serious, so raw, but relatively 'slow' (hmm, sort of) for '77 punk, not too ramalama.  The band came from Manchester and listening to it again now I'm reminded of early Joy Division / Warsaw.  I've just looked them up in the excellent book 'No More Heroes' by Alex Ogg and indeed there is a connection: the record was co-produced by band manager Rob Gretton, plus drummer Steve Brotherdale  also played in Warsaw.  Apparently at one time they even tried to convince Ian Curtis to be The Panik's singer. 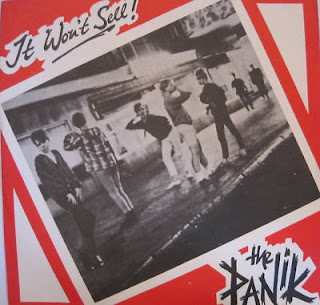 One to blow the cobwebs away - play loud (of course) and feel 14 again, listen here:

Email ThisBlogThis!Share to TwitterShare to FacebookShare to Pinterest
Labels: 1977, modern politics, my bestest most favouritest songs ever ever, punk, the panik

This is still London

I needed a treat.  Thankfully one came in the form of some visual delights, courtesy of this recent purchase. 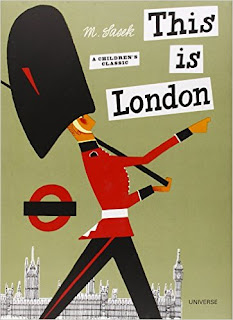 First published in 1959, this is one of a series of successful books created by Miroslav Sasek about cities of the world.  They may have been designed for younger readers but their charm, wit and contemporaneous detail is universally and timelessly appealing.

I sent myself off on a little search to find up-to-date images of some of the subjects featured in these illustrations.

Have things changed much in nearly 60 years? 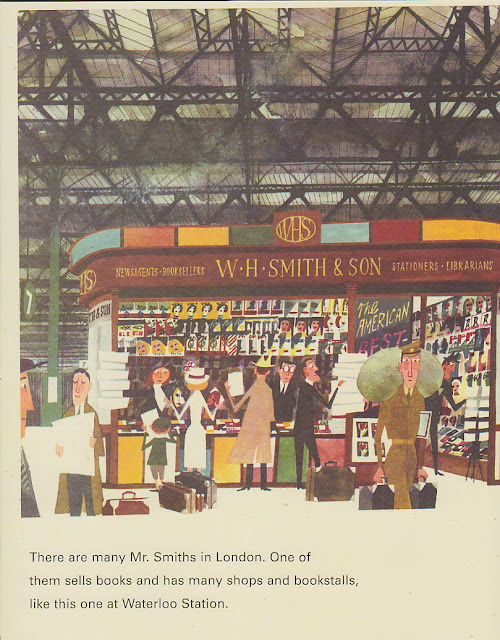 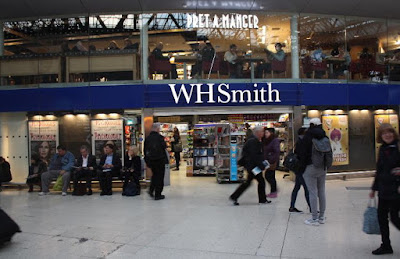 It's quite comforting to notice that not everything has. 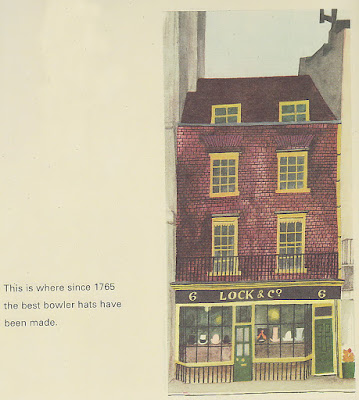 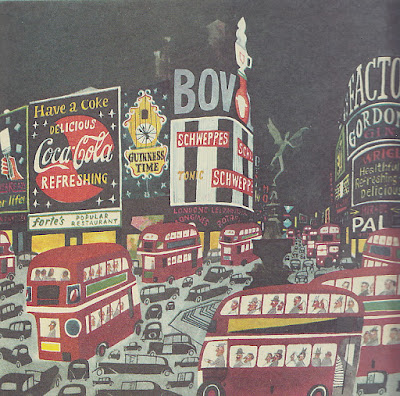 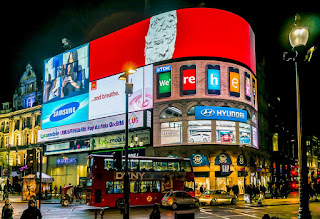 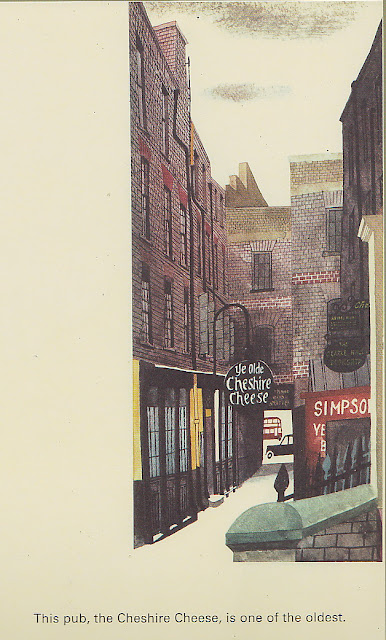 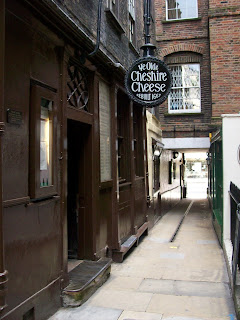 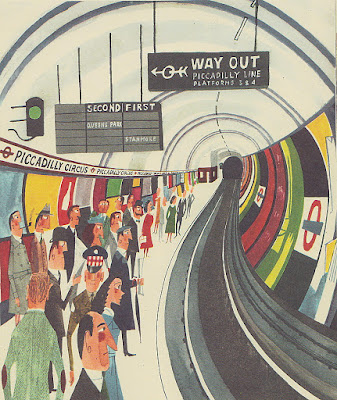 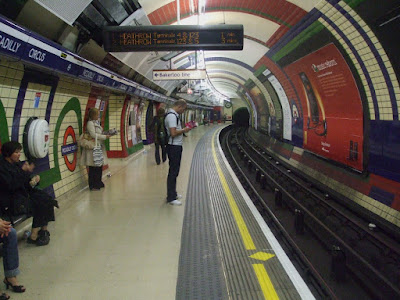 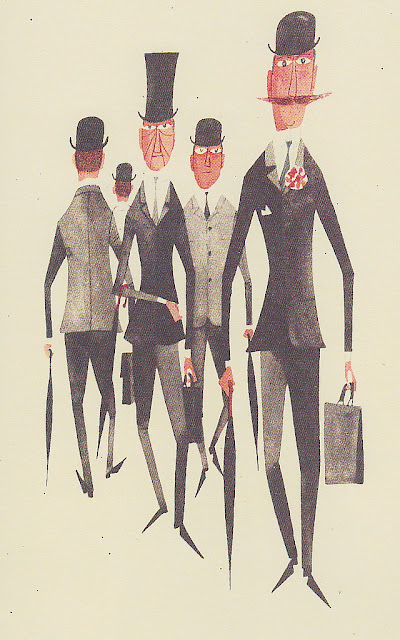 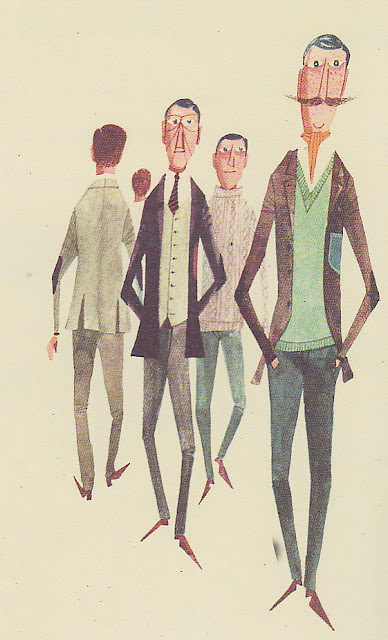 'This Is London' by M Sasek, is available as an updated reprint from Universe Publishing.
Posted by C at 18:35 17 comments: