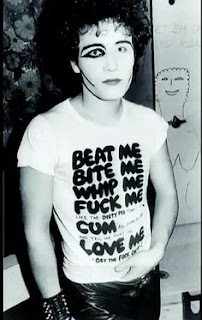 On May 28th 1978 Adam & the Ants were booked to play at my local venue.  I was barely able to contain my excitement when I heard.  It was only five months since I’d been to my first gig, when Siouxsie & the Banshees had played at the same place.  Five months is a long time when you’re 14 and in that interim the venue had become my regular haunt, usually twice a week (depending on the demands of homework).  My three friends and I always went together to watch bands, drink cider and mingle with fellow punk fans.

We felt at home there in a way we rarely did anywhere else; we were all outsiders together.  Mostly punks, a few rock types, a couple of hippies and one or two general oddballs.  The club occasionally played host to artists who were not too well-known to overcrowd its intimate small-town setting, but were established or culty enough to have made it into the music papers or perhaps recorded sessions for John Peel.  Bands like Adam & the Ants who, in spite of not even having recorded their first single yet, had gained an underground following I’d read about.

And they were coming to my town!  Presumably with Jordan – the embodiment of London art punk outrageousness, the most outstanding looking woman I’d seen in the whole of this brave new underworld  - I was in awe.

But my friends couldn’t come that night.  At fourteen, and female, was I brave enough to go on my own and spend the whole evening there without them?

“Well we’re going down to the Jazz Club later, so you can come home with us,” my mum said – meaning that she and my dad would be in the adjacent bar for the latter part of the night and my lift home was assured.  It was a deal.  (I was deprived of any excuse to rebel against them - they were too liberal!)

It was a warm, light evening as  I walked across town on my own, then waited nervously outside the door to get in, along with some unfamiliar faces who’d clearly come down from London - but the queue wasn’t as big as I’d expected.  And then I noticed the hand-written sign and overheard the conversation filtering through the line:  Adam & the Ants had cancelled.

So on this date 40 years ago I didn't actually see Adam & the Ants, or Jordan.  I saw The Automatics on my own instead.  Regulars at the Marquee and with a vocalist who'd briefly been a member of the Boys beforehand,  they were pretty good (listening to them again now, they sound quite power pop too).  And being on my own had its advantages;  I got chatted up by the guitarist from a local band who was also there on his own, a bloke a fair bit older than me, about 20.

“Beer”, I replied helpfully, thinking myself very grown up.

And then we stood together with our drinks, hardly able to talk above the noise.  I think the ‘beer’ went to my head a bit, because it wasn’t long before I turned round and kissed him full on the lips. Well, he looked like Mick Jones.  I think I took him a little by surprise.

When the evening ended, it was a little awkward, as I had to wait for my parents, which didn’t seem very cool.  But ‘Mick Jones’ and me said lovely if slightly clumsy goodbyes and, even without Adam & The Ants, I’d had a great evening.  Then I waited there in the foyer alone, as the last few people filed out of the hall.  A great big older punk bloke whom I’d never seen before – a Londoner, I think, maybe he'd been part of the Automatics' entourage – stopped and looked at me.

“Do you wanna fuck?”  he asked, just like that.  Straight to the point.

I don’t think he was too chuffed when I said a polite “No thank you”, trying not to show my disbelief.

With that, he called me a “boiler” and marched out the door – just before my mum and dad appeared and drove me home - I didn't tell them.

It felt like I’d grown up pretty fast that night.

Adam & The Ants did come to my town in the end – in March the following year, six months before the release of  Dirk Wears White Sox.; they were great.  And I stood and watched them with the bloke who’d bought me that pint, as we'd been going out together for 2 weeks.


The Automatics: When The Tanks Roll Over Poland Again b/w Watch Her
1978

Email ThisBlogThis!Share to TwitterShare to FacebookShare to Pinterest
Labels: 1978, adam and the ants, anniversary snapshots, punk, the automatics

Look through any window

A very quick visual post today as the result of an afternoon out with friends yesterday.  Our outing included, but was not limited to, some of my favourite things: sunshine, spotty pigs, peacocks (elegantly named Dave and Steve), gargoyles, olde stuffe, a maze, beehives and macaroni cheese.  All in the same place too, just five minutes' walk from my home, but where I've never before ventured beyond the gates.  I've just looked through the bars longingly, many times, like a child pressing her nose against the toy shop window. Sometimes, ironically, places of interest are so nearby that you simply don't take advantage of them. "Oh, but I can go there any time," you think, and as a result you don't.

Anyway, yesterday I did, and took quite a few pics, including some of the spotty pigs and Dave, or was it Steve?  I merely ate the macaroni cheese.  We saw bees chasing a gardener (they didn't like the vibrations of the lawnmower, apparently) and fed the carp in the moat.  Of all the many beautiful, ancient and quirky sights we enjoyed, though, there was another favourite thing - or perhaps theme -  that kept catching my eye, all within this one location. What is is it about old and often tatty doors and windows that I find so appealing?  Something mysterious perhaps - and the idea that they are portals, that so many people have passed through or peered through them, over decades - or centuries.   I'm glad that now includes me. 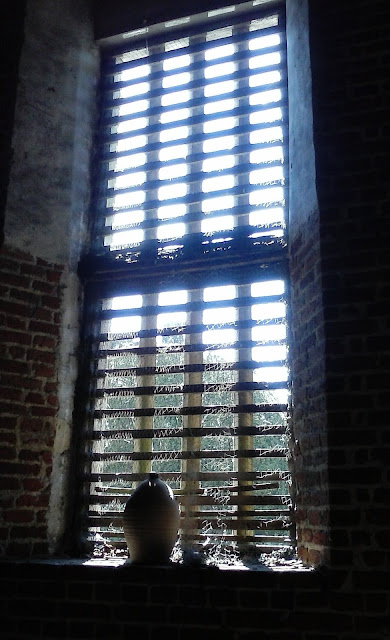 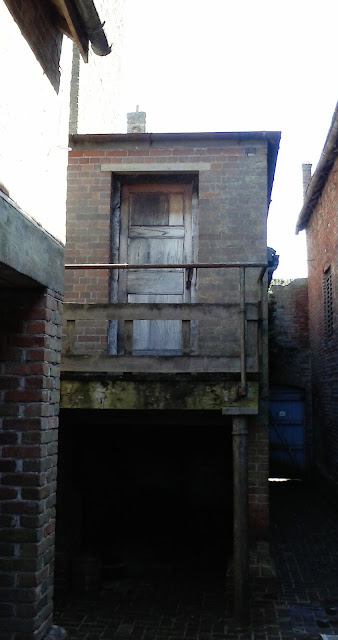 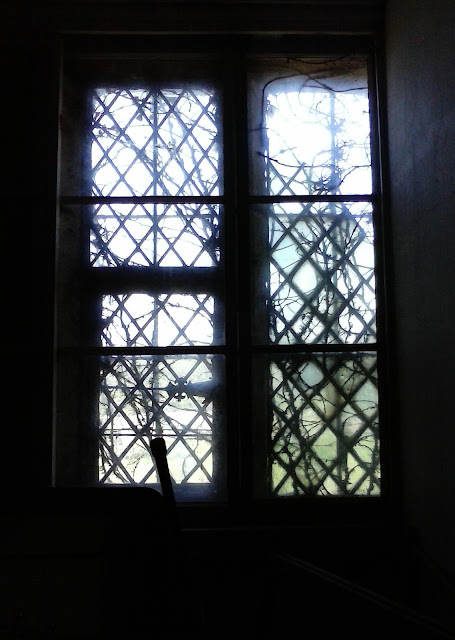 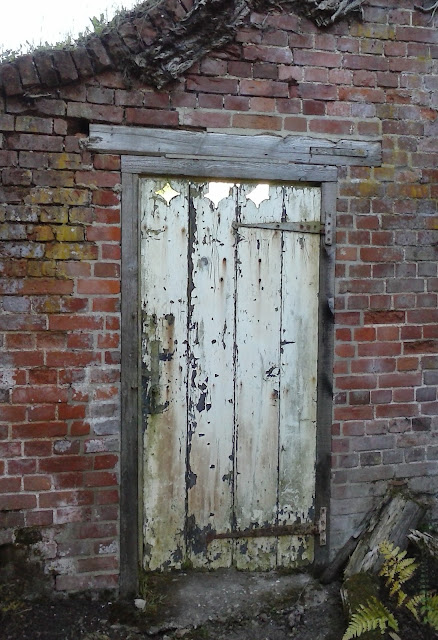 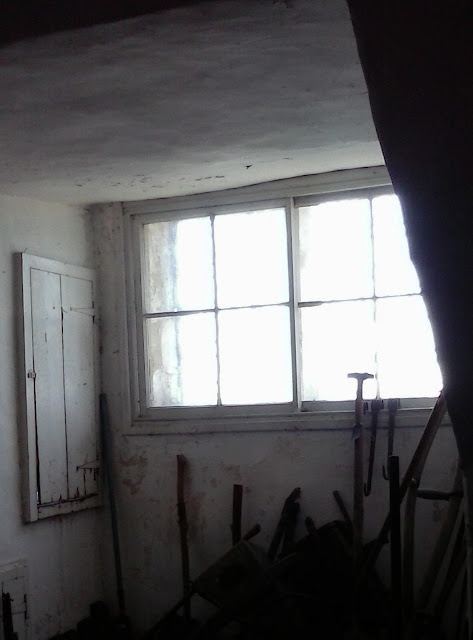 (Inside the high, creepy attic - which easily fitted the
criteria for this)
Posted by C at 09:02 18 comments: