It really did sound as if he was having sex in our bathroom.

Keith The Carpet Fitter was in there on his knees with a bucket of latex. There was a lot of grunting and some shockingly loud sighs and groans. I felt quite embarrassed at his oral exertions; I had to keep stopping my mind going to places that I knew it really didn't want to go to, a bit like when you see Robin Trower make his facial contortions... you know what I'm saying.  There was a final, triumphant “Yesss!” as he crawled backwards out of the bathroom, then one more deep grunt as he stood up, before beckoning me to show off his handiwork which was (well of course) the levelling screed he'd just laid on the concrete floor.  I was quite relieved.

Mind you, when it comes to making involuntary noises, it could just as easily have been me using one of these. 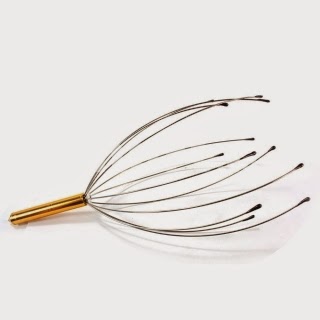 Have you ever tried one?  Oh god, I recommend it.  It's best when someone else uses it on you, but still pretty damned amazing if you do it to yourself. Your skin will tingle in ways you didn't know were possible, your eyes glaze over in ecstasy and you may well find yourself begging for more more more you filthy whore. You may also make a noise like Keith and pull a face like Robin so it's probably best not to whip it out of your handbag or manbag and have a quickie with it in Tescos.  Although... if everybody did that it would certainly make shopping for spaghetti hoops a very different experience.  Who'd have thought your head could be so erogenous?