David Bowie and the Spiders from Malaysia 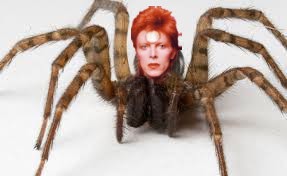 You know I love spiders – please bear with me here – I know not everyone does. Seems I've had more than the usual number of close encounters lately; is this telling me something? But what? Yesterday I found the biggest one ever and it seemed particularly, spectacularly, legful. I swear I counted nine. And I counted them twice. But by the time I'd come back with my camera it had, of course, literally legged it. I also found a huge, lifeless one at the bottom of the birdbath this morning, fished it out and left it on a leaf to dry in the sun hoping that it might somehow survive. Five, five, hours later it was up and running about - you have to be patient bringing spiders back from the dead*. Federica (or her successor) is back in residence too.

Anyway, please forgive me the arachnid indulgence; I really just wanted to mention David Bowie. I just found out, whilst researching the possibility of nine-legged beasties (I know) that there is a davidbowie spider. It's large, yellow-haired and endangered.  Say what you like.  When it was newly discovered in Malaysia in 2009 it was named after him to raise awareness of threatened species. There's a neilyoungi too!  Whoever next?