I was at the dentist yesterday and found myself reflecting on what a different experience it is now to that of forty years ago. Society's ever-increasing obsession with the 'perfect' appearance generally troubles me, but at least it's done our mouths a favour. In the pursuit of a smile so bright white it could compete with car headlights in a 'Dazzle the Rabbits' competition, and jaws so immaculately regular you could name a well-known Blondie album after them (and I don't mean Eat To The Beat), people are taking more care of their choppers. (Phew, that was a long sentence...) It's even happening here where we are famed, in the most uncomplimentary way, for our 'English Teeth'.  Dental clinics have become dental 'emporiums' and the one I go to now has a name that sounds more like a cocktail lounge than anything remotely medical.

As a typical child growing up in '70s Britain, an essential part of my daily diet was sugar, and it was usually taken two to three times a week in concentrated Spangles, Milky Way and Sherbet Pip form. It provided just the right amount of hyperactivity for important pursuits like French Skipping, but my teeth fared less well and by the time I was twelve my open mouth boasted an impressive display of silvery amalgam fillings. Then, just when I was at my most self-conscious, I had to wear two dental braces - simultaneously.  I could set off metal detectors three streets away with ease, but speaking and eating required supreme effort.

The local dental surgery was a familiar place for all the wrong reasons, so my mum used to make each ordeal a little more bearable by promising a small present on the way home. Once she'd wiped the dribble from my chin, she'd take me down to my favourite shop, Pearman & Blacker, where the delights on its many racks and displays let me temporarily forget the fuzzy sensation in my cheek or an aching jaw. No, it wasn't a sweet shop; that would have just been in bad taste. It was a bookshop.  That smell of paper-and-printing-ink overrode the essence of antiseptic in my nostrils, the crisp covers promised magic carpet rides to lands where dentists didn't exist.

I have mercury fillings, corrective braces, extractions, anaesthetics and injections to thank for the shelves in my childhood bedroom becoming filled with Puffins and other paperbacks. Mrs Pepperpot, Five Children and It, the Moomins, Spike Milligan's Milliganimals, the Children of Green Knowe and even the Wombles all came into my life via my teeth. Fortunately those frequent trips to the dentist mean they are stronger and straighter now, but I'm very glad the legacy of a '70s childhood was so much more than just the tooth decay. 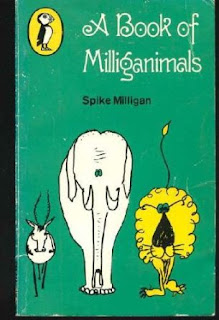