You're not easily offended, are you, right?  So you won't mind me posting this pic of a vinyl sticker that a kind friend gave to us a while back.  (I know, other people get flowers and chocolates...) 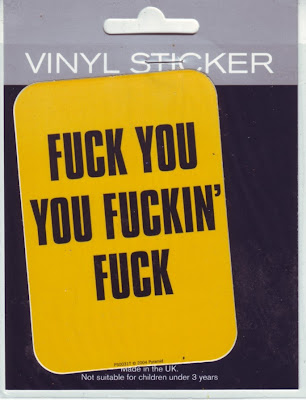 (Notice the 'not suitable for children under 3 years'...)

We laughed and said, "Thank you very much", then put it in the drawer, along with all the other random things that we 'might use one day'.  Although, this was one thing that I hoped we wouldn't need to.  I mean, where would you stick such a thing?

So... on Tuesday I was checking my bank statement and discovered that someone had stolen money from my account.  Five times - in one day.  I've no idea quite how - had they hacked into my card details online? - have I been caught out at a dodgy cashpoint? - it's still a mystery.  Not the end of the world but a pain in the arse having to make the necessary phone calls, fill out fraud/crime forms, cancel my card and wait for a new one.  I know it's not personal but it still feels like a form of violation.  I've been physically burgled before (like many people, I'm sure), which feels a lot more traumatic - but still there is something about the calculated sophistication of this type of theft which is troubling.  And who else are they doing it to?  Perhaps someone who is already vulnerable, stressed or struggling? Bastards!

At least now I know exactly where I could stick that sticker.

(I'm still limping on with my old computer, squeezing every last drop from it while I wait to get a new one... creak, creak, whirr, whirr...)