Aargh, I’m feeling very sorry for myself.  I’m on antibiotics and painkillers, thanks to a nasty infection inside one of my cheeks (apparently the culprit is likely a cracked tooth).  The right side of my face now resembles a cross between a Cabbage Patch doll and a chipmunk.... all swollen as if I’m storing nuts in it for the Winter, skin shiny and stretched like an overblown balloon - it’s not a good look. 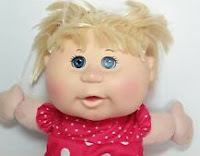 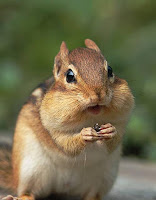 And it hurts and I’m tired and and antiobiotics bring you down, don’t they?  So what do you do when you feel like shit?  You find yourself irresistibly drawn to tacky 1960s so-bad-they're-good sci-fi films ...

Thank goodness for ‘The Terrornauts’ being aired on the charming ‘Talking Pictures TV' channel earlier today.  I’ve caught quite a few gems (I almost typed ‘germs’ then, how apt) on this station, I get hooked in quite easily by anything from the ‘30s and ‘40s for instance, often with wooden acting and those strange clipped British accents that no longer exist.  And the outdated language – those frightful scoundrels!   I’m mesmerised by the décor in the houses (they can make me feel quite funny, as if I’ve been there in a previous life).  Ancient city sequences do it too – the sit-up-and-beg cars trundling down half-empty streets and thin people in hats and coats looking in Georgian-glazed shop windows, or those heady bucolic scenes where the birdsong is overpowering and you can almost smell the blossom, even in black-and-white.  Frequently the stories in these films come second, I just like immersing myself in their atmosphere.

1960s films are natural favourites too;  style and fashion and subject matters often more resonant, some evoking my own ‘60s early childhood – and movies featuring bands or groovy soundtracks are of special interest of course.   But there’s nothing quite like the ambitious yet amateurish props and op-art sets of 1960s sci-fi to soothe a sore face. 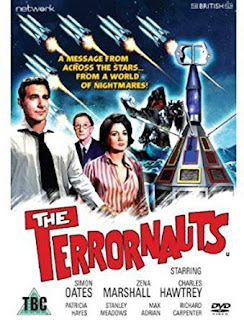 His sidekicks were a somewhat mixed bunch including Charles Hawtrey , immediately bringing to mind the Carry On films, and Patricia Hayes, whose comically prosaic lines delivered in characteristic Cockney accent didn’t disappoint.    I love the way some people  can be abducted and transported through outer space in the middle of the night and yet they never panic...

As hoped, and expected, there were plenty of kitchen implements too disguised as spacecraft, swimming cap headwear with wires attached (that our heroes plugged into funnels on top of boxes through which ‘knowledge’ could be transferred to their brains), a feathery sort of monster with tentacles, one crab claw and a juddering (cardboard?) eye on its side worthy of any small child’s drawing, and some nasty alien ‘savages’ with green skin wielding spears, whose thirst for (female, of course) sacrifice put actress Zena Marshall’s life in danger...  sort of. 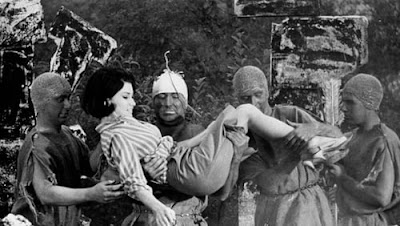 
Just the tonic I need, especially as I'm looking and feeling like I've been invaded by aliens myself right now.  Pass the penicillin...!
Posted by C at 14:00