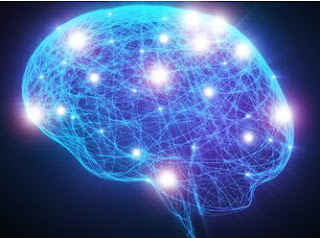 I’m sure it used to sizzle and spark and fizzle and twitch, that it flickered and flashed far more quickly and frequently than it does now.  To be honest, now it feels somewhat flaccid – flabby, even.  I need to find a way to fire it right up again and push it to its full potential.

Even writing this seems to take more effort than it used to.  I sort of splutter now... I used to be more fluid, I’m sure, with ideas and thoughts almost falling over themselves to get out and onto the page, vocabulary vying for attention, sometimes a little wit (hopefully) teasing at the edges.  Is it just age, or lack of practice, or even lack of discipline, that slowly starts to erode our faculties?  Do our brains get full after so many years absorbing everything and take it upon themselves to do a bit of arbitrary weeding?  If so, I think mine has accidentally chucked out some of my more exotic blooms.   Perhaps it’s a combination of all these factors.  I’m in awe at my younger self soaking up so much in those early educational years because it was just what you did - even with all those growing up distractions like hula-hoops, The Banana Splits and boys.  Now I wonder how the hell did I manage to switch between understanding topography one minute to memorising the conditional tense in French the next?  Then go home and listen to the Clash’s first album and remember every single word in the lyrics too...

Of course, I don’t want a flabby floppy brain!  I reckon it needs a good work-out.  I want its cells to flash like fireworks, each spark igniting another until my head practically lights up with mental energy so that I can subtract 57 from 124 without breaking into a sweat and remember the name of that actor who was in that film which had that scene with that curly-haired man who was in that programme called...oh.... (definitely having more of a problem remembering names than ever).    I even bought a book once, ‘The Memory Booster Workout’, but I keep forgetting to look at it....(ba-dum tish).   In fact I feel like my brain needs a good kick up the arse, if you see what I mean.

But there is hope!   Recent research has shown it IS possible to grow new brain cells throughout our lives and keep things changing more positively.  So maybe it's worth making a concerted effort to buff up those weaker zones, and this is why I decided yesterday, albeit with a certain degree of trepidation, to put myself through the rather grandly named  ‘Great British Intelligence Test’.  Ooh!

I won’t give anything away, except to say that if you fancy doing the same it’s quite good fun in a strangely masochistic kind of way and I felt quite reassured by the results, as well as getting some insights, which isn’t a bad way to start off a new year (if you ignore the state of the world, political landscape, climate crisis, etc....)

However, my brain does still need a kick up the arse.

Read more here , test your brain power too and your results will contribute to further research (you don’t have to be UK citizen to participate).