Abstract moment of the week #11

I was so tempted to call this post ‘Just Another Phallic Monday’… but that might have suggested it was going to be the start of a new series and I’m not sure if I could, erm, keep it up.  However I can’t resist mentioning this once because it's tickled me...

I had coffee with a friend the other day who is not long back from a fantastic trip to Bhutan.  I know very little about Bhutan, but it sounds like a fascinating, peaceful and unusual place. Talking to my friend is always an education when it comes to travel.  I enjoyed looking at his photos of the dramatic mountainous scenery, people in national costume, the beautiful wildlife, and then he explained how there was so much decorative art everywhere, intricate carvings and detailed embellishment in the architecture, etc.  – all the things you might perhaps expect from a remote kingdom deep in the Himalayas.

What I hadn't expected, though, was to hear about the proliferation of imagery of a particular fertility symbol which here in the West we tend only to see scrawled on public toilet walls and concrete underpasses by less accomplished artists before being hurriedly removed by the authorities….   In Bhutan, however, it is normal to have it painted with great skill and finesse on the outside of your house, without embarrassment or censure, to bring good luck and protection.

I have to say, I do rather like the way they embrace it!  But I don't think my local council would approve if I did the same. 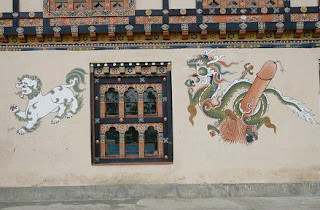 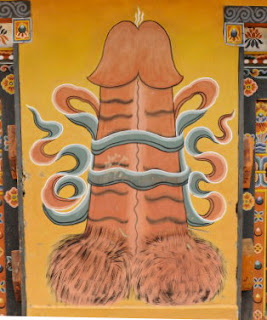 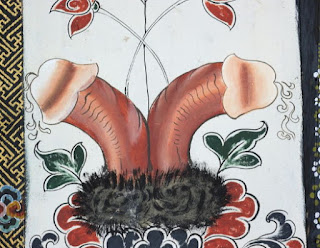 Email ThisBlogThis!Share to TwitterShare to FacebookShare to Pinterest
Labels: abstract moment of the week, art