Art and music are great therapy, aren't they?  So what better reason to write a bit more in the coming weeks on two of my favourite subjects and try to keep this blog alive and kicking while many will no doubt be joining me in the working-from-home ranks.  To help get me back into it I revisited some old series that I'd started on here long ago (seeing as I never seem to get past 2 or 3 'editions'), and one that sprang to mind recently (thanks to watching Jim Moir aka Vic Reeves' brilliant documentary about the Bauhaus art movement) was a tribute to my days studying art and design at college.  There was so much going on musically too.  More soon if I can get my act together, but in the meantime I hope you won't mind some repetition from several years back, just to get things flowing again. 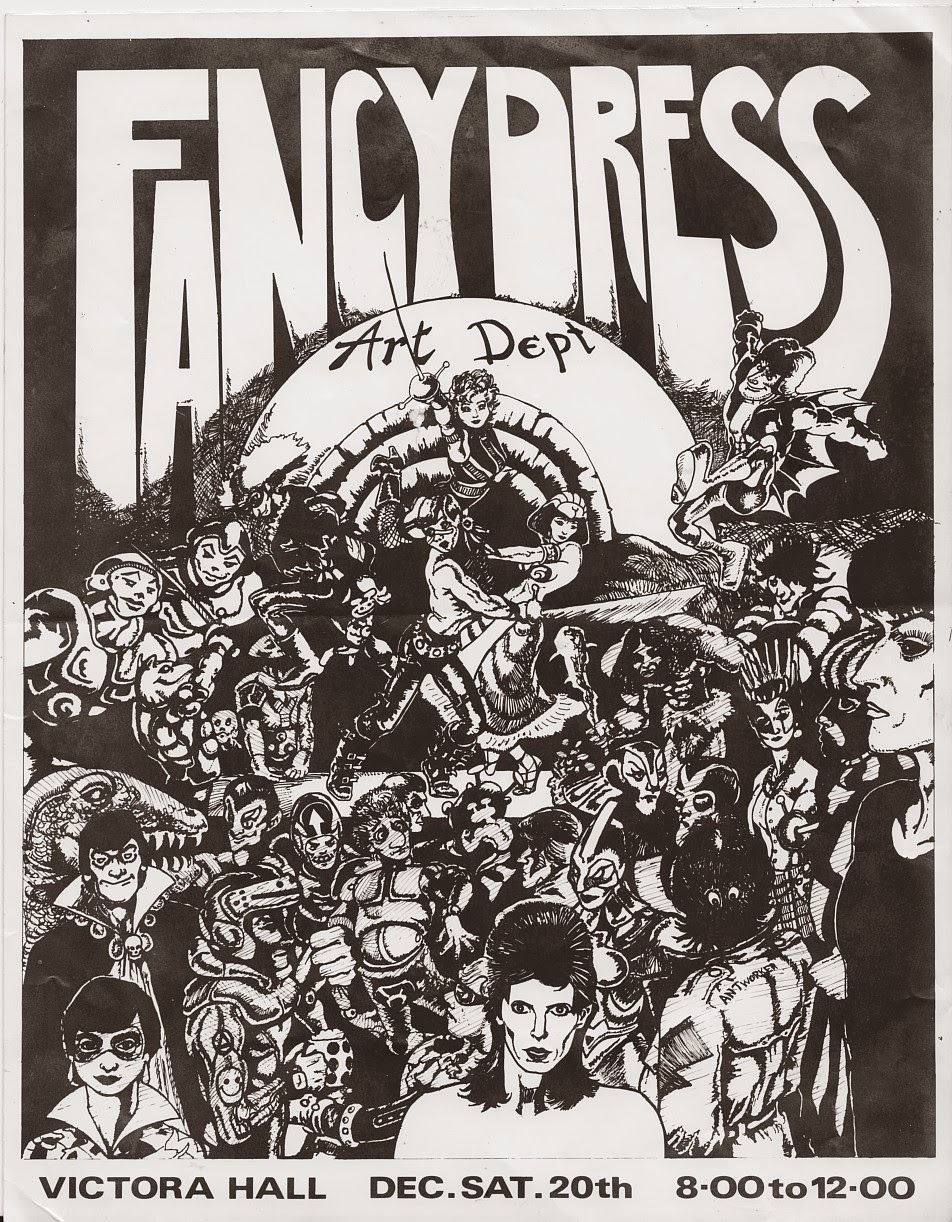 Much as I would love to claim to be the artist behind this poster, all credit must go to Simon, who was in the year above me at college and designed and drew this for a party in 1980. (If you should happen to stumble upon this, Simon, then I hope you won't mind me reproducing it here. I also hope you're still drawing!)   I think it's a great piece of graphic illustration, especially considering he was only 18 when he created it.

I've kept it for all these years because, much to my great surprise at the time, a good friend and I were immortalised in it. That's me, apparently, top centre, wearing fishnets and brandishing a cutlass, showing more feistiness (and flesh) than I think I ever did in real life. My beautiful college mate is nearby looking suitably sultry in a Cleopatra get-up. There are one or two others in the crowd which are wonderful caricatures of our fellow students, and I like the fact that Bowie and Jordan (the original) have made a guest appearance in the pic; sadly they never made one at college. All in all it kind of sums up 1980 art school life for me.

Even though I didn't make it to the actual party (I can't remember why), I can probably tell you fairly accurately what would have been played there. Musically 1980 had some interesting things to offer. A quick look at the year's indie charts reveals that the best-selling bands included acts as diverse as Dead Kennedys, Spizzenergi, Joy Division and Crass but in December's UK Top 40 you could hear Abba one minute and AC/DC the next, not forgetting singles by ELO, Kate Bush, Clash, Madness, Spandau Ballet, oh and... St Winifred's School Choir... what an odd mixture.  That month, John Peel aired sessions by the Raincoats, Theatre of Hate and Red Beat.

The murder of John Lennon just a couple of weeks before this party was shocking but, you know, I remember it didn't really touch me in any significant way at the time – unlike the deaths of Malcolm Owen and Ian Curtis earlier that same year.