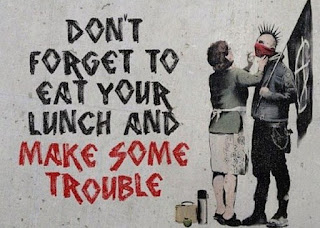 There have been a few snippets of conversation in this blogging corner recently about travelling with bands.  I did my little stint of it in the early ‘80s because my boyfriend was the guitarist in an anarcho-punk band, and the other day I happened to mention in a comment over at My Top Ten a particular memory from when I joined them on a mini-tour.

There we all were at the end of this little trip around various dingy dives scattered about the UK: four band members, four girlfriends and the 'roadie', sitting in a motorway service station a long way from home, hungry and miserable as hell.  Surely it shouldn't be like this?!  But it was.  We pooled what little cash we had between us - like the sticky twopence pieces you find in those fluffy far corners of inner pockets - to see if we could afford a few buns.  Maybe a chocolate muffin.  But we didn't have enough for more than a crappy cup of tea.  It was desperate - so desperate - the vocalist had a little cry.

And the stupid thing was that we were on our way back home and it wasn't like we didn't have money there.  Or warm beds and clean socks.  It was the tension that caused the tears. Being cramped up with other people for too long.  Sleeping on floors.  Inhaling exhaust fumes and the communal breath of strangers in unfamiliar venues.  The waiting about, so much waiting.  All those things add up.


Is it time to serialise some of those recollections here?  Not being a band member, my perspective may be different too -  I observed things, I felt things, I didn't have to perform.  Whilst I don't have diaries, I do have memories, so maybe I ought to jot a few down before they fade?  As I'm sure most people can say about certain periods in their life, there's almost a book just waiting to be written.  Or a sitcom -  one in which I could also explain the 'leek pie' reference in the title above.... (I will!)

Anyway, while I think about that, I remember that I'd written a post some years ago (slightly edited here, but apologies if you've seen it before) which might serve to kick-start some more.  And if it does, then please think of this as the introduction...!

Do you have any tales from the tour bus?  I'd love to hear them.

A smell of stale cigarette smoke lingers in the stingingly cold night air. The floor of the back of the transit van where I sit feels icy, even through my trousers. My back hurts, leaning against something hard and unyielding, its corner poking into my shoulder.

There are seven of us in the back of this metal box, trying to ‘snuggle’ down between amps, drums, guitar cases, backdrops and bags of leads and pedals, behind the cab, hoping to catch some sleep as the vehicle rumbles monotonously down the motorway in the bleak early hours of a winter morning.

Along with band members and the other girlfriends is another passenger - a stranger.  He's a ‘fan’ who is cadging a lift back home after the gig. Whilst packing up at the end of the night - always a long-winded business - he’d hung about and asked, “Any chance of dropping me off in Hull?"   With the band’s badges on his lapel glinting in the streetlights, the bass player and self-appointed spokesman for the group couldn't refuse. Never mind that this detour takes us an hour out of our way home and it feels like an eternity when we’ve got another 120 miles to go. But this often seems to happen; there's always someone in the van travelling back who hasn’t travelled out with us, and usually it’s someone who smells strongly of sweat and dope and farts, with limbs that are far too long and a bulky rucksack, taking up precious space and time. And space and time mean more than anything on the home-bound stretch, because everyone is knackered, hungry, dehydrated, cold, squashed up and grumpy. Everyone just wants to get home, longing for deep sleep in a warm, soft, bed.

For a while this became quite a frequent thing for me as I travelled with the band to venues up and down the country. We usually tried to get back the same night, which in reality meant arriving home just as the sun was coming up.  When we stayed over somewhere, there was no nice comfy hotel or motel.  This was anarcho-punk, after all!  So instead there was the damp squat in Bath – a condemned terraced house with no plumbing, and the floor of a tiny council flat in a high rise in St. Helens, which did have plumbing but, by strange coincidence, a broken toilet.

My memories of those days are a melange of odd moments and images. From being stopped and searched by the Mets as we travelled home through South London, to seeing a cow giving birth as we ventured through the Cumbrian hills on the way to a gig near Windscale nuclear plant. From hearing rumours that skinheads were going to throw meat (!) on stage at Grimsby (they didn’t), to paddling in the sea before a gig in Fareham. And there was the Gizzard Puke-styled punk in Burnley who was ‘wearing’ a condom attached to his face between safety pins (one in his lip, one in his nose. It was quite a look.) It turned out he was the singer in one of the support bands, whose only memorable number was a re-worded demolition of Eddie Cochran’s ‘C’mon Everybody’ endearingly entitled ‘Fuck Off Everybody’.

I remember the inter-band arguments, oh yes, plenty of them.  And the seemingly endless soundchecks, the listening in on fanzine interviews, and the way only Northern punks sported moustaches… Strangely enough, perhaps, the thing I probably remember the least about is the performances. They were good, though.  Of course.