...I keep on walking.  It's around the next corner. 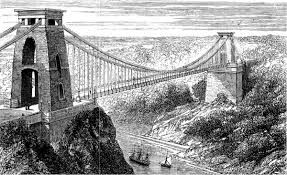 I'm enthralled by Brunel's elegant structure. It's currently undergoing work; on my side here the brickwork is draped in green tarpaulin and scaffolding and I can't seem to get a great photo - but never mind, just seeing it is enough.  I think it's beautiful. 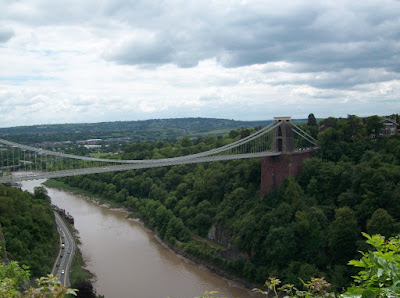 The drama of the Avon Gorge makes me feel momentarily breathless for the second time today.  And everything else around here, big and small, is a joy to witness: the water, the views, the wild flowers, a friendly cat even (what's it doing up here?) and a blaze of fluorescent yellow as some miniature hi-vis jackets gather in the distance, worn by a troop of tiny schoolchildren.  (Either that or it's a gang of vertically-challenged scaffolders.)

I stop walking and just look for a while.  My camera seems redundant.

On the way back I get lost – I was going to say 'slightly' lost, but surely you're either lost or you're not?! - and meander the tranquil residential roads of Clifton (I think) in completely the wrong direction(s), not that it really matters.  I have the navigational prowess of a concussed butterfly.

But once I get back on track (the friendly couple who are pruning a tree and whom I ask for advice suggest I keep the sun on my right hand side, and it works) I recognise Queen's Road. 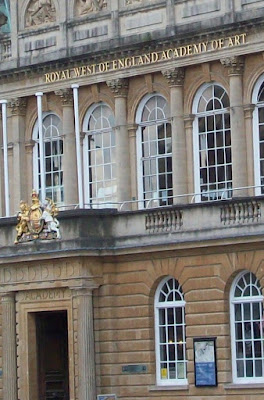 Here I stop off at the Royal West of England Academy of Art but it's being refurbished, so there's only one small room of drawings on show. Still, I enjoy them... as well as coffee and a slice of cake (orange and frangipane, since you ask).

I've been out for nearly four hours and decide to head back to the harbourside.  Outside the Arnolfini Gallery (also being refurbished - it's not my week!) I'm approached by three men, mid-thirties probably. Two with beards (of course, seeing as nearly every man in his thirties has a beard), one clean-shaven with floppy hair. They have intelligent faces, friendly smiles and, hmm...  a film camera and sound equipment...

Don't know what gets into me when I travel alone but it seems I'm up for anything. Well, almost.