After including the lobster card in the previous post I decided to do a bit of research. It turns out that the lobster pictured was, as the caption said: 'the most famous of all the shellfish'. He was adopted at the age of three months by the recently widowed Mrs Jeffers who emigrated from Maine to the small seaside town of Mudeford in the UK in 1979. She and her worldly goods travelled over by ship specifically so that she could take Simeon (as she called him) with her; in fact a specially adapted lobster pot was suspended from the ship's deck for the duration of the journey so that her pet crustacean could enjoy the homely pleasures of the Atlantic waters en route.

On settling down in their new surroundings in England, Mrs Jeffers and her lobster became enthusiastic members of the local Bridge Club and Simeon gained some notoriety after being taught to play 'Bourrée' on a miniature descant recorder. He was even featured performing this to an enraptured Sue Lawley on BBC 'Nationwide' some time in 1981 but sadly no footage of this exists.

However, his story doesn't have a happy ending. Mrs Jeffers started a relationship with a local electrician who by all accounts was a bit of a cad. Jealous of the obvious affection between Simeon and his owner, he said he was going out to get a fish'n'chip supper one evening and whilst Mrs J was bringing in the washing he surreptitiously placed Simeon in a Tesco bag and took him with him to 'Oh My Cod' where witnesses say he was greeted very warmly.  Simeon was never seen again and we can only assume the terrible thing that must have happened to him that fateful night.

But of course you can't believe everything you read on the web (not even on this blog).  I mean, it is with some incredulity that I read about the 19th century French poet Gérard de Nerval who apparently had a pet lobster called Thibault that he took out on a leash to walk on the Parisian streets. This is, unsurprisingly, a little better known than the tale above and you can read more about it here

Apparently you can keep lobsters as pets if you have them in an aquarium and they're quite easy to please in spite of their grumpy demeanour, eating a variety of foods and generally loafing about all day.  A piece of lobster trivia: they can amputate their own claws, legs and antennae if need be to get out of a dangerous situation, and grow them back. Kind of makes the idea of playing a miniature descant recorder a little less ridiculous.

Ridiculous or not, depending on your taste, is Salvador Dali's Lobster Telephone (aka Aphrodisiac Telephone) which he created in 1936.   Lobsters and telephones were sexually symbolic in Dali's work.  I know you already know what it looks like but, go on, have another peek...

Back in the groovy early '70s my mum's favourite piece of furniture was a 'lobster pot' stool made out of wicker. It looked like this: 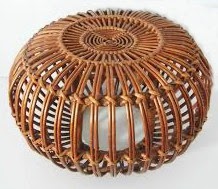 As I'm sure you can imagine it went very well with the macramé wall hangings in our house.  I loved that stool.

I can't have a lobster pot stool or a lobster aquarium or a lobster telephone but I would happily indulge my lobster love with this dress: 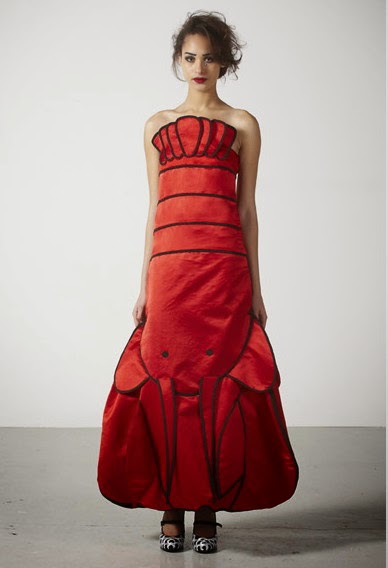 This was created a few years ago by the label The Rodnik Band which has wonderful pop art inspirations and I must admit I'm rather taken with it.  I'd be more likely to wear it than this other outfit of theirs – although I applaud the 'presence' of  'pubic hair' and I'd be curious to see the reactions it could provoke. Especially if accessorised with a lobster on a leash.... 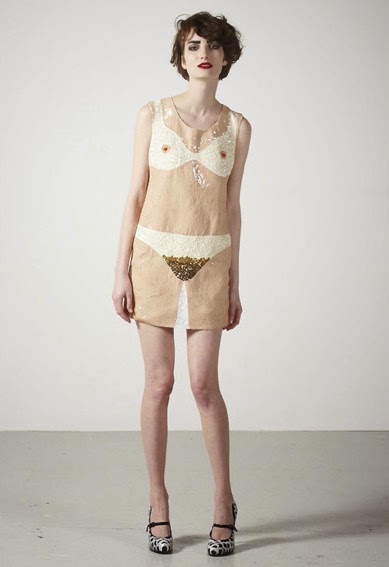 Email ThisBlogThis!Share to TwitterShare to FacebookShare to Pinterest
Labels: b52s, fashion, gerard de nerval, i might be making some of this up, lobsters, rock lobster