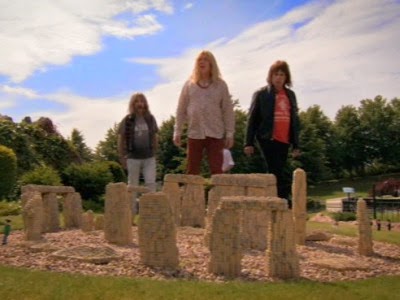 Last night, after flicking idly through the TV channels, we ended up unintentionally watching the BBC2 documentary, a Culture Show Special, 'The Battle For Stonehenge'.   I was totally engaged from the off and so pleased I saw it all.

Stonehenge is just one of those places, so fascinating for obvious reasons, but so easy to take for granted, especially perhaps for a Briton.  I've driven past it many times on the A303 on the way to Devon and Cornwall and was also taken there as a young child in the days when you could wander around freely with your crisps and a bottle of Cresta.   I even went to the Free Festival there in 1979 when Mr SDS' original band were booked to play a support slot  and a group of us travelled down. I remember I wore my pink drainpipes. I also remember the heavy atmosphere, the Hell's Angels, the rumours about bikers carrying knives and unruly, unsupervised kids appearing out of nowhere to clamber over the van like monkeys in a wildlife park, rummaging through our bags. When the so-called schedule got so far behind that the band ended up not playing after all, we drove back grumpily and hungrily through the early hours, stopping in London to try and sleep, cramped together like kippers on someone's tiny floor after drinking a cup of something cold and gritty masquerading as tea. I was only 15 and was supposed to have been delivered home safely that same night, but had to ring my parents and explain that I was staying in a strange flat in Stoke Newington instead...

But back to the programme: I learned so much – and I love it when you find out about things without even trying and without even realising you were that interested in the first place. For instance, I had no idea that Stonehenge had ever been privately owned, nor who by. It was also fascinating to see the carved 'graffiti' that was already hundreds of years old on some of the stones - I love these reminders that people are pretty much the same throughout history, unable to resist the chance to leave their mark somewhere. There was even an unexpected clip of Marc Bolan from some film or documentary that I've no recollection of ever seeing before.  And, as you probably would expect, there was also a bit of background to the whole Druid thing, and if you could bear to witness the rainbow coloured garments, white person dreadlocks, beards and tribal drumming long enough (I confess I have an innate aversion) an interesting insight to the ongoing traditions of a spiritual nature and some associated political wrangles.

Talking of political wrangles, perhaps the most moving part of this programme was the footage and personal account from the infamous 'Battle of the Beanfield'. Whilst I remembered seeing the news about it at the time, I was still horrified and shocked all these years later at the level of police brutality and the underhand tactics they deployed.