Yes - I watched Eurovision.  Didn’t you?

My personal favourite was Dracula from .  I tried to convince Mr SDS that this entry was really just a piss-take (which is what I liked about it) – seeing as the song seemed to be a rip-off of Dr Alban's 'It's My Life' (so much so that it even had the same title) but with predictable, moon-in-June lyrics delivered in an unpredictable soprano voice by a man in a wonderfully, devilishly, outrageous outfit.

Well, my joy at the 'irony' of Drac dissipated at the very end of his performance when he gave the look of a sighing diva (possibly pretending to be) overwhelmed by adulation.  Hmm.  But I'm choosing to ignore the signs because I just want to believe it's ironic. And mainly because I need an excuse to watch it again purely for his costume which I have a secret (ok, not so secret now) longing to experience first-hand - or even second-hand.   I have a guilty desire to be embraced and carried off in and to have filthy deeds done to me by the wearer of such a delight.  Not him necessarily - any man will do really - well, any man that would look good in that costume which I suppose does limit it rather a lot, perhaps completely.  But I live in hope (or should that be: "a fantasy world".)

Would a 'wink' emoticon be too obvious here, or would you think I was being ironic? 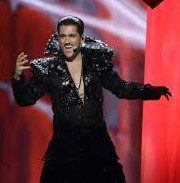 Romania didn’t do as well as they should have in my (admittedly warped) opinion, but as every cloud has a silver lining - and as I’d like to find out if that outfit does too - I’ll be searching for the aforementioned costume on eBay shortly.  Some black leather gloves would top it off nicely.

Also this weekend there was a repeat of BBC Four’s ‘…Sings James Bond’ which maintained a level of excitement rarely felt in this household on a cold May evening.  I enjoyed Moby, Garbage and Dusty in particular.  Then as I watched Shirley Bassey in her long, shimmering, spangly dress it occurred to me that I may get to the end of my life having never actually worn one.  Is it too late?