Yesterday afternoon, here in the East of England, the skies turned an eerie yellow-brown before swathes of grey merged with it like watercolour paint and the rain came lashing down.
This morning, dry and sunny, the sky is fresh forget-me-not blue, but what’s this stuff on the doorstep? On the window-panes? On the gutter, on the lid of the water butt too … dusty orange splatters and little powdery piles of…. paprika?! I wipe my finger across it softly - ah, is it sand? Indeed, a quick online search tells me that Storm Celia has picked up Saharan dust and blown it across Europe, and now much of it has landed here in the puddles of yesterday’s showers.
I can’t help but like the thought of that and find something strangely romantic about the idea that part of a desert over 2000 miles away has ended up in my garden without any human intervention. I feel the same about migrating birds and insects, fascinated by the mystery of their journey, the pure power of nature, and how these phenomena somehow shrink the world.
It reminded me of my one visit to a proper desert, 25 years ago. I was lucky enough to get a free trip to Dubai, thanks to a job at the time. It wasn’t the same Dubai then as it is now – not so much the millionaires’ megacity with its rapidly accelerating construction and outrageously tall skyscrapers, but instead both lower rise and lower key. Away from the hotels and souks and the creek with its (suitably) creaky dhows were those vast expanses of butterscotch sand, punctuated by tufted grass and some lightly smelly, but really rather lovely, camels. They struck me as being very gentle creatures. The sheer quietness of the desert was like nothing I’ve ever known. 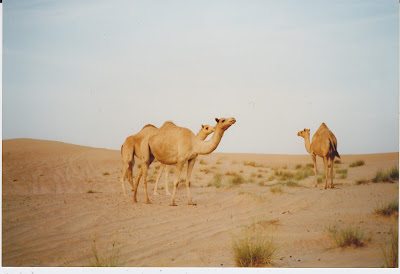 I found that trip memorable, even before the plane touched down. The two young Arab women seated next to me as we left London were stunningly beautiful and long-limbed, heavily made up and wearing designer label Western clothes - I felt hideously ugly, stumpy and shabby beside them.  Friendly and sweet, I think they felt sorry for me as, just before landing, they offered me a generous spritz of the expensive perfume they were spraying on themselves. Oh god, I clearly smelt as bad as I looked (and readily accepted). Then, in their tight skirts and shiny high heeled shoes they took it in turns to disappear to the loo and came out fully concealed in hijab and abaya, ready to return to Emirati culture after their British jaunt.
I was with a small band of strangers on that trip and we did all the usual touristy things - getting bumped about in a dune buggy as well as on a camel’s back, trying out a hookah pipe, all that. I also spent a free hour in a very modern shopping centre and found a store selling music. It was very mainstream but I like this thing of buying music when you go somewhere unfamiliar so that it's inextricably linked to your travels whenever you play it. In this instance I picked up the best thing I could find which was ‘Man’ by Neneh Cherry. Not an album I kept in the long term but, who knows, after being donated to a charity shop maybe it ended up thousands of miles away once again,  just like this morning's desert sand.
Posted by C at 15:58