That should so be the name of a band, shouldn’t it?  A no-holds-barred garage band whose super-fans throw gigantic fluffy spider toys on stage at gigs (so much more hygienic than knickers).  My sister once had a gigantic fluffy spider toy;  it had pipe-cleaner legs and red teddy-bear eyes on wire stalks, and you could bounce it up and down on the thin elastic attached to its furry black head.  As a child I used it covertly a couple of times by half-hiding it in my bedroom in a bid to scare off the little lady that came once a week to help my mum with the cleaning.   (I’m aware how terribly middle-class that is... Truth being that my mum did struggle to cope, and this was at a time when she was also reliant on another kind of mother’s little helper – the small round one commonly known as Valium). 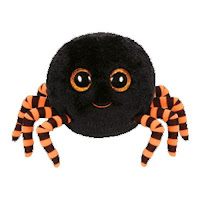 I was a horrible, naughty child and poor Mrs Sibley in her flowery overall and thick tan tights was the intended victim of my cunning plan.  I was sure that if I carefully secreted the spider in a dusty corner, the unexpected discovery of it would be enough to make her shriek and leave my bedroom in a panic.  The Betta Bilda blocks, my Francie doll and assorted plastic farm animals could then stay strewn on a dirty floor for another week.  ( I tried the same tactic with a rubber snake, but that’s another story.)

Anyway, that’s how much I believed in the power of spiders…

And I still do.  I’m convinced that if real spiders were aware of the fear they are capable of inducing, even in otherwise rational adult humans, they could take over the world.

I also believe that most of the creatures surrounding us are far superior to us in so many ways, they just lack the arrogance and vindictiveness (two purely human traits) to use it against us.   From tiny worms, blind and limbless, being able to detect minute changes in air pressure which means that even underground they can tell when it’s going to rain, to the incredible navigational sense of birds migrating thousands of miles across mountains and oceans to the exact same place each year, these are innate skills we humans can only dream of having.  Then again, worms and birds don’t know how to add a cat face filter to a selfie so we shouldn’t be too hard on ourselves...

So here is where flying electric spiders come in.  ‘Spiders Can Fly Hundreds of Miles Using Electricity’ is the sort of headline that makes my ears prick up (without the need for a cat face filter) and to my mind, totally supports the theory of their superiority.  Marvellous, amazing, fantastic spiders - I love them. We know that they are able to travel beyond where their eight little legs can carry them; they've been found two and a half miles up in the sky and 1000 miles out to sea, and recently two researchers at the University of Bristol were able to demonstrate that it was far more than just random wind power that propelled them.  Spiders can actually sense the Earth’s electric field and use it to launch themselves into the air.

These researchers "... put the arachnids on vertical strips of cardboard in the centre of a plastic box, and then generated electric fields between the floor and ceiling of similar strengths to what the spiders would experience outdoors.  These ruffled tiny sensory hairs on the spiders' feet... In response the spiders performed a set of movements called tiptoeing - they stood on the ends of their legs and stuck their abdomens in the air...  Many of the spiders actually managed to take off, despite being in closed boxes with no airflow within them..."

Now I don't know if this sort of stuff interests you as much as it does me, but you can read the full article here.

All this leads me to think that, one day when we've properly fucked up the planet and each other, leaving behind a world inhabited only by the last surviving creatures of the non-human variety, they will fare very well indeed.  Whereas me - well, Mrs Sibley did still clean my room, and moved my toys, unnerved by a fluffy spider with pipe cleaner legs - I'm merely human.

This gives me a good excuse to post some Australian '80s garage punk in the form of the Lime Spiders too, don't you think?!

Email ThisBlogThis!Share to TwitterShare to FacebookShare to Pinterest
Labels: lime spiders, nature, out of control, spiders