Some while back I used to join up with a couple of friends a few times a year to go to gigs.  The problem was that we all lived miles apart so we had this convoluted way of meeting up.  I’d drive down from Suffolk to Pete’s house 50 miles away, then he’d take us to South Mimms motorway services to meet Tim who’d driven down there from Northants.   Then Tim would chauffeur us into London to the gig.

So, getting there was fine.  And having a couple of decent gig buddies for company was absolutely great.  The part of the evening that really got to me was that third leg of the journey back at the end of our night out, the one where I had to drive that last bit home, alone through the early hours along mostly deserted country lanes.

Weary and frequently cold but not wanting to put the heater on in the rattling old Polo in case it sent me to sleep, that drive always seemed twice as long as it had been outbound.  The landmarks by which I calibrated my journey all started to blend into one.   But worse was the effect of my tired and over-active imagination. I had to fight with the more ridiculous fantastical fears that lurked in the back of my mind but which, in these dark and lonely conditions, gathered their own energy and jostled for space right up at the front, doing the stupidest things like turning lightning-struck trees into petrified witches, the shadows of road signs into gallows and kerbside shrubs into eerie, hunched over figures.  I can't tell you how many times I wondered why someone would be crouching motionless by the verge in the middle of nowhere at 1.30 in the morning. ...

I never came across that lunatic axe murderer or the ghost of a headless horseman (of course I’d have told you by now if I had, it’d have been far more interesting) nor had an experience like Morrissey did on Saddleworth Moor. but by the time I arrived home it felt like it had taken all my strength to stay focused on the road and the radio and the promise of a warm bed at my destination, without thinking I’d witnessed something terrifying along the route.

Country lanes and empty fields are indeed beautiful on a sweet Summer afternoon but why is it that after midnight they transform into something far more sinister?! 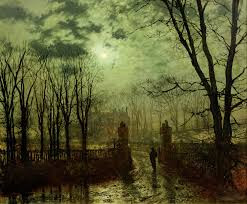 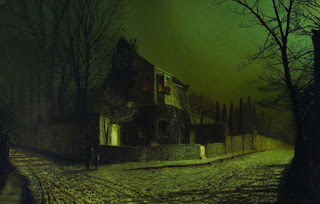 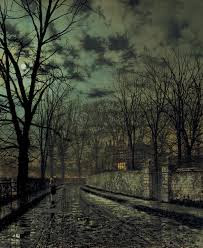 John Atkinson Grimshaw - the master of a spooky moonlit scene
Posted by C at 17:01