'A trip into the world of real psychedelia and more' ?! #2

When introducing this new series last month I explained how some musical discoveries in my twenties excited me so much that I was inspired to make my own fanzine on the subject.  It was the 1980s and the garage, psych and beat music that obsessed me was mostly from the mid 1960s - but it was so fresh to my ears that it really felt like I was indulging in something new.

Much like blogging now, I wanted an outlet, a way to express and share my enthusiasm and the fanzine was the solution. Somehow I managed to write, illustrate and design six editions, by hand.

For this series I’m going to post some of the tracks I wrote about then, along with snippets of whatever it was I said.  As the strapline of my fanzine rather grandly announced, it's ‘A trip into the world of real psychedelia and more’.

I remember wondering how to start.  So much to say!  And so excited I didn’t know how to say it!  So I started Issue 1 with some drawing instead – a doodly cover illustration with a woman with no top on…  they say sex sells.  For 15p, in this case. 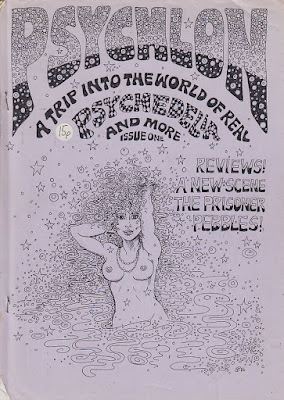 Armed with a selection of fine-tip Pilot pens, some magazines to cut up for collage and piles of records, I got going.  Issue 1 included quite a cross-section of reviews/summaries – including my favourites from the past such as the Eyes and the Action... 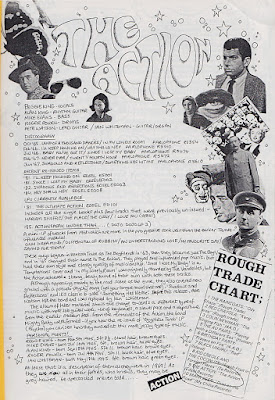 ... alongside much loved contemporary bands with a retro sound, e.g. the Nomads and the Prisoners. 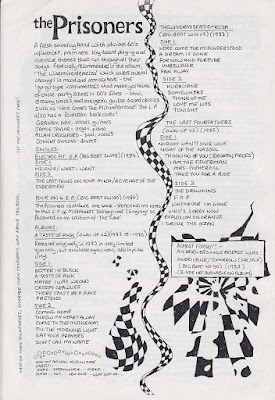 Then I launched into a six-page article on the ‘Pebbles’ series of compilation albums featuring largely unknown US bands from twenty years back. 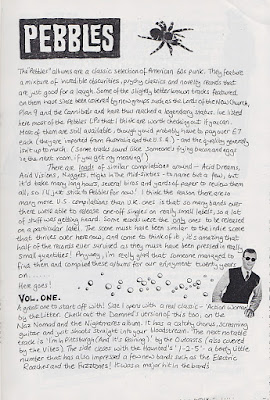 Here’s some of what I had to say about them.

“The ‘Pebbles’ albums are a classic selection of American 60s punk.  They feature a mixture of incredible obscurities, psychy classics and novelty records that are just good for a laugh.  Some of the slightly better known tracks featured on them have since been covered by new groups such as the Lords Of The New Church, Plan 9 and the Cannibals and have thus reached a legendary status.  I’ve listed here most of the Pebbles LPs that I think are worth checking out if you can.  Most of them are stil available, though you’d probably have to pay over £7 each…”

“…There are loads of similar compilations around – Acid Dreams, Acid Visions, Nuggets, Highs In The Mid-Sixties – to name but a few , but it’d take many long hours, several biros and yards of paper to review them all, so I’ll just stick to Pebbles for now!”

“… I think the reason there are so many more US compilations than UK ones is that so many bands over there were able to release one-off singles on really small labels, so a lot of stuff was getting heard.  Some records were the only ones to be released on a particular label.  The scene must have been similar to the indie scene that thrives over here now, and come to think of it, it’s amazing that half of the records ever survived as they must have been pressed in really small quantities!  Anyway, I’m really glad that someone managed to find them and compiled these albums for our enjoyment twenty years on…”

Weird to think that those twenty years are now… aargh! … fifty years on.

“VOL. ONE
A great one to start off with!  Side 1 opens with a real classic – ‘Action Woman’ by the Litter.  Check out the Damned’s version of this too, on the Naz Nomad and the Nightmares album.  It has a catchy chorus, screaming guitar and just shoots straight into your bloodstream….”

Forgive me, I was young.  I know music doesn’t ‘shoot straight into your bloodstream’.  But still, it’s a great track, so here it is.

“… The side closes with the Haunted’s ‘1-2-5’ – a beaty little number that has also impressed a few new bands such as the Electric Roaches and the Fuzztones!  It was a major hit in the band’s home country, Canada, at the time of its release…”

I loved the Fuzztones but, weirdly, I don’t remember the Electric Roaches at all.  Never mind, here’s the original from the Haunted.


You know what, they still sound fucking great.

More snippets and songs next time!
Posted by C at 22:29

Email ThisBlogThis!Share to TwitterShare to FacebookShare to Pinterest
Labels: 1960s, a trip into the world of real psychedlia and more?, pebbles, the haunted, the litter