The bag I'm in

“Is it retro?” asked Mr SDS when I told him, rather unfairly, that I'd just ordered a book but I wouldn't reveal what it was. The answer was “yes” and it's perhaps for that reason that I didn't want to discuss it before buying it; almost like I didn't want to be dissuaded or to hear myself justifying my rash purchase. We do sometimes have a difference of opinion when it comes to things 'retro'.

I'm interested in the past – but that certainly doesn't mean I don't like the present, there's no mutual exclusion.  However, Mr SDS would readily admit that he has a bit of a downer on the past because he's had a little too much exposure to people who are stuck in it - I mean, stuck immovably - and I completely agree with him that it doesn't seem a very healthy place to be. It particularly irritates him when folk fixate on it and go on about how much better everything was “back then”. Likewise, it doesn't strike me as being much fun to truly hanker for days gone by - the present suits me fine and I don't think too far ahead either - but that doesn't prevent my enjoyment of a little retro indulgence now and then. Well, you probably already know that from reading this blog.

For me it's just about relating; connecting past, present and future and tying it together.  Being a part of it all. Everything before us has shaped the now, everything is valid. In particular, old pictures of “the way we were” sum my feelings up beautifully and make me smile and that's why, when I saw this book advertised in the Guardian (currently discounted with free postage too!) I had to buy it. It's 'The Bag I'm In' by Sam Knee (Cicada) and the blurb which originally caught my eye goes:

Youth subculture in 20th Century Britain is a unique phenomenon. Throughout the decades, young people sought to define themselves sartorially, reflecting their identity in terms of regionalism, class and crucially, musical taste, through their clothes... The look of each movement is captured in meticulously researched, previously unseen archive photography.... a key resource for fashion enthusiasts, musos and cultural historians, as well as a powerful, graphic document of Britain's fashion evolution through the ages.

It arrived this morning while Mr SDS was out and I'd been dying all day to take a break from painting imaginary puppies to have a good look through. At last! It's a chunky hardback book with nearly 300 pages, and I could tell straight away that it's been put together by someone who gets it, someone who understands and who's been there or, when writing about things that were before his time, has checked all the facts. I do find it annoying, for instance, when you're watching a TV programme with a narrative specifically about 1977 punk but it's illustrated with film of kids who are very much from a later punk incarnation, all ten-inch long crazy-colour mohicans and The Exploited emblazoned on the backs of their studded bike jackets... no!  There are no such errors here.  Instead, we're reminded of the detail: of shop names like Melanddi and Flip, of bands as diverse The Milkshakes, Disorder, John's Children, of Gibson creepers, Swell Maps badges, Poison Girls patches... There are grainy photos of '60s beatniks and mods, some early shots of band members before they were well-known, e.g. Lee Brilleaux pictured with the Southside Jug Band in 1967, plus plenty of heartwarming images from the '70s and '80s of ordinary kids whom I know felt extraordinary at the time - I know because these could be images of you and me, our friends, our schoolmates, our brothers and sisters. 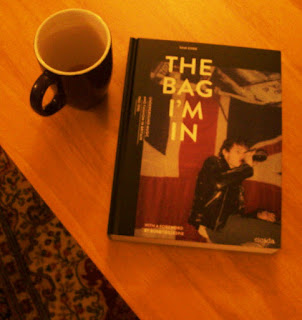 * 'Why and how music youth scenes reach such a level of diversity and focused intensity in Britain is a side effect of island culture and the distinctive class system in this country. By and large, British music scenes are working and middle class in origin. The upper classes don't have the regionality or subversive sartorial suss to create such subtle nuances. The seeds of the scenes originate in the generic state school system; secondary moderns, comprehensives and grammar schools – where kids exist on a street level around other kids and cultures in the great mishmash of society that makes up Britain.'

Anyway, Mr SDS came home this evening and I showed him my lovely new book. I really hoped he'd like it, and see what's appealing and touching about it, in spite of possible resistance to its obvious retro theme. I was just flicking through it when my fingertips paused unknowingly at the chapter on Anarcho Punk.... and there it was, a photo of his old band. Above it was another photo which included a poster for them for a gig he played, where I was too. Ohh! We remembered it well.  That's what I mean: it's about relating; connecting the past with the present and the future and tying it together.  Being a part of it all.

It's a great book!