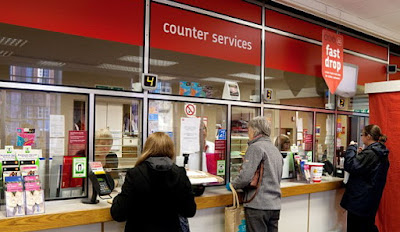 I was stood in a Post Office queue today, a couple of places in front of that man who you know. I know you know him, because he gets everywhere. He's been in nearly every queue I've stood in, in nearly every place I've ever been over many months and years; I'm sure you can say the same.

The minute he walks in through the door of the Post Office, or the bank, or the Co-op, and sees the queue, he starts. He huffs audibly, and puffs too. In his lengthy repertoire of sounds he also includes a tut, a tsk, a sigh, a tch, a pfft, a chuff and a sniff. He may pepper his puffing with a few half-finished sentences, along the lines of, “Oh now she's...” or “Oh what's he...?” as he obsesses over every action and interaction taking place behind the counter, then he pfffs and he phews and he hhhhs again. All of this is to no-one in particular but you get the feeling he wants to engage you in his show of disapproving impatience, hopes that you'll join in perhaps, or at least express some kind of solidarity – a casual eyes-heavenward glance or an insincere smile would do.

I felt so calm until he arrived – acceptant of the long wait, disengaging my mental gears and letting my brain coast for a while. I read a couple of posters on the wall, although I couldn't tell you now what they were about. I only noticed that the woman pictured in one looked a lot like the lady I see walking her dog every morning, but without the frizzy hair. I registered that all the generic white type on red packaging and advertising was a bit overpowering en masse. Far too much red everywhere. Would it look better if it was blue? Probably not. I looked at my phone and vaguely realised my clock is a couple of minutes slow. Must sort that out. I observed that the woman a few places in front of me had unusually thick ankles. What can you do about thick ankles? Not a lot... only wear trousers? Well, not only – I mean, wear a top too.... That kind of thing. It gets you through for as long as it needs to, an array of pointless thoughts filling the void of waiting, it's just what you do, just what you have to do.

But Mr Huff'n'Puff disturbed my relative peace. Once he started it was impossible to tune out. Huff puff tsk tsk “oh now what's she...” pfft huh sigh puff.....  it's incessant! I wish I could've told him to please keep quiet: it's simply a queue, it won't move any faster just because you're making all that fucking noise, I suppose I should feel sorry for you but I can't any more because you're your own worst enemy and all you're doing is getting to the rest of us now which is worse than just being stuck in the queue in the first place – in fact we were fine before you came in and made us all acutely aware of just how unfine it is. Grrr!  See what I mean...! I was ok until....