What we get up to when we're not there 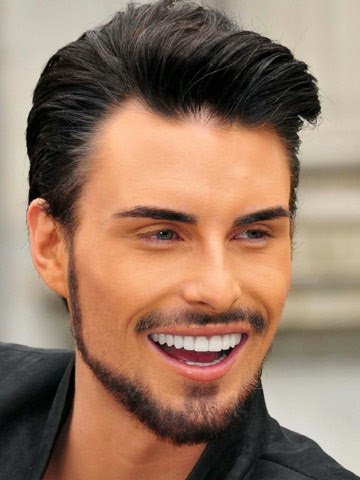 (before the new hairstyle)

Rylan Clark has grown his hair long and dyed it a rather fetching shade of aubergine. Or is it burgundy? I don't know but it's very shiny and sleek; it looks like nylon. Or doll's hair. Or perhaps doll's hair IS nylon. Anyway, I only know this because I met him the other day when I went to some launch event thingy at a local university. He was kind enough to escort me from Reception across the grounds to the main hall and I was struck by how genial he was and wonderfully easy to talk to. It was like we'd known each other for years. We were getting along so swimmingly that he put his arm around me as we walked and I can still recall the soft feel of the loose-knit cream jumper he was wearing. His arms were so long that his left one looped right around then up under my armpit and at one point he... well... I suppose, had it been anyone else, like a straight man doing it without my permission, I might have used the term, “touched me up” or maybe “copped a feel”. And it would've been a very different scenario. But somehow, it just wasn't like that. It was a kind of comforting and chummy “cupping” instead. Dare I say, enjoyable?

Nothing particularly memorable happened at the venue after that but I arrived home in the afternoon and noticed from the kitchen window that Mr SDS was outside, hanging up the washing. For some reason, he wasn't using the normal line; instead he'd erected one of those rotary airers. I didn't think we had room for one at the bottom of the garden but I was obviously mistaken. I walked down to greet him and was somewhat confounded to see that, having pegged out all the pillowcases, he was now hanging up the suet cakes for the birds. There must have been about twenty of these at least, all suspended from the cords on the airer itself, so that they actually hung right against the clean laundry.  Only it was, of course, now no longer clean - instead every item was encrusted with hundreds of little spatters of white fat. One half of me was delighted that he should be putting out the bird food (that's usually my domain) – and so much of it too! - but the other half was appalled at his choice of where to place it.   Very unlike him. “What are you doing?!” I called out, my surprise matched only by my annoyance. I never got to hear his reply. I opened my eyes slowly and the light filtered in, accompanied by sounds too, the sounds of the morning... a distant song thrush, tyres on the road, the whirring of the central heating pump as it stirred into life. I lay there and reminisced. Rylan Clark copping a feel!

I know nobody ever really wants to hear or read about someone else's weird dreams (unless they're in them, so Rylan may be interested) but in the absence of anything meaningful or riveting to say here at the moment, I'm afraid that's what you have.
Posted by C at 21:42

Email ThisBlogThis!Share to TwitterShare to FacebookShare to Pinterest
Labels: dreams